Golden Moments in Our Memory 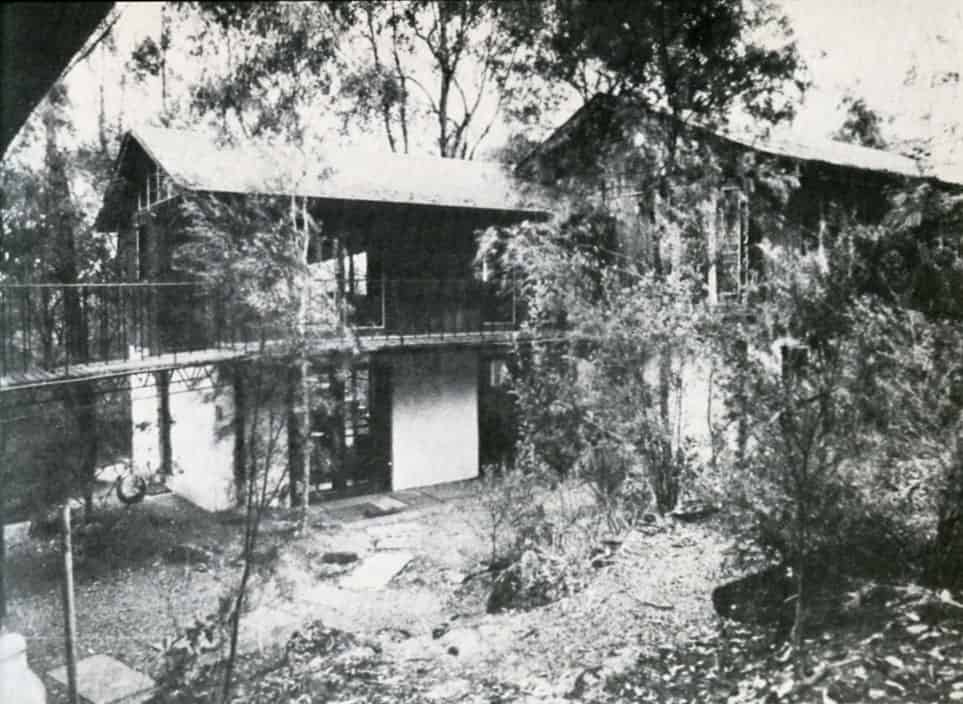 The Downing house which grew from a weekender in the 1950s

Eltham's progressive community stood as one solid group against all odds until the middle 1950s when there came about a gradual awareness of a changing social climate.

It was caused by several factors.

First, there was the rapid increase in population, predominantly due to the great postwar migrant influx that had an enormous impact on our behaviour patterns. especially as more then three-quarters or the New Australians settled in Greater Melbourne.

Second, this unprecedented advent caused an industrial and building explosion that created radically altered building conditions and expectations. It, was a time that knew no limit to growth. The opportunities seemed infinite.

Australian parents with young children were taking on up to three Jobs between them. They started making more money than they had ever believed possible. This work generated parental absenteeism that soon affected home life standards. Both parents working up to five, six and sometimes seven days a week produced new residences, cars and a great range of mechanical amenities for the whole family, but only by forfeiting the less spectacular but more important values they had hitherto known.

The children were the first to appreciate it. They quickly accepted the hard-won privileges as their unalienable right, as liberal gifts and pocket money became substitutes for parental participation in their leisure times. By 1960 we were a fragmented society. Many parents had lost touch with their children and children felt their parents belonged to an unknown generation. Then, in 1960, the bubble burst. Judgement fell on the nation in the form of a severe recession.

The tremendously stable Menzies Government came within an ace or losing the next election as post-war financial institutions crumbled around them. In Victoria the apparently impregnable Korman land and building empire suddenly vanished and its originator, Stanley Korman, was imprisoned for improper practices.

Yet, despite the uncertain times, it was well understood that pre-war conditions could never return. Australia had developed into a young adult nation in its own right and would have to find its own way back to prosperity. This it did - thanks to the continuing flow of migration even in opposition to the White Australia policy. We gradually stopped calling Italians, Greeks and even Turks derogatory names when they started to live in our streets and became successful businessmen and women. The stigma of having a Mediterranean name disappeared altogether when names like Barassi dominated our traditional game and excelled in track and field events. Even the cricket field was not immune from foreign invasion.

Eltham attracted a disproportionate number of Dutch migrants, partly because they were drawn to the hilly landscape which made it so different to the flat country they had left

They proved to be people or real quality, combining special skills and national traditions that have given a lead to our district ever since. One has only to recall names like Herman and Martin Sibbel, Bill Van der Voorden, Peter Hellemons and the Deylen family to realise how their coming enhanced our building and other abilities. They often succeeded better than we did and also became true Australians in the best sense of the word.

I knew these men in my everyday life and found they possessed real integrity. fairness and business acumen that has been a constant source of education to me since I first met them. Both native and foreign inhabitants realised that there was a special ingredient in the Eltham lifestyle that did not exist elsewhere. It occurred because the original landscape still remained intact and generated a sense of open skies, bushland gullies and environmental adventure that made it unique amid the burgeoning suburban population of other districts.

Despite our best endeavours, the district could not help advancing economically to bring about divided interests in the community. I believe the early post-war Eltham inhabitants who combined with the Dutch and other northern European migrants formed a progressive group who opposed attitudes of the pre-war inhabitants. The latter tended to identify with the incoming conservative and liberal factions that created a political climate or dispute. The catalyst that brought them into opposition with each other was their reaction to the indigenous environment. One group loved its wild untamed originality. The other side was always anxious for it to conform to the English suburban standards they had always espoused. The reverence many retained still retained for members or the Royal family tended to puzzle or amuse the post-war migrants who had watched its influence disappear in their homelands during both world wars. And so the community fought over the regrowth of native trees, the retention of unmade roads, bad drainage and anti-suburban living versus the development of shops and commerce and an increasing conformity to "proper" suburban standards or wide, smooth roads with raised concrete kerbs and channels. In short, the basic argument ranged around growing or cutting out trees.

There was no greater exponent of native tree growth and natural landscaping in 1955 when these issues became central to the retention of the Eltham lifestsyle than Dorian le Gallienne.

Despite his French name, Dor an was Australian. He was one of the most distinguished minds that Eltham ever knew. He was a composer of international standing and considered by many Australians to be the best we have produced. He lived with his lifelong friend, Professor Richard (Dick) Downing, in Yarra Braes Road on the river. He loved and appreciated the primitive Australian flora in which he could discern the finger of God. I designed three extensions to the original weekend mud brick house we erected for them in 1949, the first or which was built In 1954.

Those who worked on that extension were a true cross-section of the progressive Eltham community to which I have been referring.

They included both Herman and Martin Sibbel. soon to branch out and become very successful building designers and contractors. Clifton Pugh and John Howley, who were emerging as name painters, and Gordon Ford, the rising landscaper and two or three other carpenters and laborers,

Work would start at 8 am each morning and Dick and Dor would appear from the origina! wing, where they were still sleeping pending completion of the extension, about about 9.30 to 10 o'clock. It was nearly autumn when we commenced building and the whole construction appeared to be immersed In the misty dripping bush at that time or day. There was no formal garden. The natural ground cover came right up to the door and was carefully conserved by the owners. Eltham's riotous bird life carrolled, whistled, chirped and laughed with an incessant clamour that, mingled with the sound of sawing and hammering which echoed along the shadowy valley.

The first indication that we were to be supplied with morning tea would occur when Dorian appeared with a plate of porridge for Dick. This meant the tea break would be due any minute. Once or twice Dick decided to sit down to eat his porridge but Dorian would have him back on his feet within a few moments. "Dick." he would say in a slightly mocking tone that couldn't be argued against, "gentlemen always eat their porridge standing up."

After these preliminaries. Dick would appear with a silver teapot and we would all sit down outside the house and watch the sun breaking through the morning clouds. There would always be a Mrs. Mitchel's cake or some other delicacy to go with it, And then the conversation would begin. Dick and Dor were both brilliantly witty conversationalists and in a few moments we would all be off together on a romantic journey into some philosophical backwater. Everyone would join in, Herman Sibbel's English was not then 100 per cent in either grammar or pronunciation. As he often prefixed his remarks with the expression "Ah Jees", he was not always as understandable as many may have wished.

Those morning breaks were never less than half an hour in length but no one minded. The jobs were always cost plus and no contracts were ever signed. It all worked on trust, Dick and Dorian realised that they were paying but in the end the mutual responsibility of those at work saw that. It was made up to them in other ways.

There were also times when silence would descend on the group for a minute or so as we observed a yellow breasted robin braving its fear and hopping into the circle to snatch up a few crumbs of cake. They were golden moments that carved themselves into our memories forever. Men from a wide variety of callings and backgrounds were merging into a single entity as they considered the pristine purity or the landscape a net thought about its infinite Creator. The mystery and wonder or the real Australia was manifesting itself.