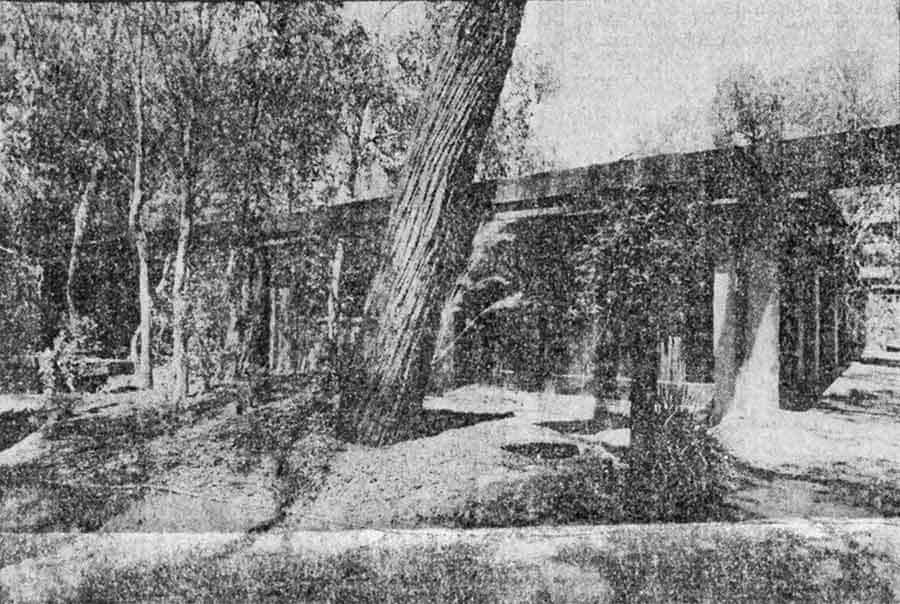 ALISTAIR KNOX is an escaper. He has fought the invaders and lived to tell the tale.

He lives in a two hectare liberated zone with well-camouflaged buildings that lie among the eucalyptus trees on the outskirts or Eltham.

Since Eltham is on the outskirts of Melbourne, it might seem that Mr Knox ls a long way from the mainstream of life.

The truth is quite the reverse. As an architect - he hates that word, and prefers designer - he has made a profound impression on the movement for alternative housing.

The eight buildings on the property range from the 370 square metre main house. nearby bungalow and circular bluestone office (90 square metres) to a tiny gatehouse, barn and stables.

Built into the side of a hill, the building materials and style all connect the earth with the need for accommodation. "The principle or all design is the indivisibility of buildings and landscape," Mr Knox says.

The materials are lumber (mostly dark oregon), slate (most of it secondhand) and mud bricks. "To the middle class question about why they (mud bricks) don't melt in the rain. The short answer ls 'Because they don't'," he says.

Perhaps that short attitude stems from the tough encounters with the middle class invaders, or developers, who wanted to turn Eltham into another brick veneer collection or wall-to-wall mortgages.

Designer Knox and his colleagues - some or them writers and artists - fought hard to retain the area's natural beauty. His experience and his buildings pushed him on to the Shire council, including a term as Eltham hire president. and made him a leader in the environmental building movement,

The story or his home has been told "more times than· I can count" In books and magazines, and perhaps most expressively every time the property is opened to visitors, of whom there are some 4000 a year.

They discover a main house that captures some or the essence of the bush that Mr Knox loves so much. It is dark and brooding in me places, light and colorful in others, and every room opens on to a verandah.

It has four bedrooms (one with ensuite), a huge kitchen and living area more than 18 metres long, livingroom. studio and bathroom/laundry. Both the nearby bungalow and the office are self-contained.

It is a lot of space, that has grown to meet the needs or the Knox extended family, which numbered 10 at one stage.

But while the rooms are big. they are thoughtfully and purposefully so. The livingroom, for example, is 11 metres long by 7.3 metres wide by 3.7 metres high - the same proportions as those of a mud brick.

Alistair Knox has some nice ways to describe it. "Elegant not beautiful. sophisticated not crude." he says, playing at middle class ad copy writing. The real ad meanwhile, has it as "a turning point in Australian architecture".

The question is, who else could live here?

It would make a wonderful home: It would also make a superb conference centre or retreat house. Someone needs to make it their own alternative.