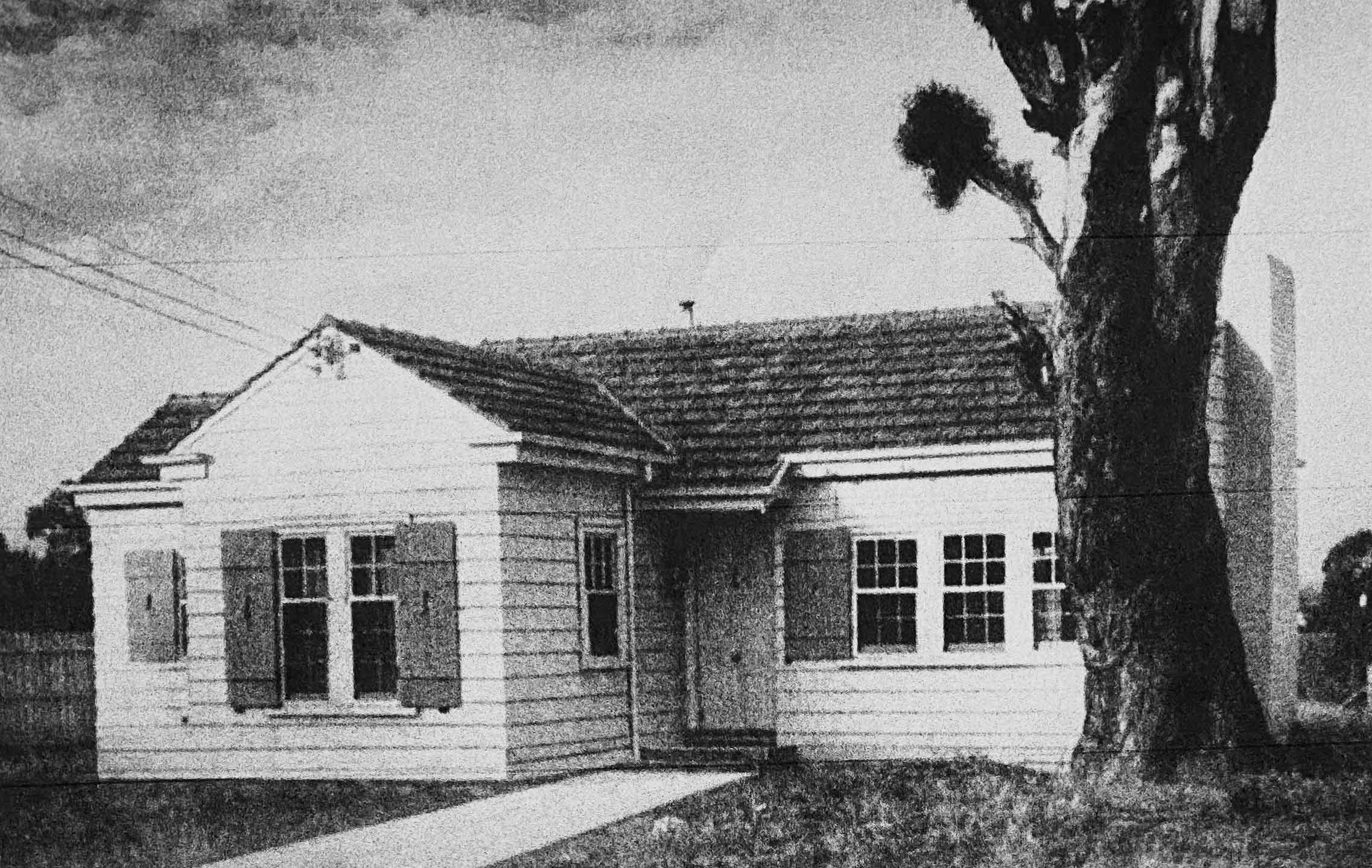 This attractive little house is an essay in domestic planing undertaken by its owners, Mr. and Mrs. Alistair Knox with the idea of accommodating as expertly as possible the needs of a young family, while at the same time creating within definite budgetary limits a background, for daily living which would have individual charm and interest, A semi-rural setting at Heidelberg has been chosen for the site which commands fine views of surrounding open country, and the garden is being planned so as to preserve as much as possible of the natural beauty of the bush.

The steady practical sense, and freshness of outlook with which Mr. and Mrs. Knox have tackled their problem is evident in the logical simplicity of the logical simplicity shows one or two original features, and in the amount of roomy living space and generous window allowance ensuring a maximum of sunshine from all aspects. 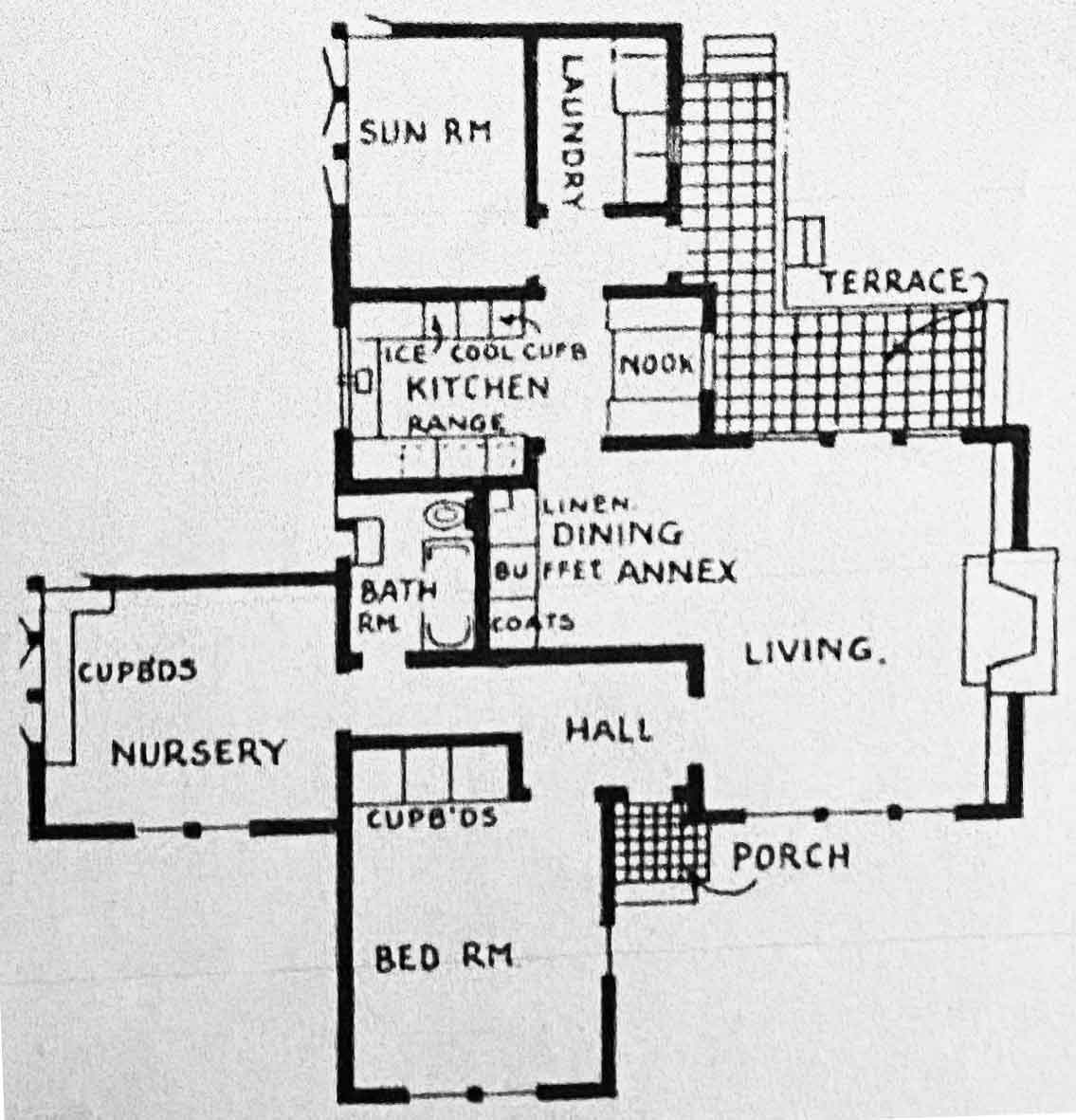 White-painted redwood boards, unrelieved by any contrasting "trim" have been used for the outside walls, and the simple "Early Colonial" character of the design has been emphasised by twelve-paned Georgian windows With shutters painted blue. The frontage is broken by a central projecting gable which accommodates the main bedroom, and the low-pitched tiled roof is extended canopy-wise over the recessed front door to form an entrance porch. The raked bricks of the main chimney are painted white. The front door which is also white, with handles and knocker of antique brass, opens into an entrance hall flush panelled in tulip oak which on right enters a wide L-shaped living room, and on the left the main bedroom. narrowing beyond the later into a short passage leading to bathroom and nursery.

The living room combines both lounge and dining annexe. A brick open fireplace is centred in the wall facing the door, with builtin bookshelves on either side. Windows in the right hand wall overlook the front garden, while on the left a glass door set between two full length windows opens on to a garden terrace paved with hand-made bricks. This expanse of window serves also to light. the dining annexe in the farther wall of which is a built-in dresser with shelves for the display of china. A full-length cupboard with matching flush door is builtin on either side of the dresser, one for coats and hats and the other for linen. The latter also makes an excellent drying cupboard as the miniature briquette heater which supplies all the hot water for the house has its home therein, being fuelled through a small door opening from the kitchen. 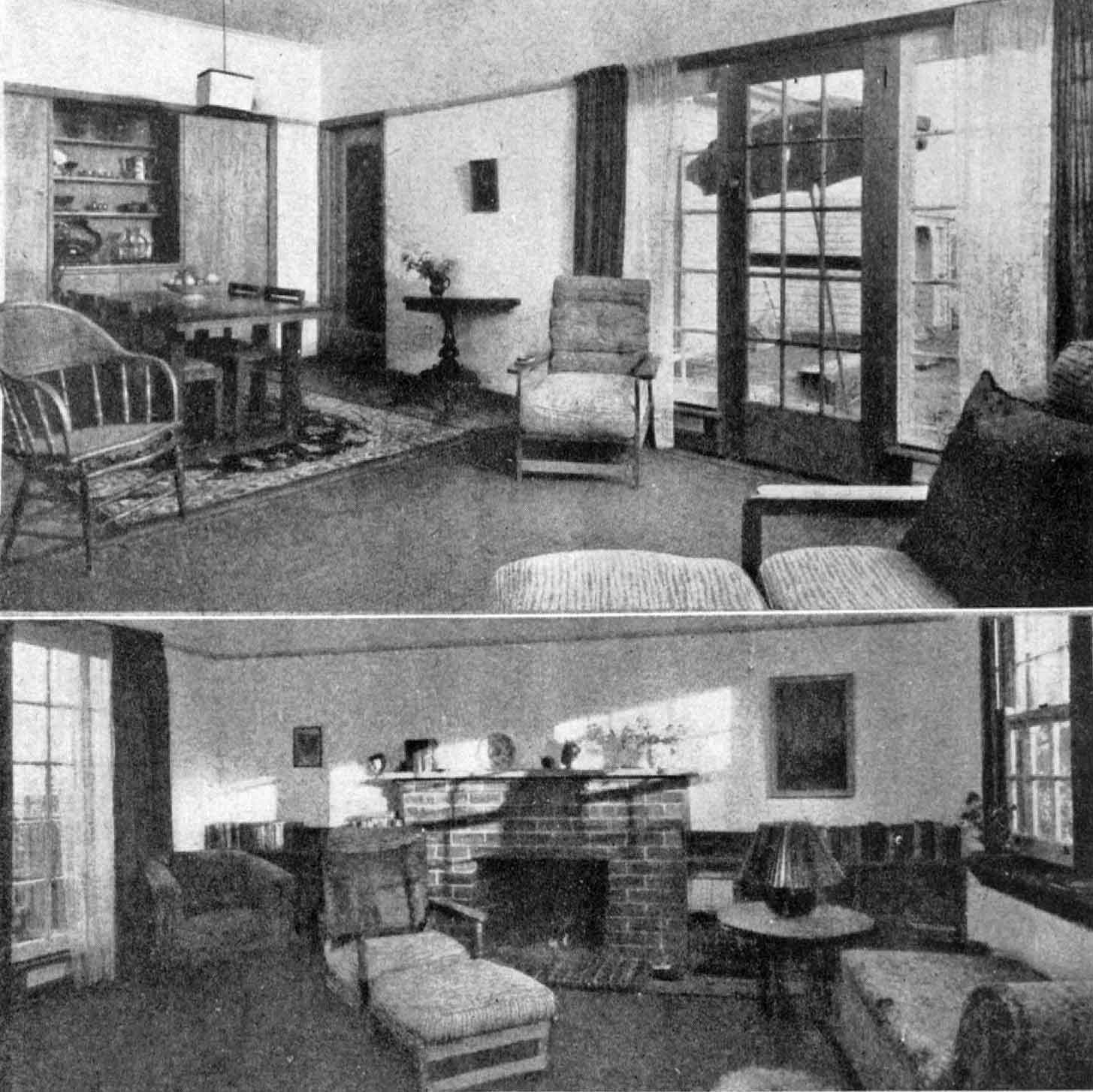 Two views of the Living room, the upper one showing the Dining Annex.

Generous space and careful thought have been given to the planning of the kitchen, which has a cheery breakfast nook with its own window looking on to the garden terrace. It is placed on the right of the door entering from the dining annexe, conveniently apart from the working area which is on the left. The latter is lit by a second window in the opposite wall under which is placed sink and draining board with work benches on either side terminating on the left in an electric range, and on the right in ice chest and draught cupboard. The door from kitchen in to back vestibule is placed next to this food storage space, thus making easier the putting away of supplies. The vestibule provides passage from the kitchen to the outer world and the garden terrace which is continued around from the living room, and to an up-to-date laundry and a very useful sunroom.

Nursery and bedroom alike have roomy cupboards, the former built-in under a large corner window and including toy-cupboard and bookshelves, and the latter along the inside wall by the door, providing full-length hanging and drawer space.

Furnishing and choice of colours have been skilfully handled to produce harmony without monotony and the lively interest of contrast without spoiling the feeling of unity and space. Moon-white interior walls, woodwork of natural waxed hardwood and floors, with the exception of the living room, covered from wall to wall in a close-woven coconut matting practically matching the woodwork, provide the base on which the colour schemes are built. In the living room and kitchen there is an undercurrent of blue, beginning with the clear azure of the outside shutters, deepening to blue-green in the Michael O'Connell prints in the living room, and hydrangea blue in the kitchen. Bright striped Mexican rugs add interest to the entrance hall, where there is also a dwarf fir tree set in a green Chinese ginger pot, and a Mexican rush coolie hat hanging on the wall, The living room has a plain carpet of midnight blue, with floor length side curtains In a peacock shade, and glass curtains of beige voile. The blue and green Michael O'Connell prints, on armchairs framed in natural waxed hardwood, are varied by a couch and easy chair covered in close patterned Egyptian tapestry in dark red, blue and terracotta. The dining annexe furniture is of blackwood and jarrah and the rug under the table is black, beige and turquoise. 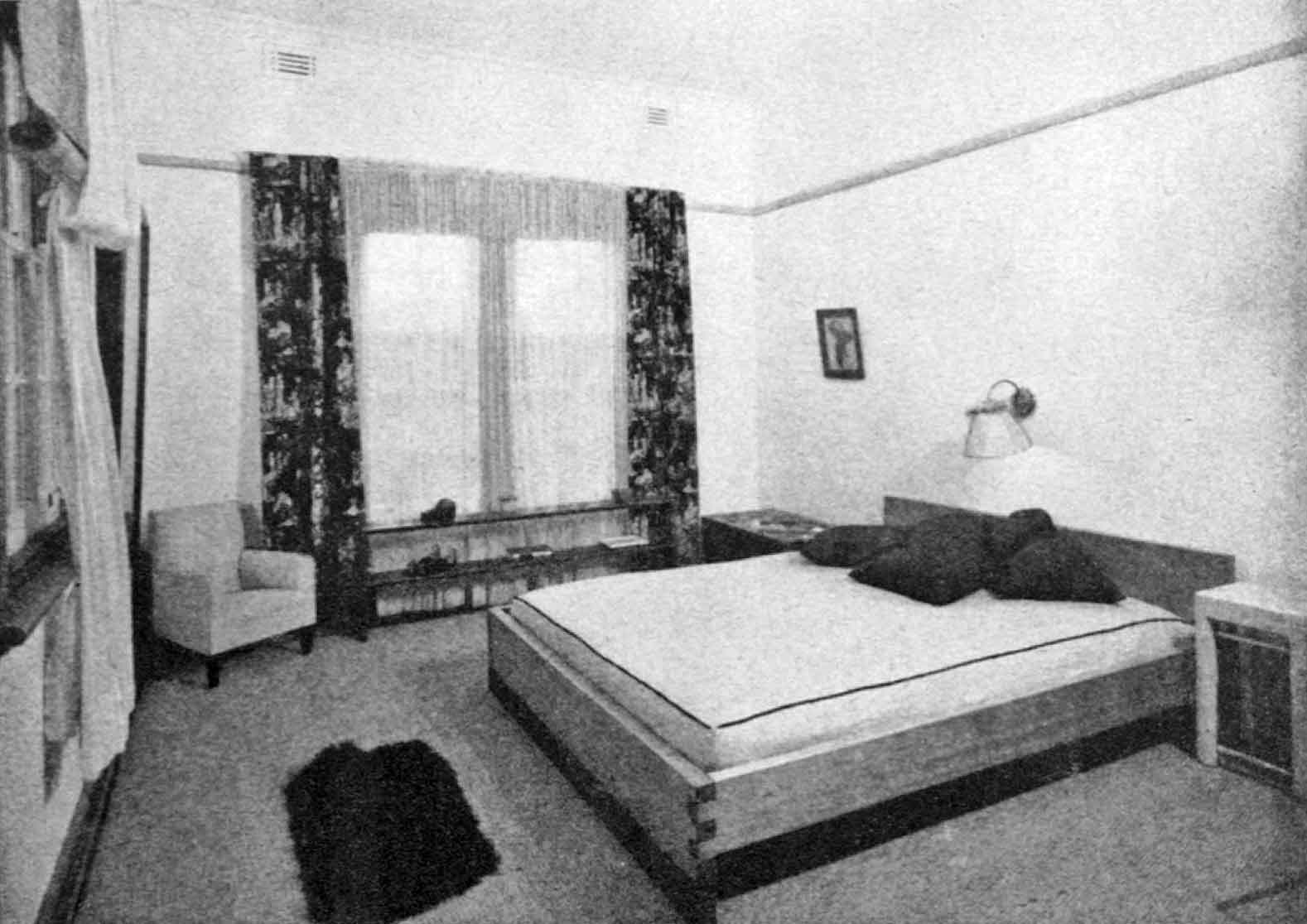 Both Bedroom and Nursery have beige as the background of their colour schemes.

Hydrangea blue linoleum and moon-white walls and woodwork are the chief points of the kitchen colour scheme. interest being added by the use of square bottles on open shelves for the keeping of such groceries as provide a bright colour interest. The lift-up seats in the breakfast nook have cushions covered with Dorset cloth dyed blue to match the floor covering. and the light above the table has a shade of white linen edged with red. The window above the sink has ruffled curtains of blue and white muslin, and all the legs and bases of the furniture have been thoughtfully provided with navy blue "kick-pieces." Vestibule, laundry and sun room are covered with the same hydrangea blue linoleum. 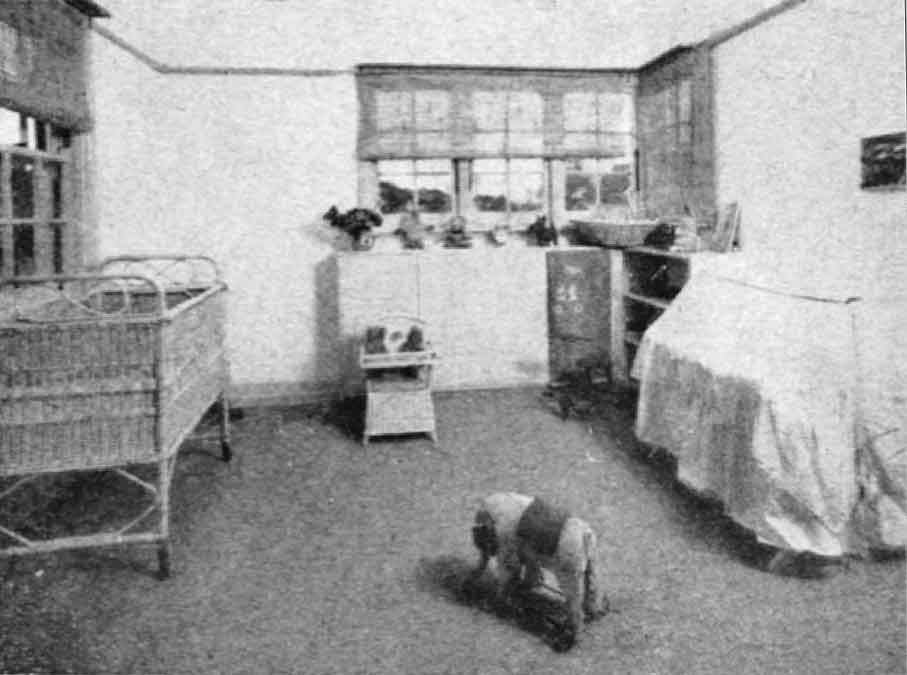 Beige is the basic colour in bedroom and nursery, the latter relying for its interest on bright-coloured children's toys. The low divan bed in the main room has a tailored cover of natural linen piped in maroon to match the frame of a large mirror which. in conjunction with two low shelves built in front of the window. creates something new in the way of dressing tables. Pillows on the divan have plain covers of maroon and green, and the curtains are of black linen with a design of Chinese figures in old ivory and touches of green and red. A chest of drawers is lacquered in Chinese red and the armchair beside the window has a cover or canary yellow linen. The lamp over the bed has a hand-made shade of natural raffia,