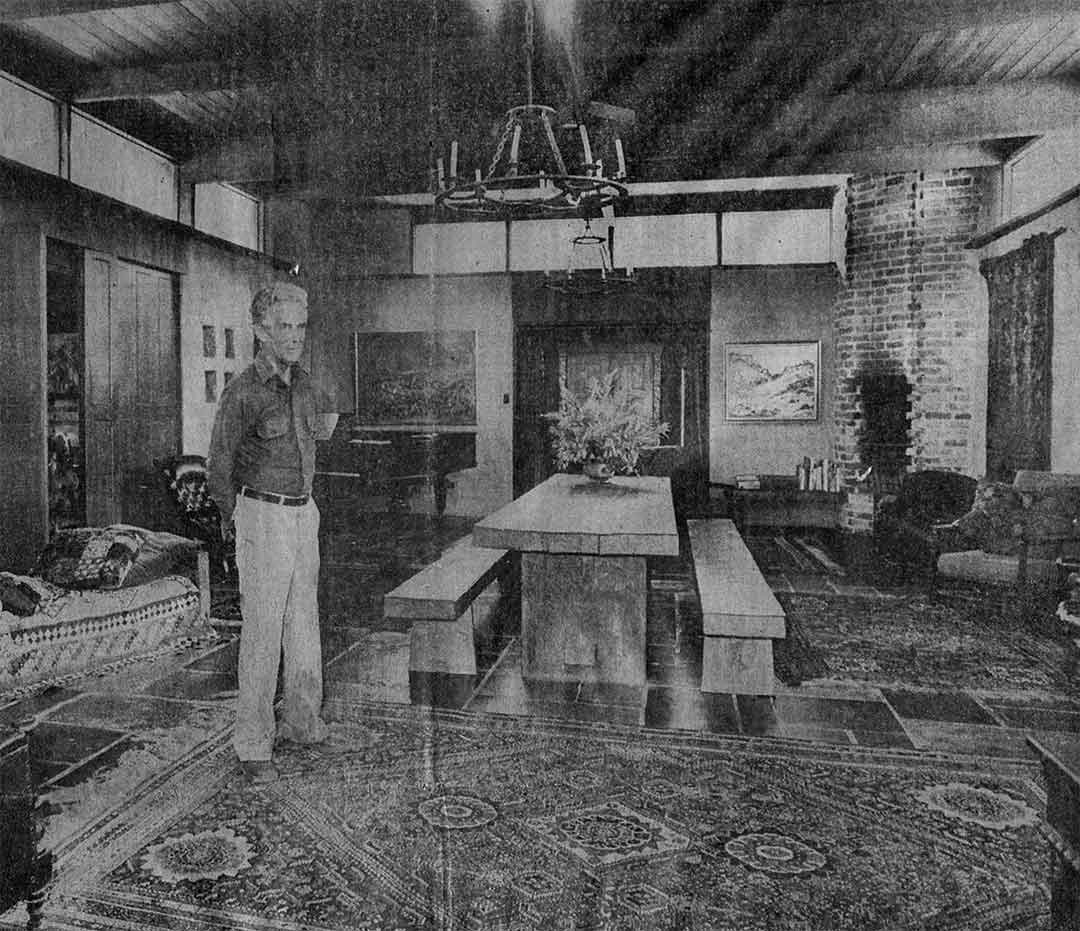 Alistair Knox in the huge living area that swallows with ease the massive timber furnishings. The room is bathed in light from the ceiling-height windows

Alistair Knox in the huge living area that swallows with ease the massive timber furnishings. The room is bathed in light from the ceiling-height windows FOR Alistair and Margot Knox, a home is much more than four walls, a roof and furnishings. Their home is one part of a totality of house and land, life and work, of living and doing.

Alistair Knox, landscape architect and social visionary, and Margot Knox, impressionist painter, live in a 370-square metre (40-square) mud brick home at Eltham. Mr Knox started building it in 1965 and it has been growing ever since.

He was born in 1912 in Middle Park, and has lived at Eltham since 1947. The community has been as much his home as any structure he has inhabited, "It's been a wonderful environment. A latter-day Australian Bloomsbury.

"It has been, he says, "an environment where the rich and poor, famous and unknown have lived and worked together without division, enriching themselves and the community."

His own periodic descents into financial poverty have helped shaped his home, and the whole breed of natural-earth-orientated houses he has helped spawn.

His home, of imposing thick wooden beams, massive slate flagstones, handmade Hawthorn bricks and natural textured mud bricks, is made almost entirely of salvaged material. The home is solid, massively strong, and grand while being totally without pretension.

There are jarrah timber beams rescued from the Appleton Dock in West Melbourne. Huge stocks of timber from the Preston Meat Works. Every bit of wood in the house has been salvaged - "not because we were clever, but because it was cheap and available".

"People have got to be free of pretensions when building in mud brick. And, it helps if they're poor. The less money people have when building this type or home, the fewer mistakes they're likely to make.

"House and land should be indivisible, and the poor are more likely, through necessity, to put up with the natural constraints of the land. If they do not have the money they have the vision. We did our best building when on the verge of bankruptcy."

It is a true family home with a spacious separate area at the back where Mrs Knox's mother lives, and plenty or room for whichever or the the children from Mr Knox's first marriages happen to be at home.

At the rear of the main home is a marvellous two-level dwelling made by Mr Knox's son Macgregor when he was 15. It is made of old electric lamp-posts, filled between with wattle and daub, and topped with some salvaged iron roofing. The roofing material cost $7, the only money outlaid. This small building is a fine summary or the Knox building philosophy.

Near this is a wattle and daub smithy's shop being built by Mrs Knox with and for another son, Alistair. At one time some years ago the family made a huge wooden carousel. The top or this. with its rough wooden spokes, has been salvaged as the ceiling for the smithy.

The main home is dominated by two main living areas. There's a huge inner living area that swallows with ease its massive timber furnishings. The room is bathed in light from the ceiling-height windows around all four walls.

The light picks out the slate flooring and the subtle colorings of the furnishings; the whole made colorful by Mrs Knox's paintings and scattered Persian rugs.

The earth walls have a pale apricot tone. The mud bricks were rendered by Mrs Knox using clay from the outside road with the exact shading she wanted, "Women make the best builders," said Mr Knox.

Then there is the kitchen area, the scene or the latest extensions. It was already 14.5 metres long by 4.5 metres wide - the addition has created an entrance area 3.6 by 7.6 metres.

The extension meant losing a main source or light into the room. The loss was made good by the addition or stained glass skylights of Eastern influence and great beauty, made a close friend, Carloyn Brophy.

We ate lunch at the refectory table with one of these luminescent skylights shedding light from directly above. Eating Mrs Knox's wholemeal bread and a tossed salad in that environment felt more enriching than a banquet in a splendid city restaurant.

Mr Knox's new book. 'Alternative Housing - Building with the Head, the Heart and the Hand, shows how for him, life and home and work are inseparable. And, good bread is just as important a part of living as the home the family has patiently built.

ln between chapters on alternative dwellings and mud brick building methods and the constant need for natural light in our homes, are chapters on bread making, on alternative education, and on the history of the Eltham community.

The Knox home is the perfect expression of this integration or all aspects or life. It is a home which lives, combining beauty with purpose and uncompromising integrity.

"Sometimes though," says Mr Knox, "we feel like pulling it all down and starting all over again. There's so much more we could do. So much we've learned along the way, and haven't done."