House that Captures the Country's Soul 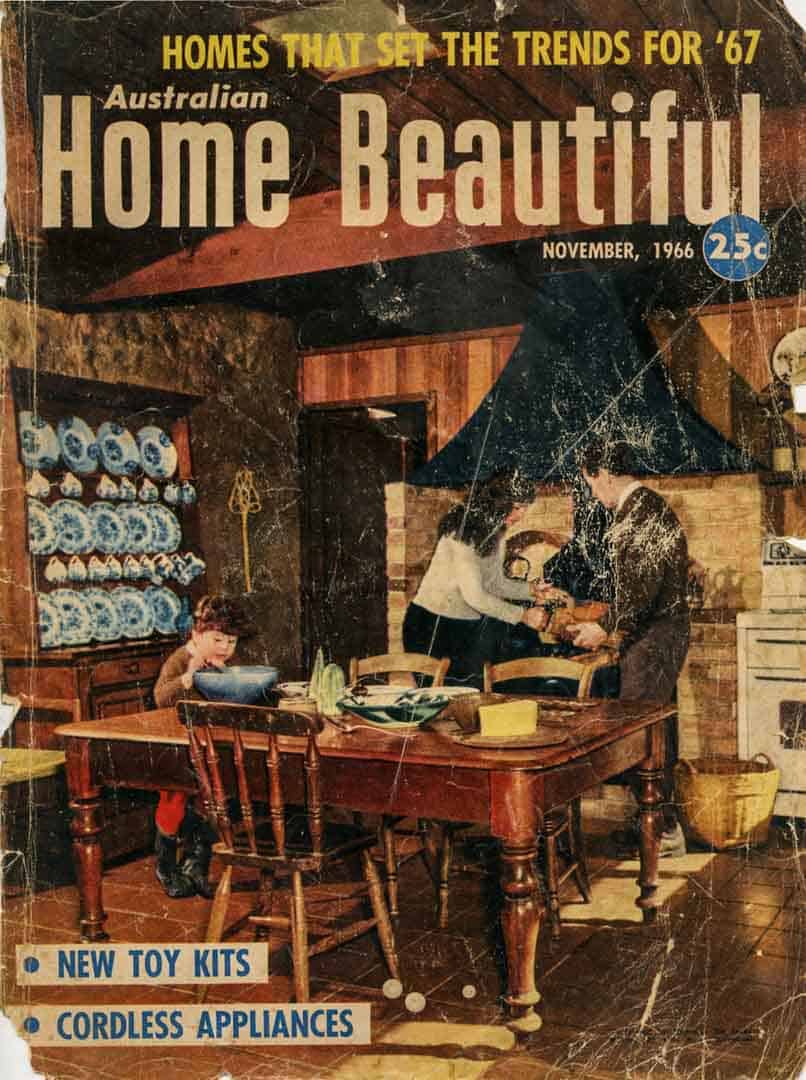 Eltham, a deceptively somnolent, semi-rural community 16 miles from Melbourne, today sees the flowering of an architectural ideal that is exerting a profound influence on Australian domestic architecture.

It is the maturing of a 20-year endeavour by a man who, holding no architectural degree or diploma (he has had no formal training in the art) is yet widely, if tacitly, acknowledged in the profession to be Australia's leading exponent of environmental design and building. 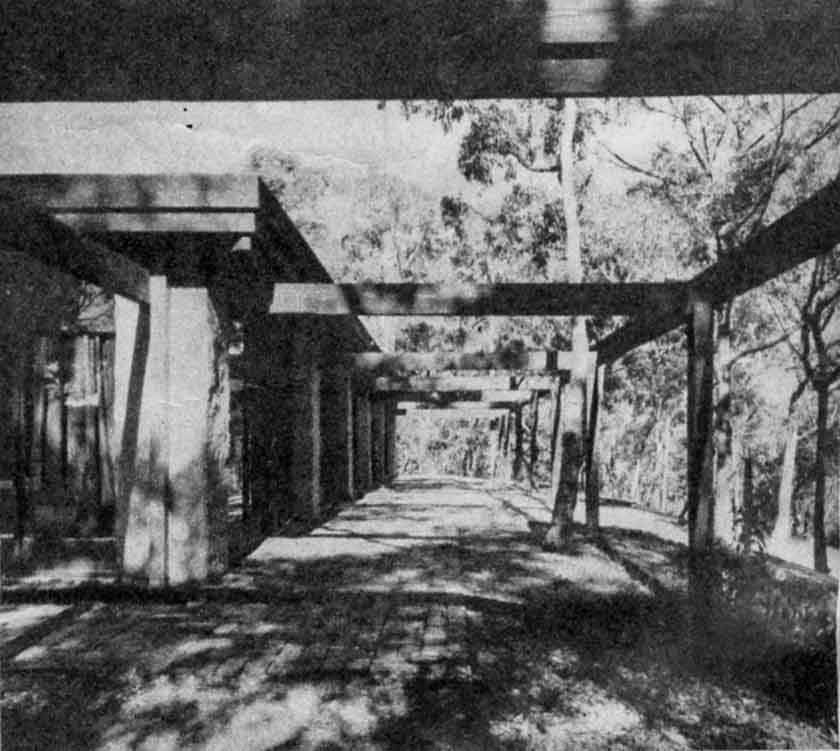 POSTS AND BEAMS of !he pergola that completely surrounds the house serve to tie the structure even more closely to the land This view is along the western facade, which Mr Knox is developing as the "front" approach. From here the land slopes away to a gully.

The man is Alistair Knox. His emergence as a force in Australian architecture comes at a time when many of the country's leading designer, are reaching towards a genuinely Australian character in their houses.

What sets Alistair Knox in the forefront of the movement is the fact that he started so much earlier than the others and - through necessity - gained wide practical experience by building the houses he designed. He has now produced some 400 houses and is the only leading designer to have thoroughly mastered the technique of building with adobe blocks. 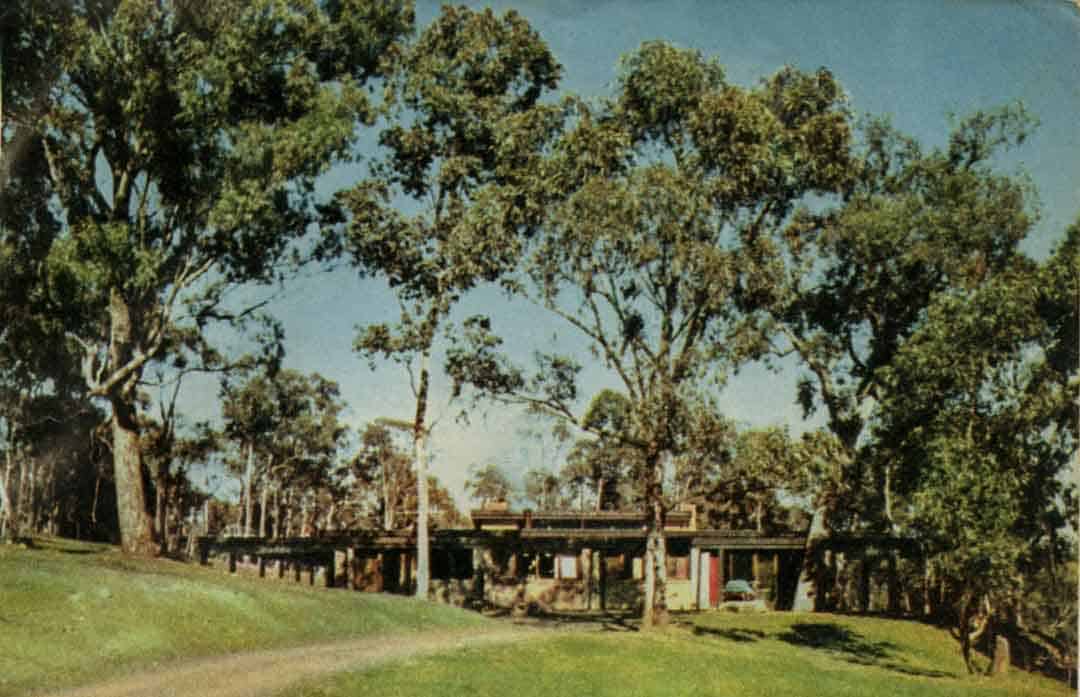 "HOUSE AND LAND ore indivisible ..." This view of the Knox home from the north shows how naturally it merges with its environment, seems to grow out of the soil A wide area had to be excavated, but it was done with a landscape artist's respect for the character of the land Mr Knox preserved as many of the existing gum trees as possible, and repeated their rhythms in his house. Photography: Leslie H Runting

But, above all, he has had the incalculable advantage of living and working in the stimulating, artistic climate of Eltham, rubbing shoulder daily with some of this country's greatest artists, sculptors, potters, writers an( musicians.

He has been able, too to draw upon the services of outstanding landscape artists, such as Ellis Stones, Gordon Ford, and Peter Glass, in producing whole communities of houses that seem to grow naturally from the soil in a still unspoiled bushland setting.

Lately, Mr Knox has formed a construction company with Mr Peter Hellemons, and in this he has been able to devote himself mainly to the role of designer. 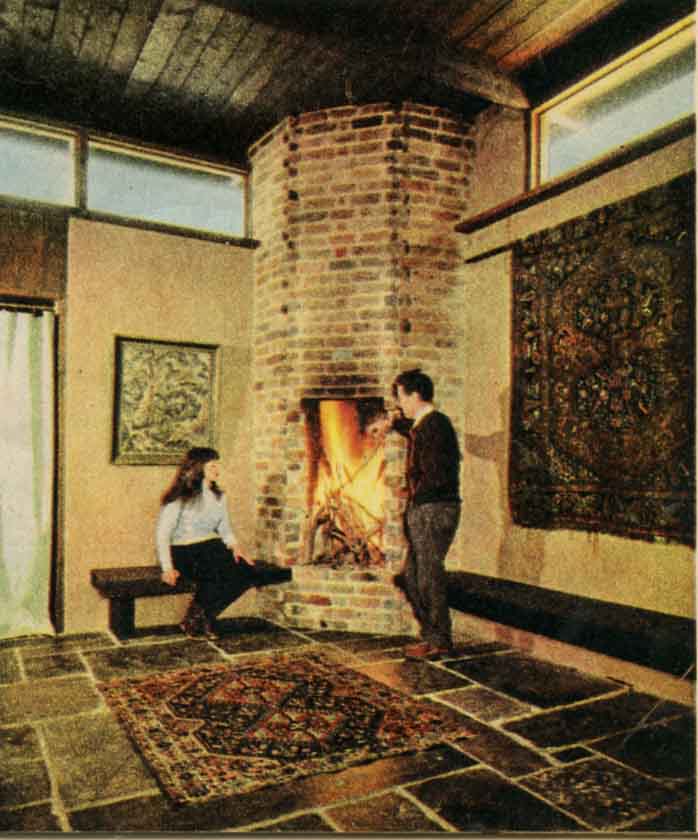 BESIDE THE UNUSUAL vertical fireplace in one corner of the central "courtyard" room are the designer and his wife, Margot. Mr Knox says the fireplace was purely an experiment, but with ample firewood available in the surrounding bushland, he's proved it a "roaring" success. It takes massive 4ft logs.

An uncompromising, highly articulate and somewhat visionary person, Alistair Knox talks with great sincerity and persuasiveness of the type of architecture he believes best expresses the spirit and temperament of Australia and its people.

His basic philosophy is simple: All great architecture is timeless. Australia is a timeless land. What more natural than that the best Australian architecture will be timeless?

If this involves a rejection of many of the accepted modern ideas in architecture, Alistair Knox is unrepentant and unyielding.

Modem "international" architecture, of the type now most commonly seen in Australian cities and suburbs, he regards as "the triumph of technicality over feeling," owing more to engineering than to architectural principles. 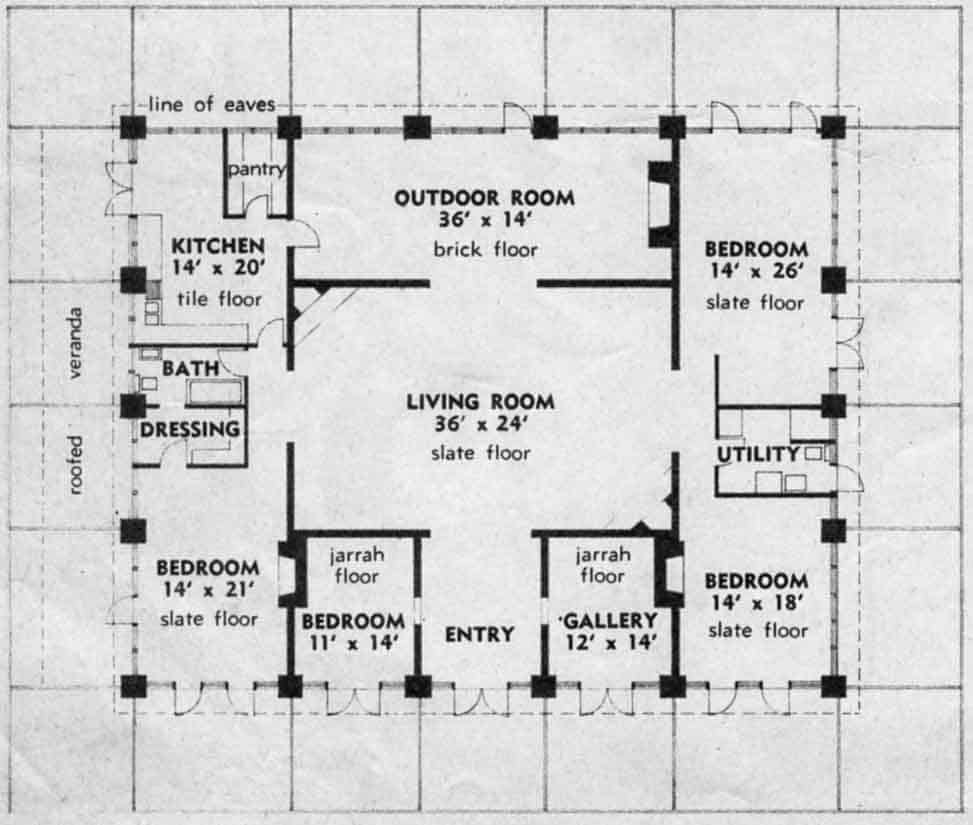 His own house, recently completed in Mt Pleasant Rd., Eltham, is one that appeals to the instinct as much as to the intellect.

The sophisticated suburban house-watcher may seek parallels and inspirations for it in the work of other architects in other lands. But such a quest would be fruitless and invalid.

It is fairer, simpler and more downright satisfying to succumb to the moods that this house induces and to accept it for what it is ... an honest structure, designed for its environment and for the character and way of life of the people who live in it, and built of honest earthy materials, selected and used with meticulous regard for harmony in scale, tone and texture. 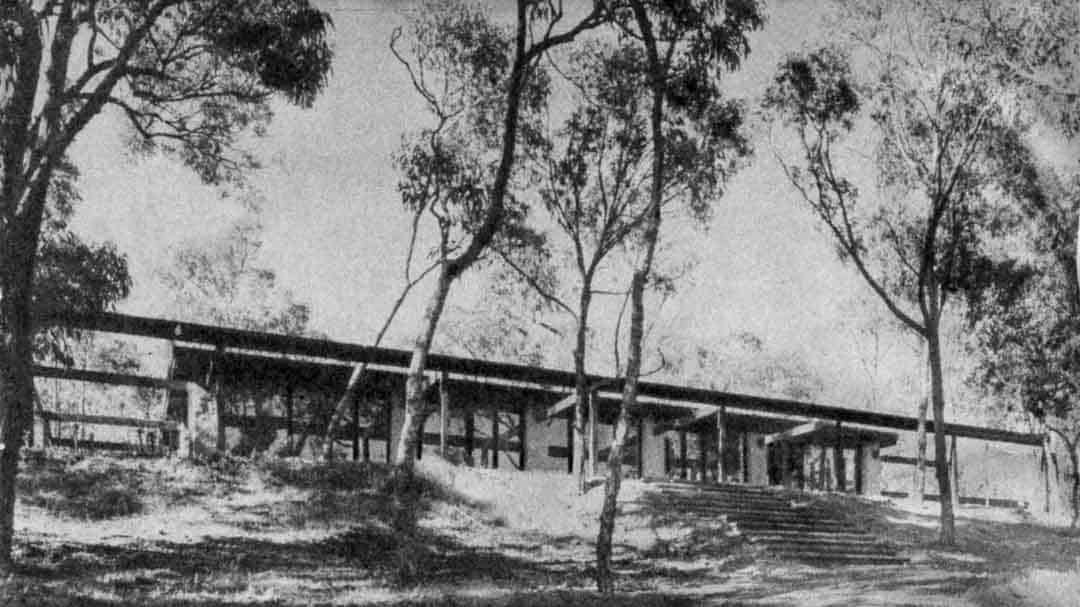 ALISTAIR KNOX's view of Australia as a "horizontal land with vertical rhythms" finds full expression in its treatment of the western facade. As gum leaves turn edge-on to the sun and admit light to the forest floor, so he has sought in his use of solid adobe piers and voids represented by glass to bring a "translucent" quality to the house, with a suggestion of hidden surprises that beckon the visitor 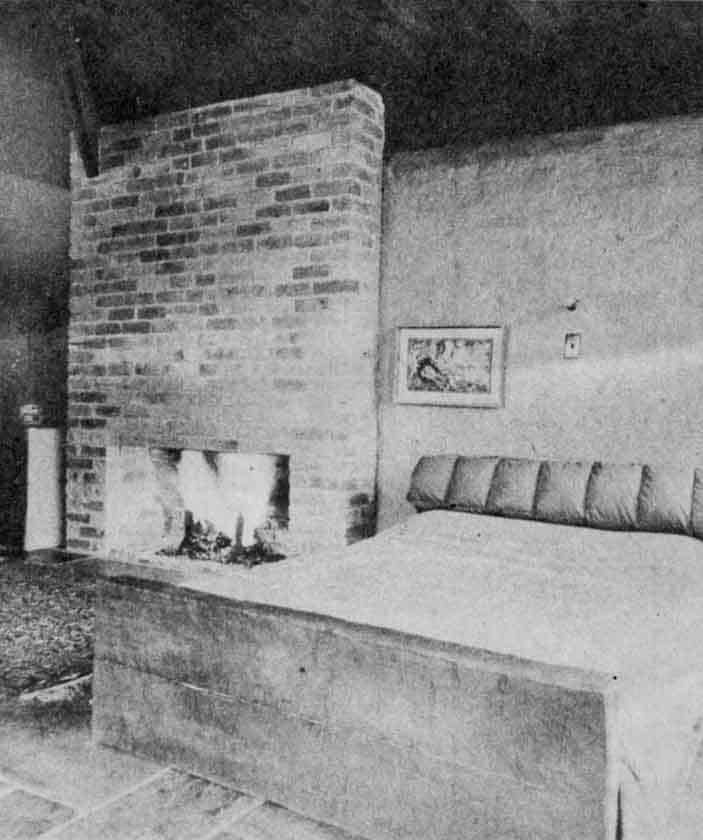 A RUGGED, austere simplicity characterises the Knox master bedroom The walls are a mixture of adobe blocks, old hand-made bricks and off-sown timber panellino The bed ends are adzed from massive 4in thick mountain ash. All rooms ore warmed either by open fires or wood burning combustion stoves - there's no artificial heating in this house

It is probably the most distinctively Australian house yet built in Australia.

It expresses in earth blocks, bricks, slate and timber all that Alistair Knox knows and feels about the land and its people.

The land he sees as "timeless ... survival conscious ... at once immense and fragile ... a contrast of strong sunshine and dark shadow ... bushland that has a mystery, that doesn't occur in any other forest.

The true Australians he sees as "men with leathery laces and faraway eyes ... outward looking ... equally survival-conscious as the land", In them he sees the action of the environment on their lives and characters - and it is the quality of their reaction, he says, that produces the character of the environmental building he now practises.

Externally, the Knox house, with its brick and timber panels and robust adobe piers repeating the strong verticals of the gum trees, conveys the designer's image of the Australian landscape as a "horizontal country with vertical rhythms."

In the rhythmical placing of his piers, Mr Knox deliberately set out to simulate Nature's own bushland patterns. Just as the bush has no finality - there's always the suggestion of new experiences and vistas around every corner - so the piers dissolve the definition of boundary ("the final art in landscape - or house-design") and extend an invitation to enter.

A veranda - in this case represented principally by a pergola of off-sawn timber - stretches right around the house, typifying the Australian's outward-looking nature. The veranda, says Mr Knox, is this country's greatest contribution to architecture, and certainly here it gives a wonderful sense of being and having and belonging to be able to walk right around the house in its shade.

Inside, the house exercises the observer's powers of imagination to the full. 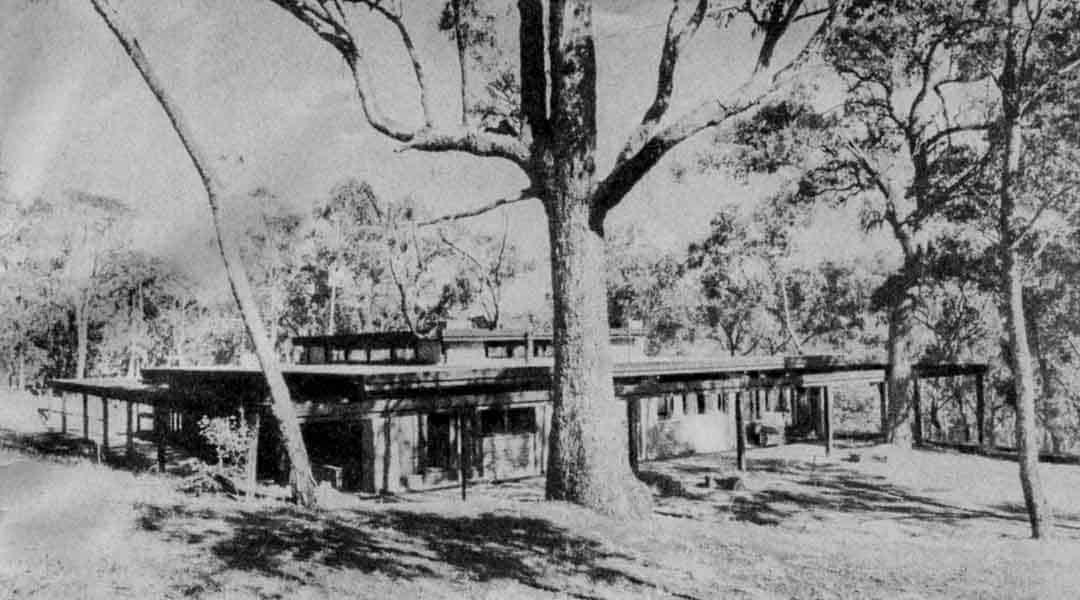 THE SETTING is unmistakably Australian - and the Knox house belongs to it perfectly. It would look out of place in any other country. To the left of the big central gum tree in this picture is the kitchen, and to the right the master bedroom. In shade to the left is the "outdoor room." Facing east, it receives filtered morning sunlight, but no boisterous weather, so the "windows" consist only of flywire screening.

A low-ceilinged, slate-floored entrance lobby, flanked by two small rooms, opens out with startling impact into a classically-proportioned central "courtyard". The immediate effect is of suddenly coming upon a forest clearing, the cool blues, greys and greens of the slate floor merging and harmonising perfectly with the warmer tones of the adobe walls, the bricks of the immense fireplaces and the strong ceiling timbers. 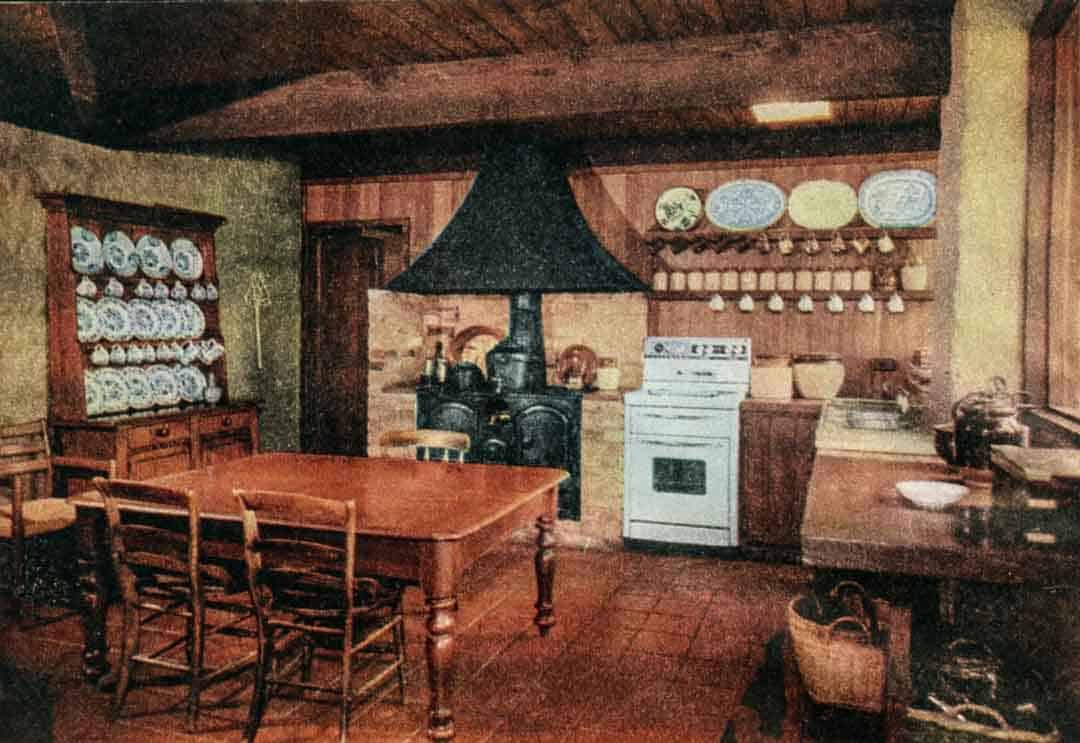 THE TIMELESS CHARACTER of the Knox house is nowhere better exemplified than in the kitchen, also seen on the cover. The only concession to modernity is the white electric stove The one-fire stove alongside burns continuously, worming the room - and baking beautiful home-mode bread A big pantry out of sight to the left makes up for the apparent lock of cupboards. Floor and some bench tops are quarry-tiled

There's a fascinating contrast, too, as of a baronial hall alongside the humble cottage atmosphere of the two small rooms at the entrance.

Again there's the pervasive suggestion of the limitless bush as the rest of the house opens out from this huge (36ft. by 24ft.) room in a series of horizontal and vertical planes that overlap and fold into each other, still with that air of mystery and surprise hiding behind a corner.

Mr Knox believes a house must have a sense of experience and not be merely a technical tour de force; it's essentially for people to live in, not just a status symbol. 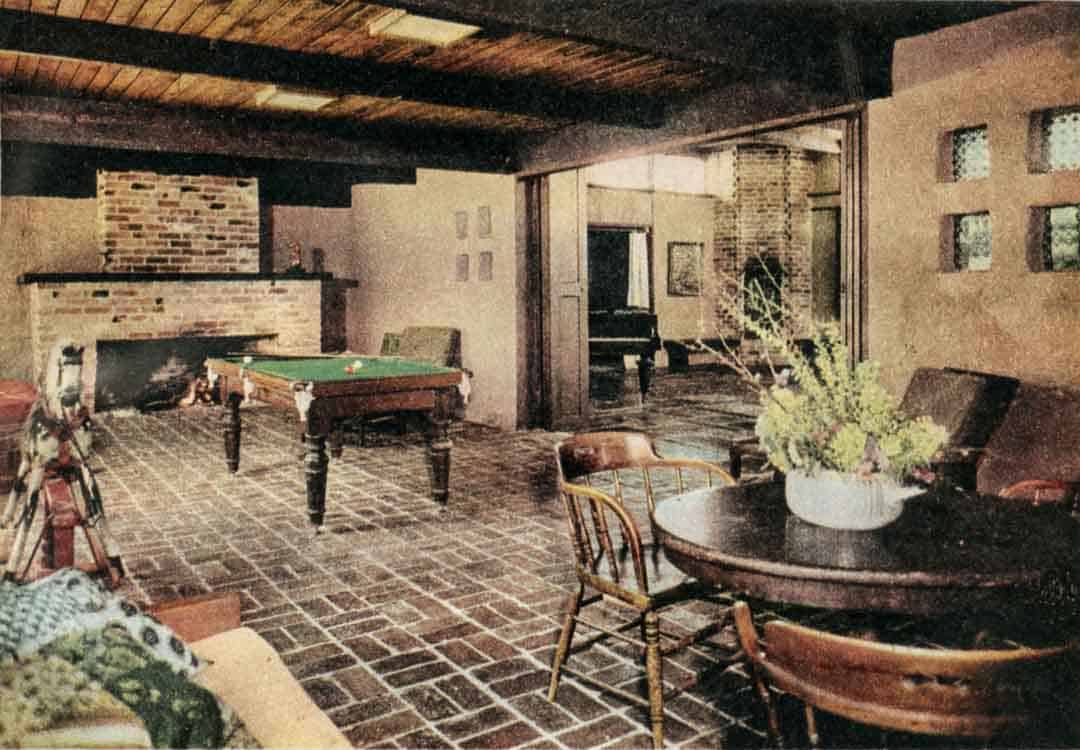 Freed from convention and the need to keep up with the Joneses, then, his own house unapologetically shows different qualities of workmanship, uses voids to show wall thickness, undressed panels to suggest split tree-trunks and adzed tables and benches to express the hewn character of timber.

But probably the most powerful influence underlying the appeal to the emotions that this house makes is its sure sense of proportion.

"Proportion is the essential ingredient of all timeless architecture," Mr Knox says. "Without it, no matter how good the finish, detail and material, a building is merely construction, not architecture."

To those who might say his home appears "unfinished," he would reply:

"Proportion in environmental building is that indefinable balance of masses and voids, which, when correctly related, give a sense of completeness".

And he'll offer a favourite quotation from Goya: "A painting, the effect of which is true, is finished." 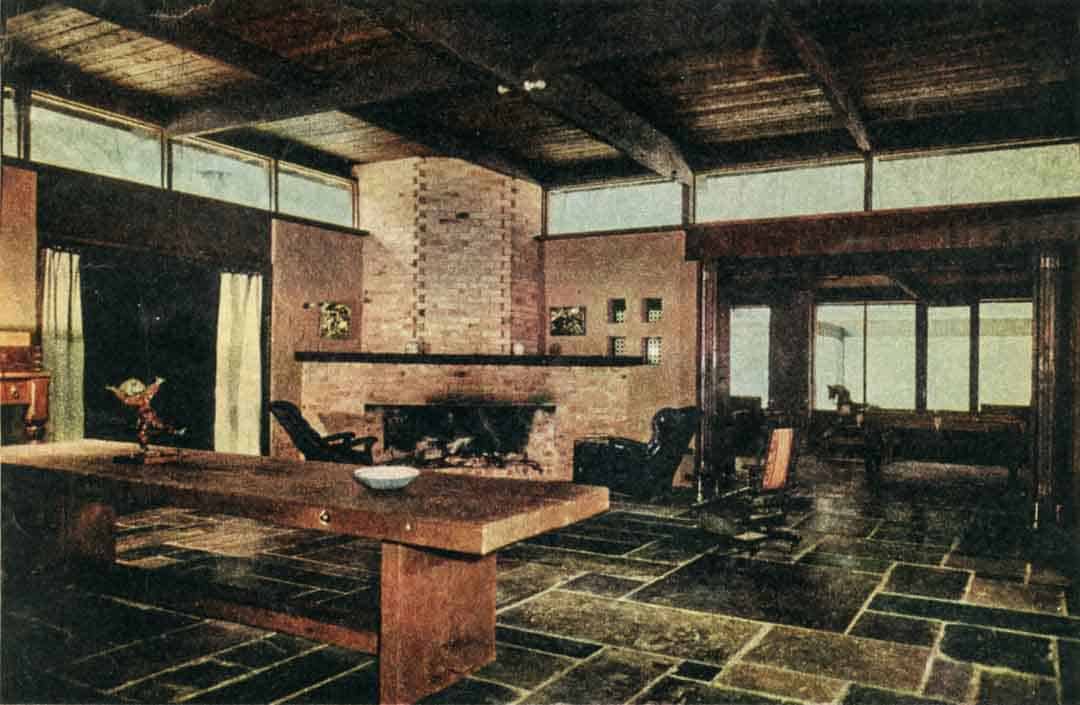 The central courtyard room (below). Earthen walls, rough-timbered ceilings, adzed timber table and benches, slate and prick floors (set directly on to the earth, and drawing a natural warmth from it), all combine to import a "hewn" character to the house. There's little to impede the internal flow of spaces here. Between the two main rooms, a folding door (made of discarded church pew backs) can be flung wide open, and the space leading to the main bedroom and kitchen (left) is covered by a soft leather curtain which gives the visual weight of a door without its "finality."