Out of This World 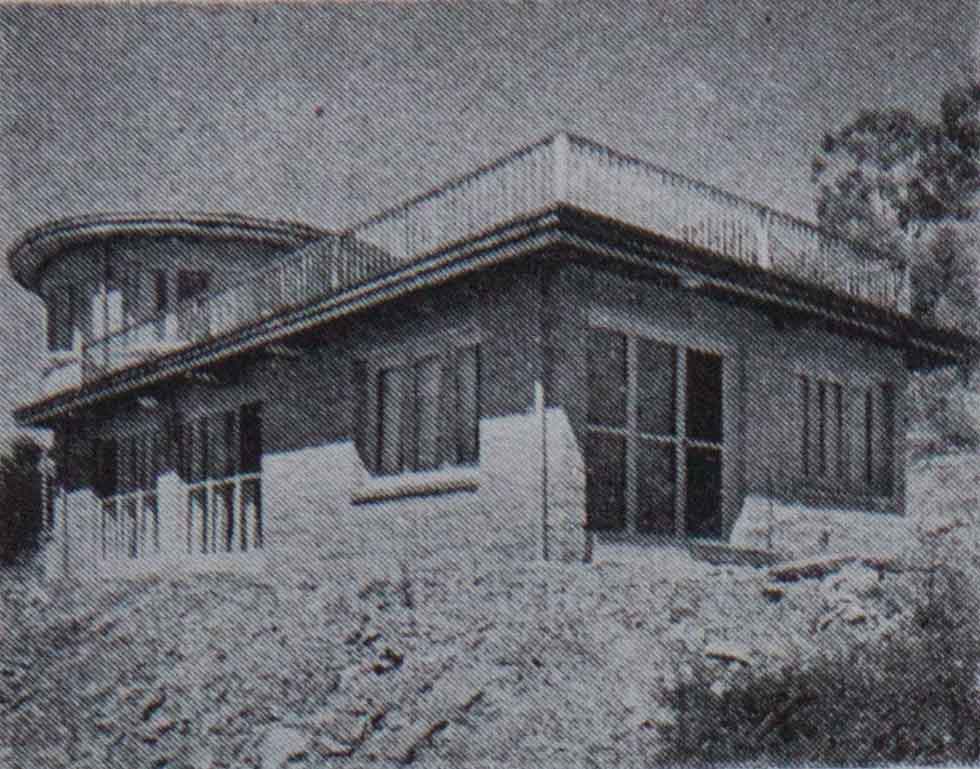 The steep slope suggested a two-level house and the excavations required for the mudbricks became courtyards. It is possible to go on to the lower roof from the ground level.

The McLennans wanted to see the world without being too involved in it-to return to a more natural mode of living and yet remain within striking distance of the city. They were objective and intelligent in their approach to the problem: they built a house in mud brick.

THE Angus McLennan house looks over the quiet, deep valley of Eltham, Victoria, from just below the ridge of the western line of hills.

In spring and autumn mystic lakes partly obscure the town below. On bright mornings the house takes on the pink tint of the sun. At evening primitive shadows of the yellow box scrub tattoo the walls with queer aboriginal drawings.

The house, designed by Alistair Knox, has a sturdy serenity - as strong as the very rocks. 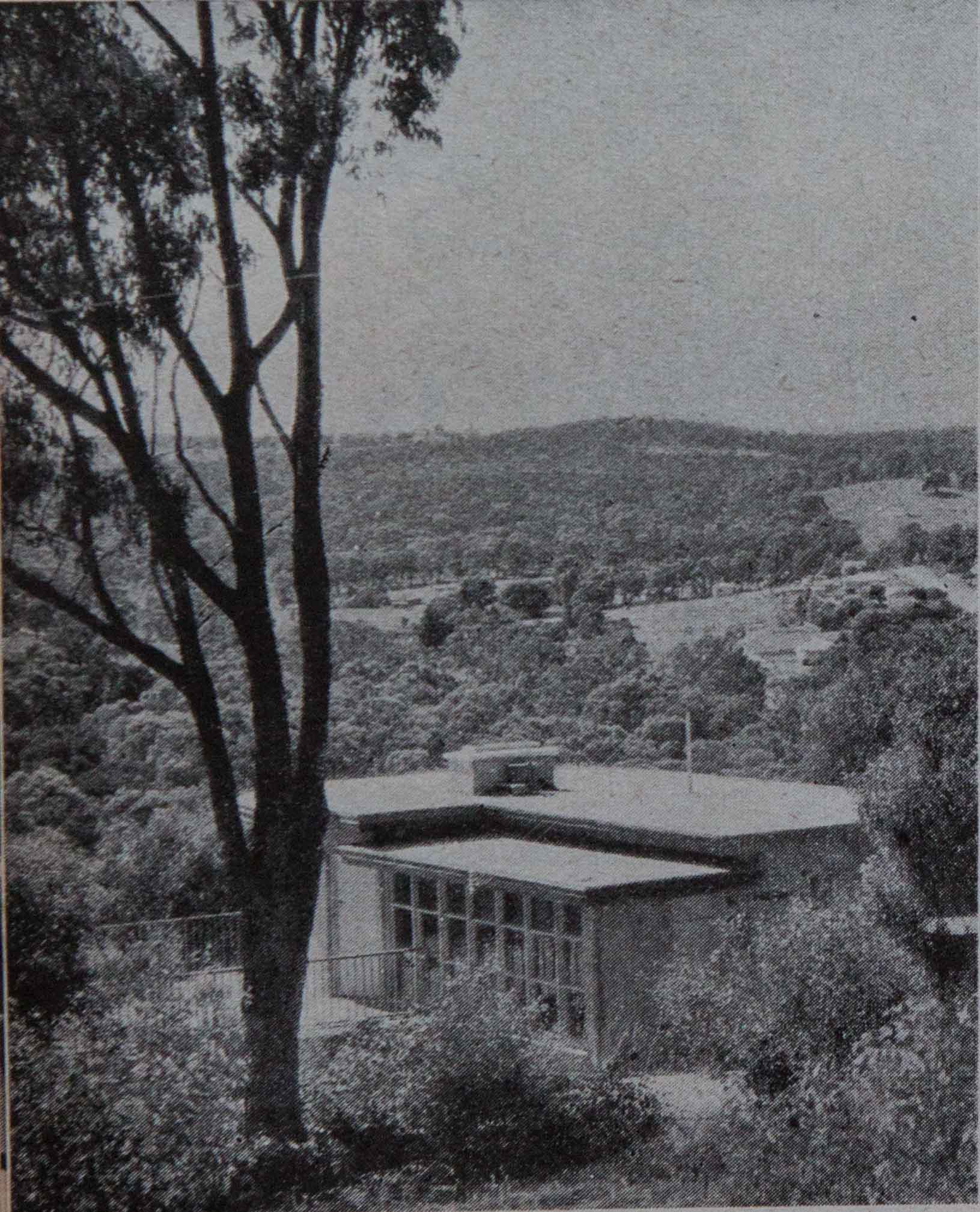 The house is visible from all parts of the town and has rather a fort-like appearance. It looms through the trees that cling to precipitous slopes.

Adobe and reinforced concrete were selected for the construction; the former for its aesthetic and liveable qualities, and the latter because of the complicated system of spans and cantilevers involved. The materials combined naturally into an effortless-looking building of high structural efficiency.

The home has two wings set at right angles one above the other, combining in a circular two-storied section.

The whole of the lower wing is designed for living, with the emphasis on flexibility. A glance at the plan shows how the area has been zoned to provide for both private and general activities without destroying the overall concepts of space and freedom. The fireplace core that runs through the centre of the two-storied section provides an ingle fireplace with a completely open hearth in the living room, a smaller open fireplace in the den, and another in the bedroom overhead.

The ingle is large enough to accommodate eight to ten people. The copper cowl above the hearth harmonises happily with the walls and the brick-paved hearth.

The stone-coped wall on the east side is low enough to be looked over, and the countryside may he seen from the inner warmth. Comfortable seats of polished hardwood, built on either side of the ingle, are big enough to be used as occasional sleeping couches. 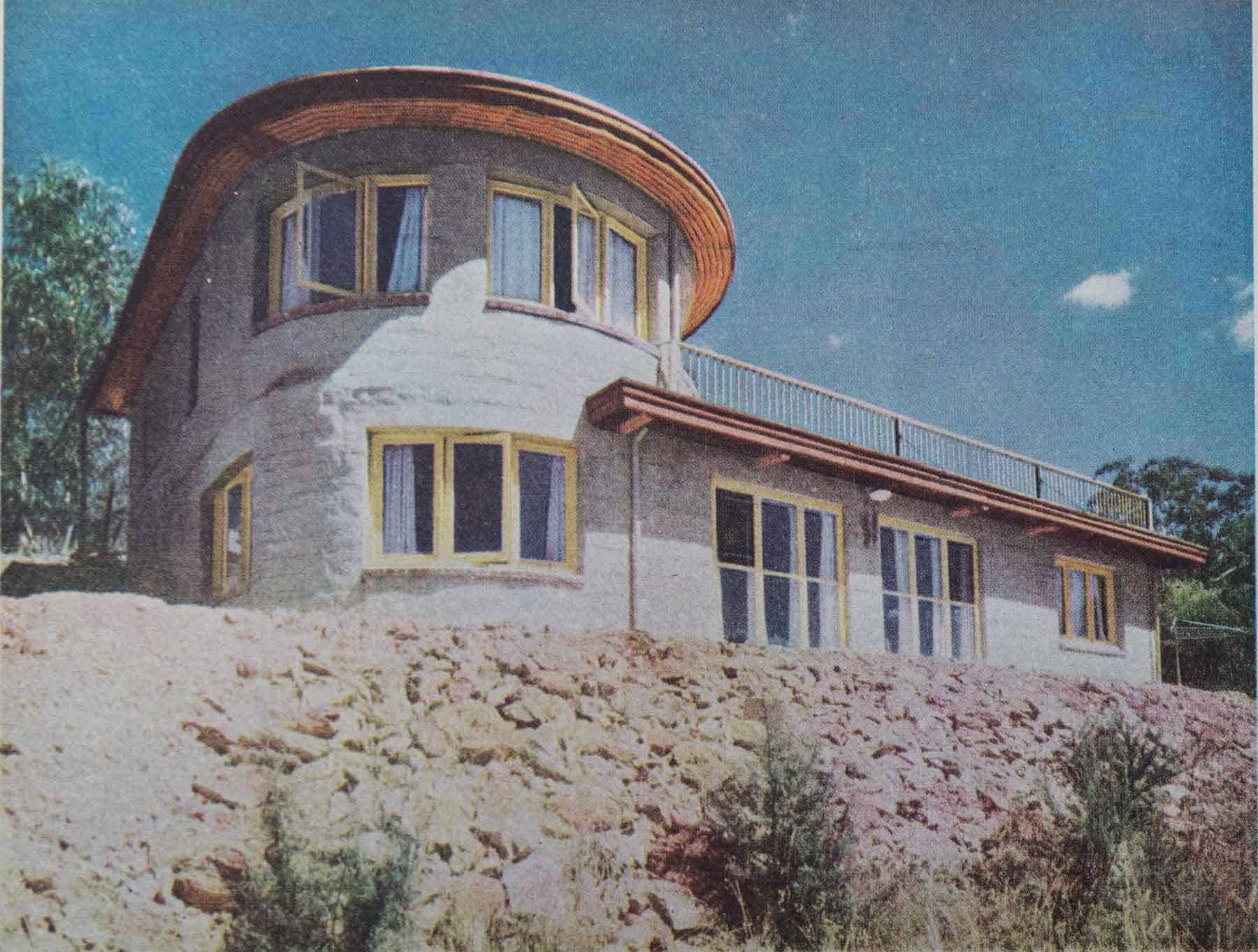 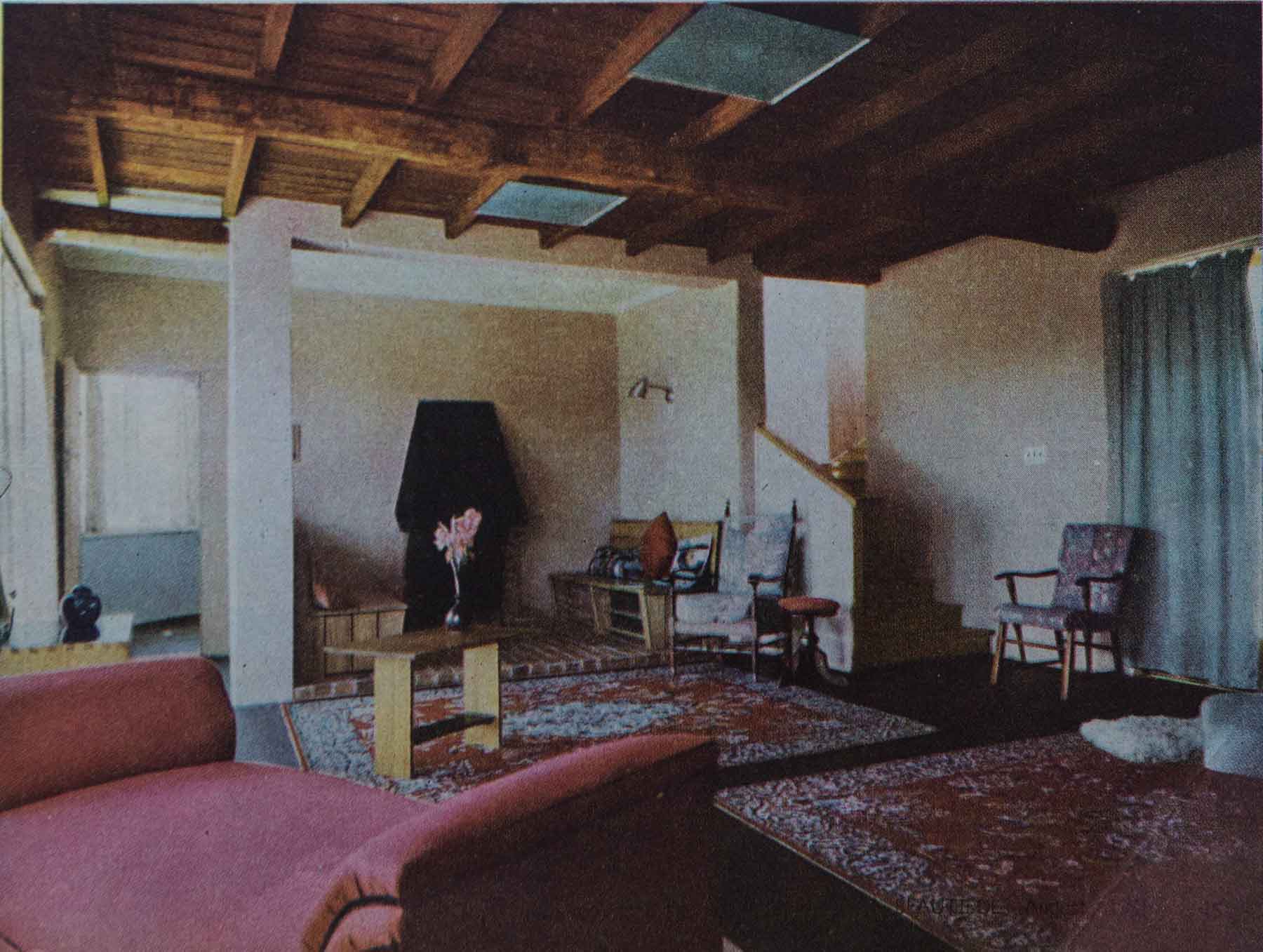 Behind the ingle nook wall and looking south-east is a room that is variously a den, private sitting room or a library. It is a cool retreat on the hottest summer's day and a cosy one on winter's nights. A wall of book shelves at one end, good lighting and a pleasant view of the township complete this private room of the house.

The general living room extends into an eating section at the north end, while the cooking and utility area is tucked away close to, but not visible from, the living room. Adequately provided with cupboards, a washing machine, two sinks, an electric and a fuel stove and an exhaust fan, the kitchen functions in a model manner. The cupboards constructed of maple plywoods have been clear lacquered so that they have lost the usual hospital look in favour of humanness and warmth. 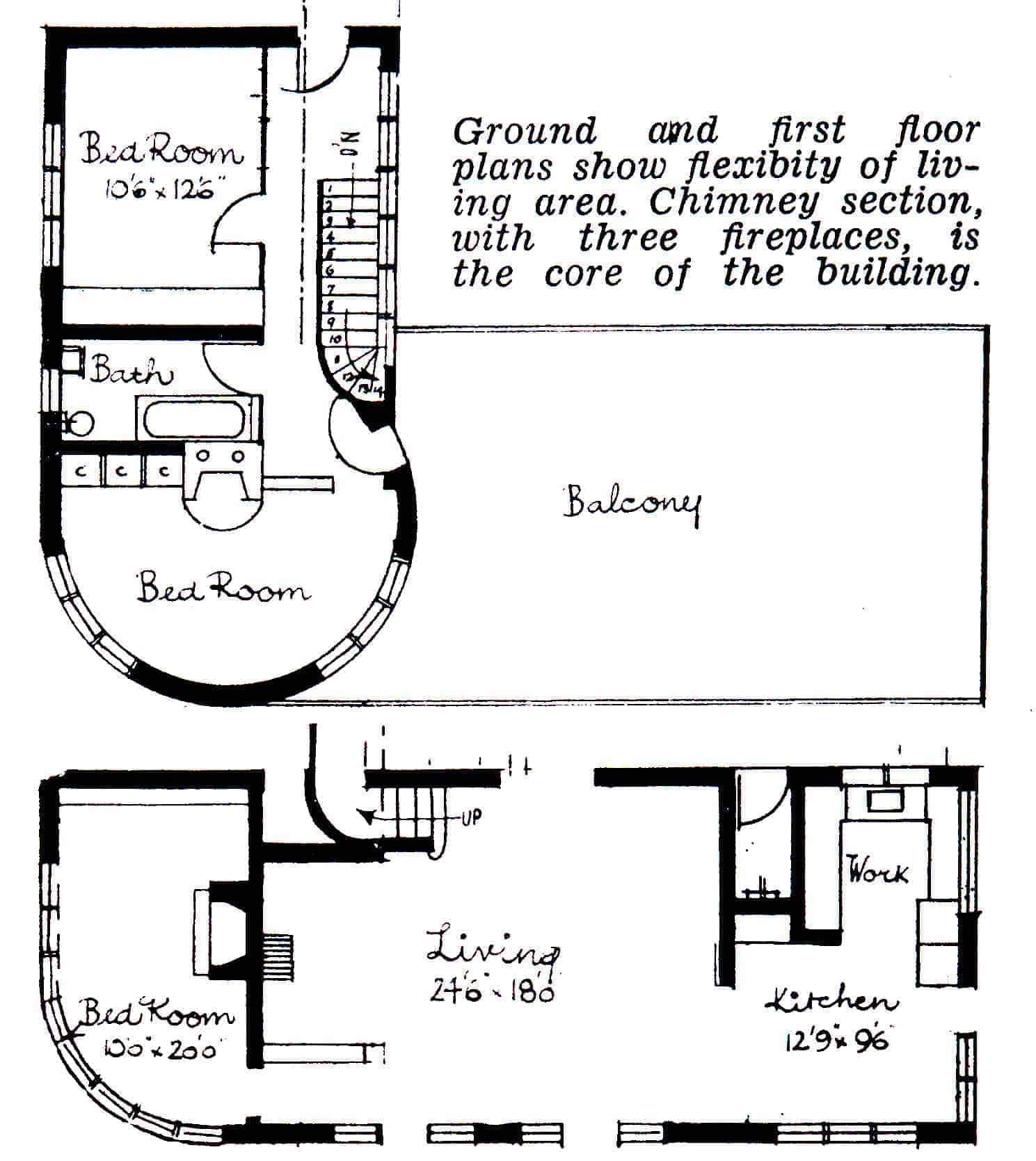 Ceiling beams in the living wing have been left exposed and stained a reddish brown, which combines agreeably with the terracotta-brown magnesite floors.

These tones are tied together by the subtle and varying warm flesh tints of the walls. The patina of an adobe wall is perhaps its most pleasant quality. Here, individual emphasis and expression has been applied to the building and to the varying moods of the rooms in particular, allowing unusual combinations of colour and subsidiary materials.

The upper wing has a master bedroom, a little larger and a semi-circle. The walls are mostly windows that look out over the valley and the distant hills from all angles. The small fireplace permits its use for occasional living in conjunction with the roof terrace. The floors of the bedrooms and gallery are finished in cork tiles and polished hardwood. Adequate cupboards are provided throughout.

The covered space developed by the upper wing spanning the southern end of the courtyard on the west side of the house has been made into a storage area for the innumerable requirements of everyday living.

From the exterior, the window and door openings occur rhythmically, enabling the eye to take in the whole of the building as one object. The repeating levels of the flat roof build up in a logical organised manner, giving the house a sense of unity with its environment. The deep reveals of the mud walls give a feeling of shelter and homeliness, and the use of simple natural materials internally contribute to fluent comfortable family living.