The Look That Says Australia 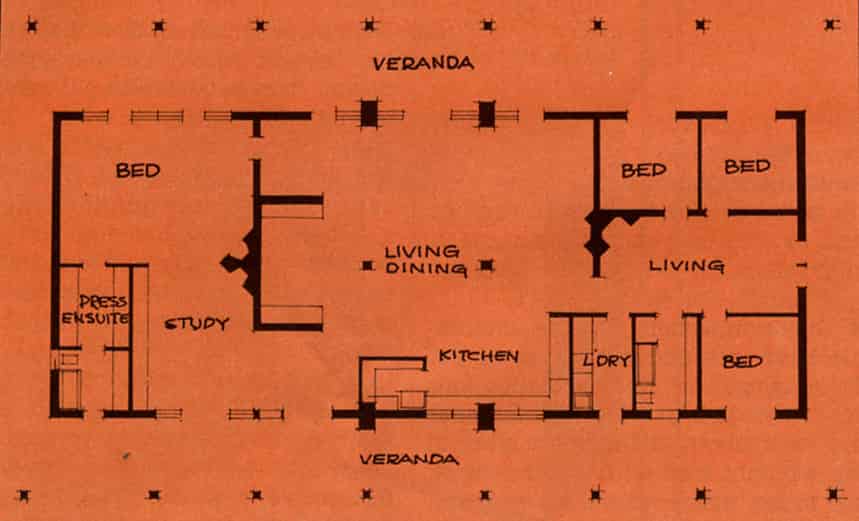 There is something essentially earthy and basic about mud bricks It's a feeling of evolution in the making. Of using nature's own materials - soil and water - taking them into your hands and forming a shelter.

Fairly primitive stuff and not everyone's choice particularly those of us who see ourselves as sophisticated city dwellers, keeping a watchful eye on the coming fashion. 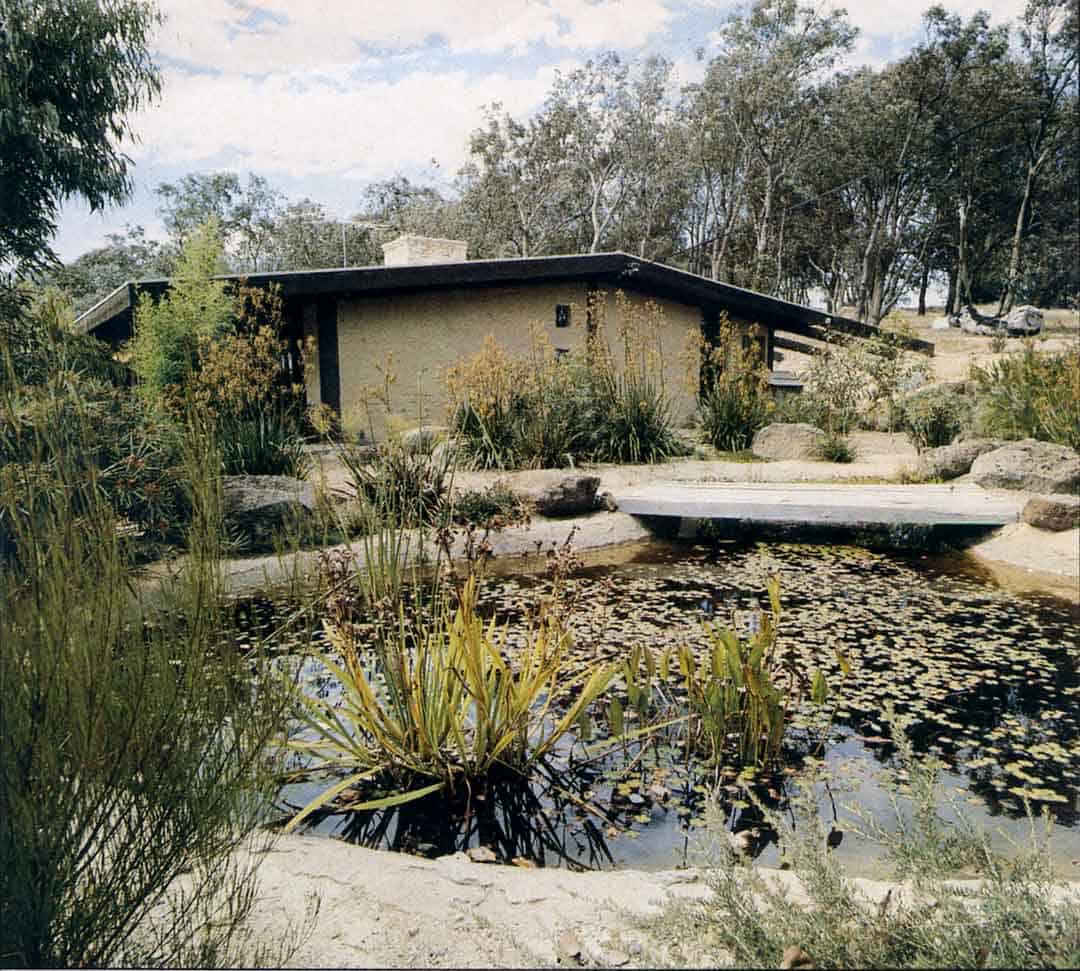 Heavy rafters extend from the roof into the hillside on one side of the house, while on the other windows give a view across the countryside. A garden pool with a wooden bridge lead to the front door. Photo: Gary Chowanetz

But mudbrick is a medium with widespread and growing appeal, for those with modest budgets and for well-to-do alike, a medium that brings with it its own way of life, and here's the story of a house built In that medium that has changed the whole way of life of one young couple. Three years ago Shaun Mccullagh, a successful lawyer, his wife Cynthia and young family lived in a sleek, modern, international-style house that gave splendid views directly across a river 10 the wooded and natural outer-Melbourne suburb of Eltham Life was made easy with all mod-cons and their home was the envy of many of their contemporaries. Then three years ago they did what a lot of us often talk about but never really seriously intend doing and just upped and changed their style. 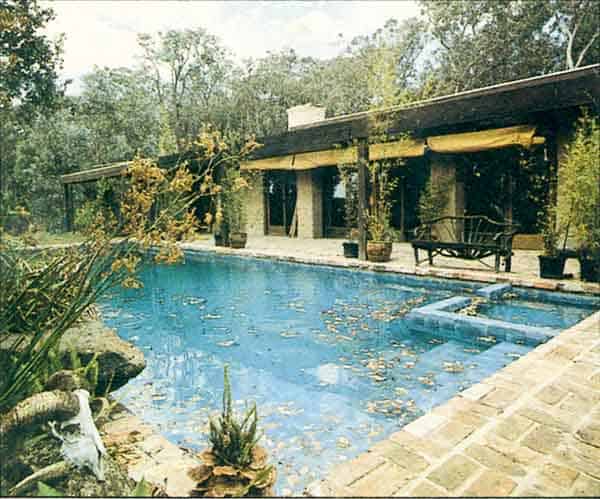 A swimming pool alongside the front of the house catches reflections of the sky. Photo: Gary Chowanetz 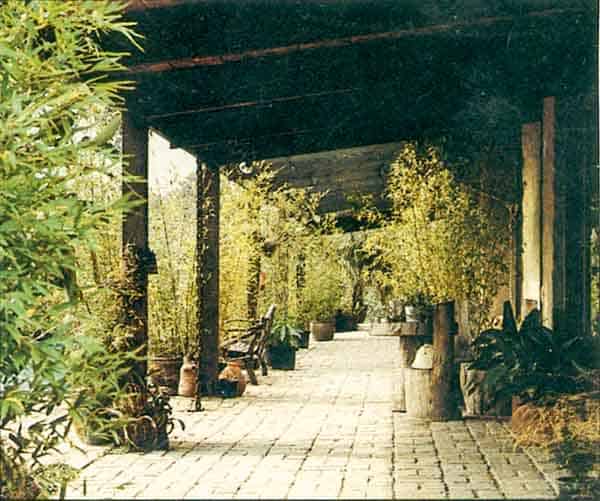 A long, shady veranda runs down the front of the house. The brick paving is an extension of the functional, easy-maintenance flooring inside. Photos: Gary Chowanetz

They bought a large farm in the Kangaroo Ground region, not far from Eltham but an often dry and unyielding country, filled with the strong full-bodied colors of the Australian bush.

And to build a house that would suit this land the McCullaghs turned to the obvious choice of architects - Alistair Knox and Associates, renowned and well respected as the forerunners in mudbrick structures, and in their turn Knox and Associates turned to young local builder Tim Malseed, an expert, in the making of mud brick. 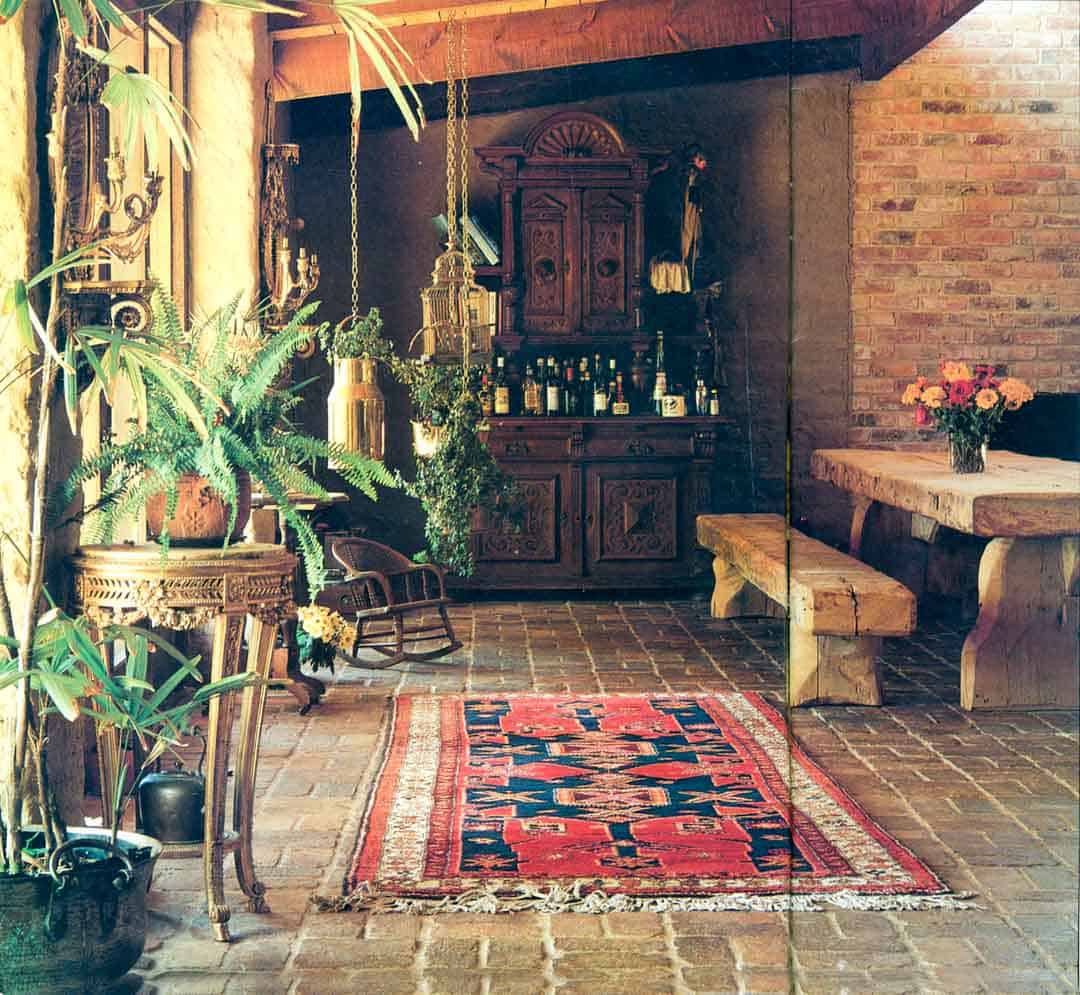 John Pizzey, an architect, with Alistair Knox and Associates, said that their briefing was to create a simple and at the same time spacious and liveable structure. The McCullaghs had selected a site that was on one of the highest points on the property so that the design of the house had to have an involvement with sunlight and sky. 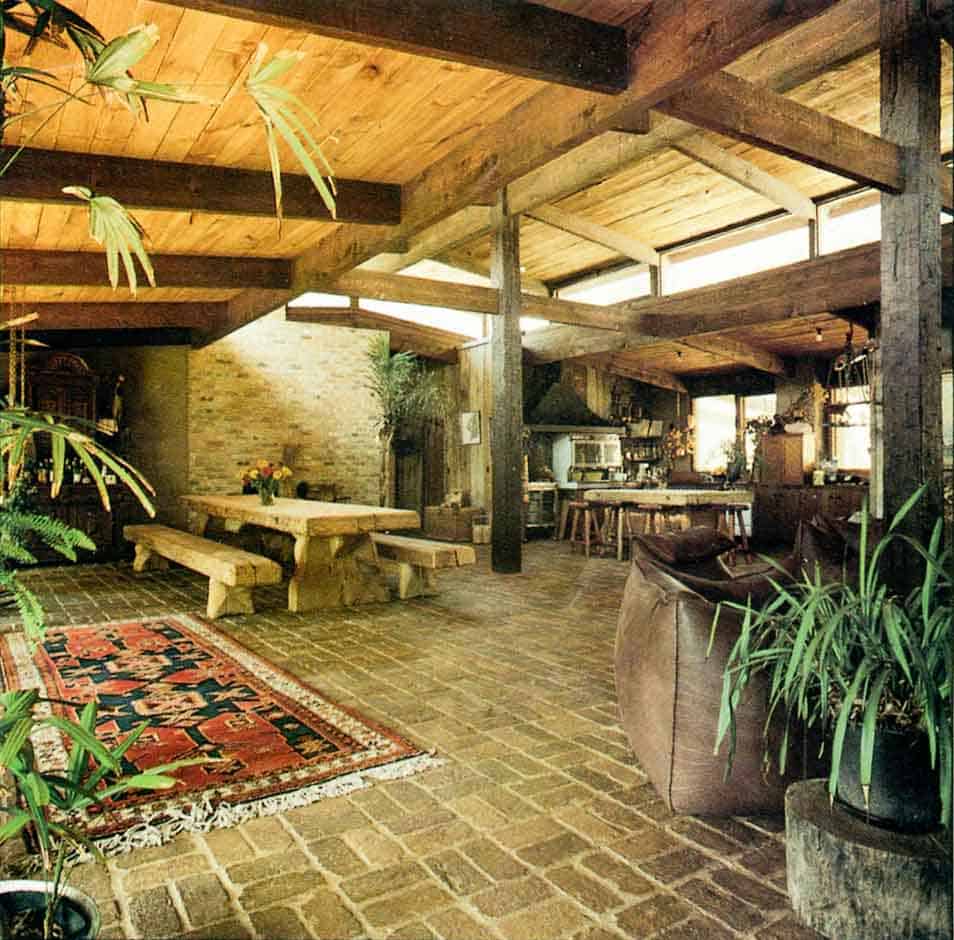 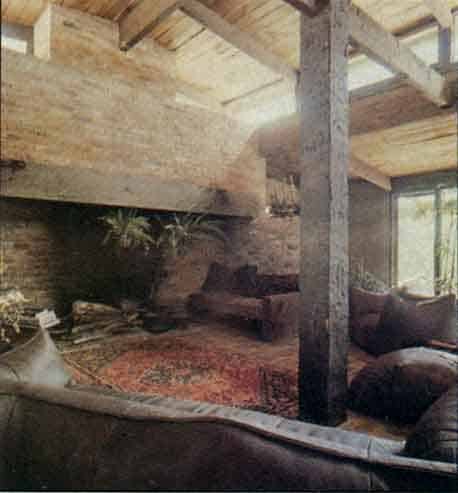 Rugged seats on either side of the enormous fireplace are piled with comfortable cushions - a cosy place for cold winter day conversations. Photo: Gary Chowanetz 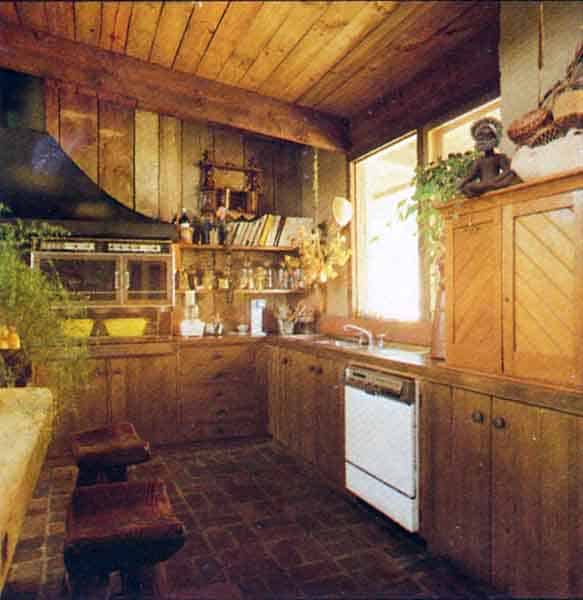 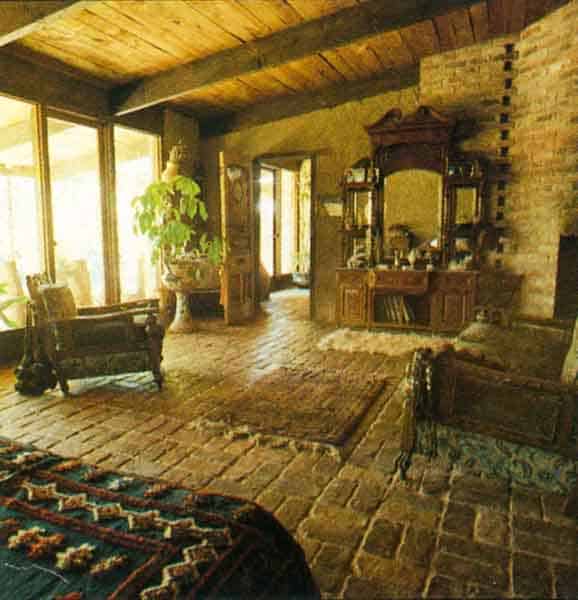 The main bedroom is large and open, with its own fireplace and sitting area. Photo: Gary Chowanetz 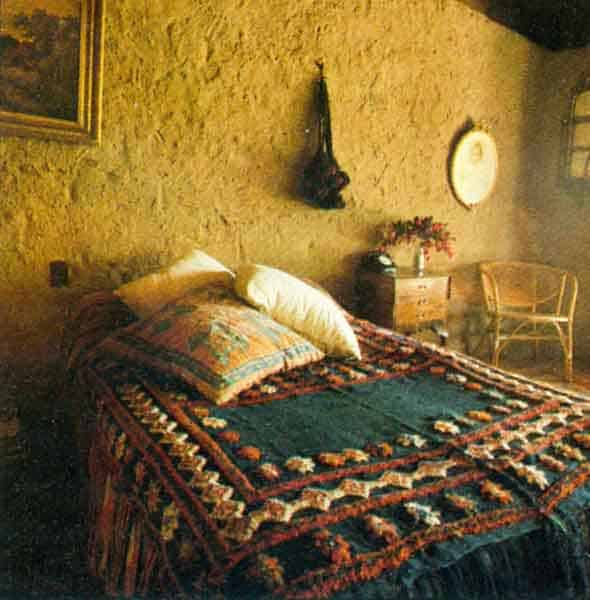 A bright Afghani rug on the bed stands out against the earth-colored walls. Photo: Gary Chowanetz

A whole slice of earth was blasted out of the side of the hill with explosives and into this the house fits as comfortably as though it had always been there.

On one side, a wall of windows gives panoramic views over the countryside and the huge expanse of sky. A swimming pool, virtually outside the front door, reflects even more sunlight and sky.

On the other side of the house, heavy rafters extend from the roof and bury themselves in the rocky hillside as though tying the building down to the earth.

The mudbricks forming the walls were actually· made on the property and trucked up a dusty and precarious track to the building site.

"The McCullaghs were probably the easiest and most tolerant clients I've ever had", says Tim Malseed. "Cynthia always knew exactly what she wanted. There were never any doubts or maybe's in her mind. When we discussed how the second-hand bricks paving the floor should be laid - should they be evenly spaced, should they be neatly level? - she said. 'No, definitely not! I want them so uneven that the chairs almost fall over!"

And throughout the house Cynthias strong Ideas of how its personality should come through has been unfailing.

The huge open fireplace that dominates one end of the long living area has rough seating down either side, piled with cushions covered in rich eastern woven fabrics.

The long dining table and benches were made out of huge slabs of timber, so as to be In keeping with the character of the structure, roughly hewn and bolted together, by Alistair Knox's son MacGregor. The kitchen table Is his work too. Persian carpets are scattered over the expanse of brick tiled floor. Afghani rugs are thrown across the beds to make colorful covers. Beautiful antiques casually carry field flowers and well-loved pieces of porcelain. 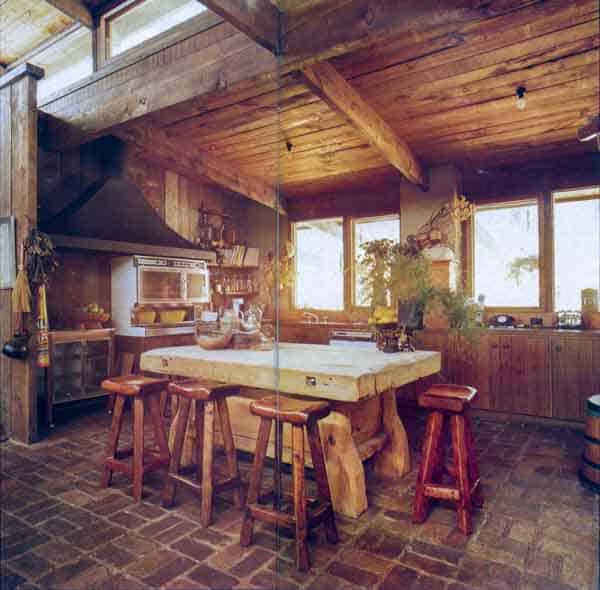 The heavy kitchen table, made by MacGregor Knox, also acts as a functional work bench. Rugged stools provide a place where the family can join in kitchen activities. Photo: Gary Chowanetz

Outdoors, Melbourne landscape designer Gordon Ford - another obvious choice or talents for those who know the broad sweep of his style - has made a beautiful garden of indigenous plants. At the same time he has created windbreaks, roof shade and ground cover. A small garden pool crossed by a wooden bridge makes a refreshing walkway to the house.

The finished result is a home or a truly Australian quality, the like of which can be found nowhere else in the world. It's a quality that the McCullaghs are very proud of .., and that's a pride we can share, whether or not the style is our style. 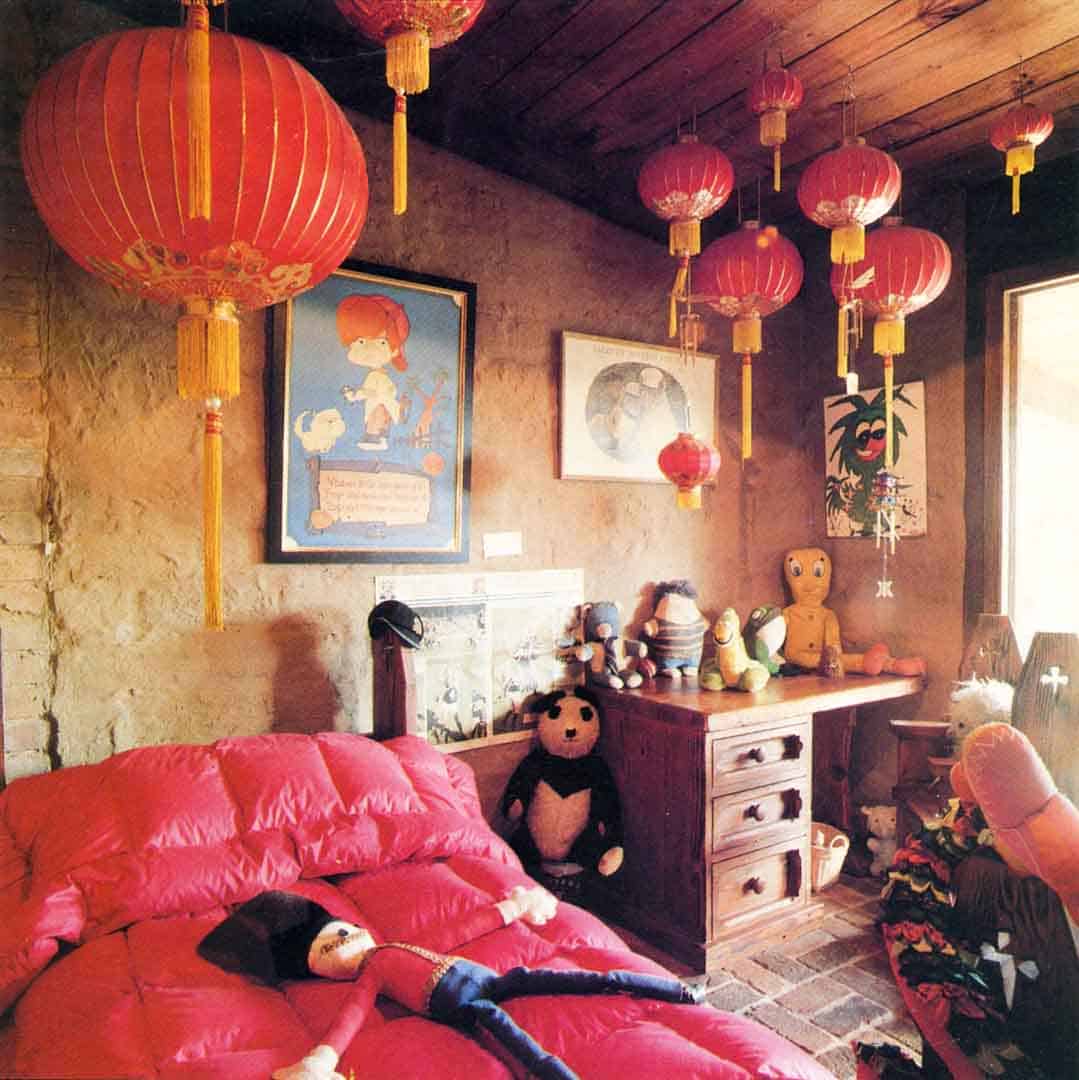 A collection of Chinese lanterns in many sizes bring a little piece of fantasy-land to one of the children's bedrooms. A bright quilt adds lots of color. Photo: Gary Chowanetz