Three young men, Graeme Bell, Roger Bell and Peter Glass, decided to build a mud brick house in Eltham in 1938. They were schoolboy friends who lived in Camberwell. They had developed a common interest in jazz music, which also brought another friend, Gordon Ford, into the fraternity.

Camberwell was always the solid, central core of eastern suburban Melbourne. It may not have then been as affluent as it is today, but it was full of that unequivocal steadiness that was the hallmark of the great middleclass, amorphous mass of the biggest village that has ever come into existence.

Melbourne is reported to have the best system of cross streets of any large city in the world. Its slightly undulating terrain, temperate climate, its easy-to-subdivide-and-build-on-landscape, has made successive generations of developers and real estate agents rich, and the inhabitating population unimaginative and dull.

The late Robin Boyd once wrote: 'When Samuel Jackson, Melbourne's first builder, stepped ashore and slithered up the banks of the Yarra River, he saw a muddy, friendly, woody mildness, with gum trees nodding affa,bly overhead, and white clouds scudding across a bright blue sky' . He continued: 'That was all he saw or ever would see because it was all Melbourne had to offer the architect and the builder'.

The whole of central and eastern Melbourne is a flood plain or a minidelta of the Yarra River. Little streams flow in and out of the whole area. They form pleasant spaces in themselves, but get lost in endlessly repeating, well-curbed bitumened roads, and footpaths that criss-cross precisely at right angles for apparently limitless distances. As you drive through them you know exactly what you will see at every corner. It is almost in total contrast to Sydney, where you are never quite sure what you will find. In polite Melbourne, nothing can get out of place or become unkempt and wild.

In 1938 the immaculately cut nature strips were lovingly trimmed at the edges with spring shears that closely resembled those the old shearers used on their sheep. The only unruly elements in the tamed nature were the large plane, and other exotic trees set at meticulous intervals that had been planted thirty years earlier. Their root systems were cracking the footpaths and the cautious inhabitants thought they would be dangerous. In Autumn their large leaves dropped in heaps and were blown by the March equinoxial gales into untidy piles in the recessed front gateways of the detached houses. It was causing the local councils to agitate for their removal. They were in favour of alternating prunus and flowering peach trees. 'These would be neat and clean and "very pretty" when they flowered in the Springtime.'

It is not by chance that Barry Humphries, the wit and satirical genius, should have spent his boyhood close to the Camberwell junction. All great movements spring from the middle class and if something hadn't come out of Camberwell it would have died of nothingness. It also produced a host of other clear-minded able people like Peter Glass and the Bell brothers. Graeme Bell was a classical pianist who disliked jazz music, but Roger, his younger brother, fell in love with his trumpet. Later, Graeme gradually became involved in the folk music of the Deep South and finally formed the Graeme Bell Band, who have played their own distinctive Dixieland Jazz ever since. Graeme, Roger, Ade Monsbrough and the others who formed the band became a legend in Australia in the late 30s. They are still fixed in the minds of those who remain out of the 6 million people who lived in the country at that time.

My own introduction to them was at the Manchester Unity Tea House, where they could be heard and seen whilst enjoying a pot of tea and thin rolled bread and butter, for a shilling instead of the usual sixpence a time. It was during this emerging period that they used to visit Eltham. Graeme and Peter Glass had started painting ineffective water colours until Peter met Max Meldrum, the great exponent of tonal painting and started going to his classes.

Eltham had for a long time been the Mecca of landscape painters and it took on a new significance for the Bells and Peter when they visited the Artists' Colony. They were amazed to discover that the master and the pupils of the Colony were building walls out of earth that refused to melt in the rain. The first one was for Lily Jorgensen, the master's wife. The next was the Dining Hall with sleeping space above. These buildings have stood the rigours of more than forty years with remarkable stability, particularly as they were built in the French provincial character. There were no big eaves and the gables were cut off sheer at the wall line. There are some marks of the passage of time on them, but none that are urgent or critical.

Justus Jorgensen designed with the eye of a visual painter. The first two buildings are simple in character and subtly different in detail. They stand parallel to each other, but one is set sufficiently forward to enable access from the rear of Lily's building to the terrace in front of the Dining Hall. These buildings were then connected together by a stone archway with a stair alongside which led to a room which in my experience was always occupied by Sue Vanderkelen who was, among other things, a superb cook, recognised for the great Sunday night dinners. Jorgensen's lower studio was strategically placed between these structures so that he could see or hear without being seen. It was medieval in practice as well as design with a ,real Machiavellian flavour. There was a flight of a few steps, rising under the archway to unite the different levels and complete an architectural composition, at the one time mature in spirit and stylish in execution. Jorgensen's continental experience was being re-enacted in the Eltham valley with the unerring intention of forming the whole complex into a French village. 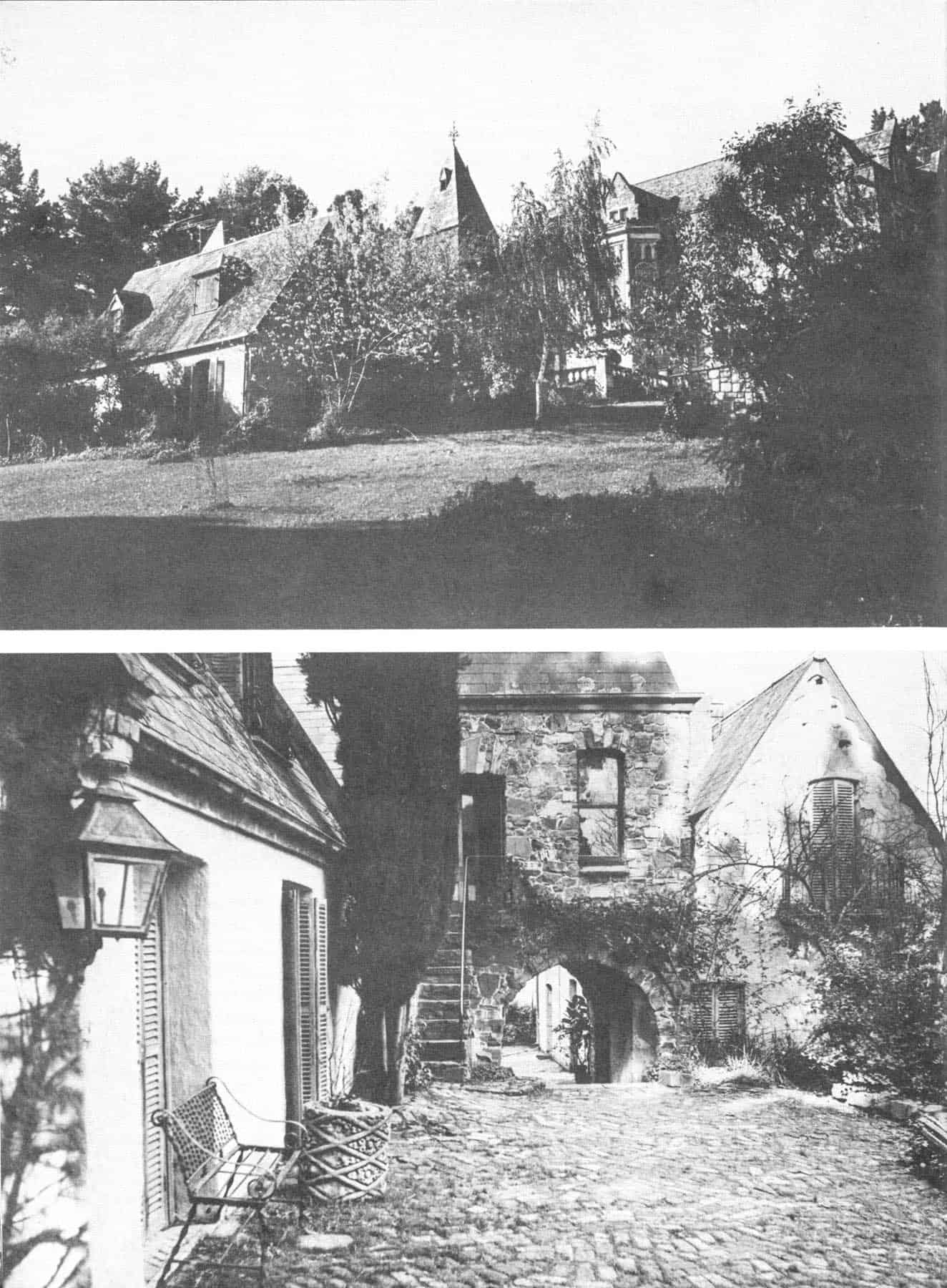 When Peter, Graeme and Roger first saw Montsalvat, their inspiration and ambition knew no bounds. They purchased land nearby from a certain Vivian Volens Cooke, the father of the' Age' art critic of the time. The son, Arthur, lived in Sunny Meade Cottage, which was on the same subdivision. The Glass and Bell land was an area of 6 acres, one allotment of a total subdivision of about 40 acres located close to Josiah Holloway's famous subdivision. Part of the land was bush, part open and part orchard-a typical small Eltham farm that would have just been productive enough to cause the owner to suffer from malnutrition if he tried to live on its produce. One thing it did possess, however, was an abundance of excellent material for mud bricks. It was the most beautiful golden colour and when built into walls using the same material for mortar, it would be left without further render or treatment for years.

The boys made the first mistake in Eltham that many mud brick builders have since made. They failed to realize the cost of the brick making. The structure they proposed had a ground floor plan of 4,000 sq. ft. The Shire Engineer and Secretary, apparently issued the necessary permit to build for the standard five shilling fee without showing any surprise, but the farmer who lived nearby said it was the most meglomaniacal project he had ever heard of.

Until the war broke out, Peter, Graeme and Roger spent most of their weekends in Eltham making mud bricks, laughing uproariously at jokes which almost went by numbers, and drinking beer. It was not done in equal proportions. As time passed the percentage of drinking and laughing increased and the mudbrick making decreased. On one famous weekend, they made only 7 bricks. The amount of inebriation and laughter were not recorded, but they must have been prodigious. They built a shed close to the house site, which was normally for storage, but they shifted into it instead of the tent they had been using at weekends. They called it 'Bald Headed Manor'. It was at this time that Gordon Ford, one of the funniest men who has ever come to Eltham, joined them. He was a particular friend of Roger because both of them had worked with the Public Service. 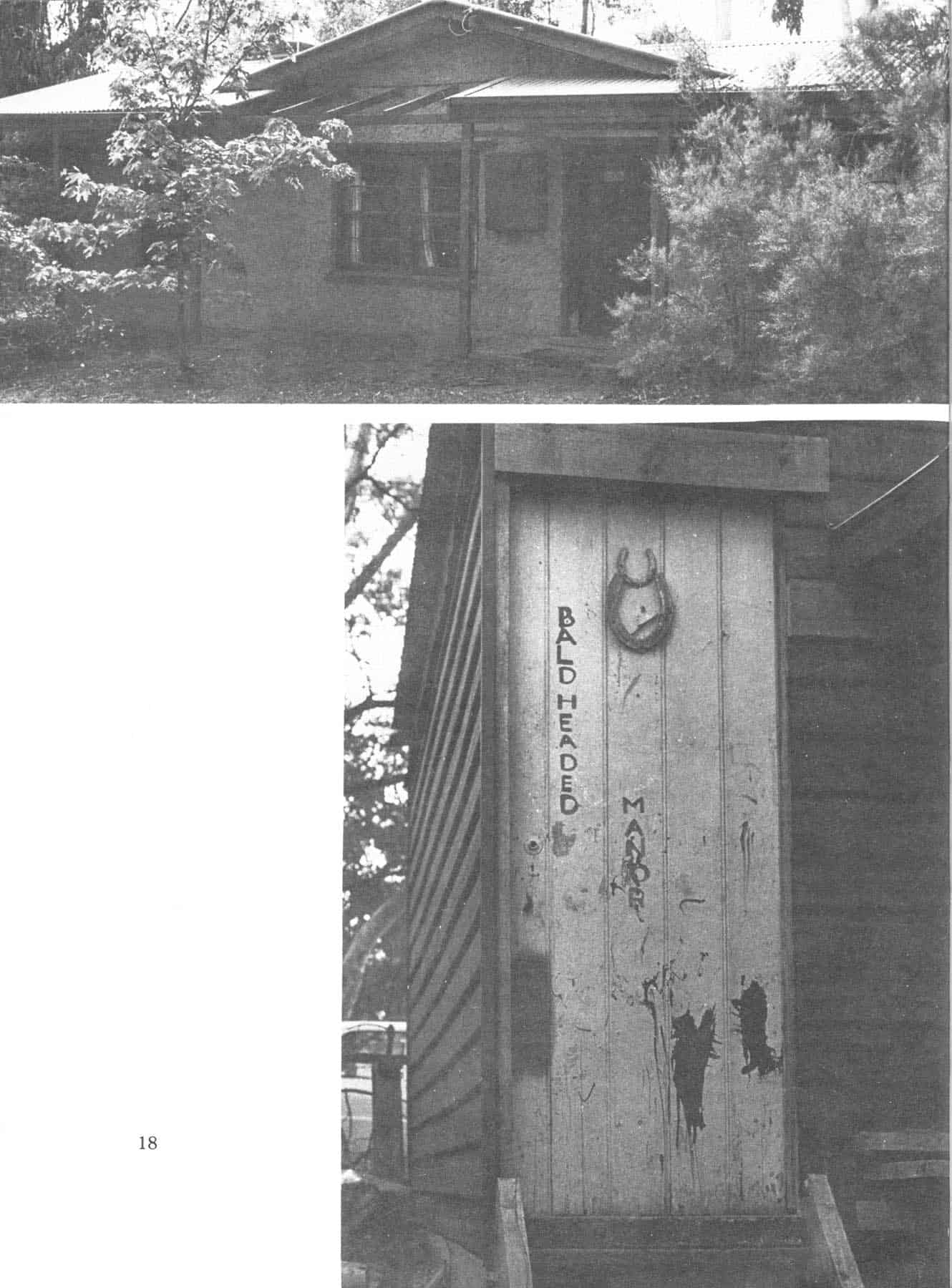 Above top: The Bell/Glass house as it is today. Above bottom: Bald Headed Manor

This foursome, comprising Graeme and Roger Bell, Peter Glass and Gordon Ford created a sardonic style of humour that has survived in Eltham ever since. People like Bill Miller, the Solicitor, Tony Jackson (in those days a dynamic eccentric) and Pauline Ralston - whom Gordon was later to marry-developed a special kind of language derived from a perpetual sending up of the suburban lifestyle. This brand of humour was later brought to perfection in Barry Humphries' Dame Edna Everage and Sandy Stone's characters.

The laughter that shook Bald Headed Manor at the weekends became quieter after War was declared. Peter, Graeme and Roger were all found to be medically unfit for military service and were placed in reserved occupations. Gordon, on the other hand, who was magnificently strong and able, joined the Melbourne University Rifles. Work on the building at Eltham stopped altogether. Graeme spent his time playing for the American Red Cross when the United States joined the War and their troops started pouring into Australia. Later on, Gordon spent some time in New Britain and was then discharged shortly after the Armistice. Near the end of 1945, he purchased an acre of the Bell and Glass land on which he intended to build himself a house.

In 1949, the Bell Band went overseas to become internationally known as a group. They lost their connection with Eltham for a couple of years, while Peter Glass and Gordon Ford became permanent citizens, and each proceeded with their buildings and they have been building ever since. They each now have three separate buildings of grand proportions and most of them are set in the original land they purchased in 1938. Both have become landscape architects and Gordon has built two of his large buildings at the lower end of Laughing Waters Road where it disappears into the bush beside the Yarra River and becomes -'wild' as it winds upstream towards Warrandyte.