Peter Glass (1917-1997) was an artist and a trained draftsman who started working for Alistair as a carpenter and mud brick worker in 1948. As the Knox building empire expanded he progressed to working in the drafting office eventually running the office. A role he filled through the 1960s.

Peter originally came to Eltham with his friends the jazz musicians, Graham and Roger Bell, and Gordon Ford. He eventually built a house opposite Gordon's in John St, Eltham.

In his unpublished autobiography Alistair says: "It was at this time that mud or adobe began to have a slight re-awakening. I built a new studio house for Peter Glass and a third wing to the Downing-LeGallienne structure. Both of these buildings came with ease and yet with spirit. The days of Clifton Pugh and John Howley were gone, it is true. Bricks had to be made by lesser men, but they were still bricks of a sort. Peter's house was a great success, with its two-storeyed studio balcony. The tall earth piers and the verticality of the windows reflected the sugar gums and angophora outside.

"The house was necessitated by Peter's marriage. At this stage, he had been working for me. Margot saw him gazing into the distance one day and guessed what was on his mind: Cecile, the girl he had left behind him in Paris.

"Margot made him send off a letter that day. After a suitable time the answer came back and Eltham was to become the richer by a strong, generous, and individual Frenchwoman. 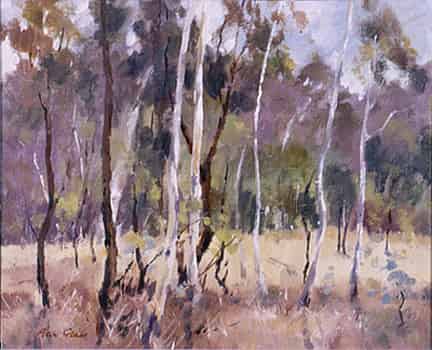 Peter Glass' Butterfly country 1987. From the Collection of the Nillumbik Shire Council

"Cecile thought Australians spent too much money too easily when she first arrived. She was fascinated by the scope and power of the landscape. With true Gallic economy, she set to work to strike growth from the multitudes of seed that fell around her every day. The activity grew, and so did her knowledge. Today, Cecile runs a nature nursery. And not only that. By the time you have bought a dozen plants, she has found out where you live, the size of your land, and its requirements. As she talks she designs the garden, planting for you. It is a tremendous ability, placed where it can be properly used. If half our new arrivals had some of her ability and enthusiasm, we would be much nearer the centre of the country than we are. Her tremendous energy refuses to be slaked, even by this activity. It is interesting to see groups of high-school children appearing at her door in the afternoon to have French lessons. The standard of French in Eltham has risen considerably."

Peter along with Alistair, Gordon Ford and Ellis Stones were deeply involved in the foundation of the Australian Institute of Landscape Architects of which they became members. Peter went on to design many gardens some of which were done in partnership with Alistair and Gordon Ford.