Betty Burstall, the former teacher who nurtured Melbourne's explosion of contemporary theatre in the 1960s and '70s, has died. She was 87.

The founder of Carlton's iconic La Mama Theatre was remembered as indomitable and determined by noted Australian playwright David Williamson.

"In a very real sense I owe my career to her,'' Williamson said. ''She spotted something in my early short plays and gave me every assistance as a writer to develop whatever talent I had. I have such fond memories of her. Every time I pass La Mama and see it still flourishing I see it as a tribute to her."

In the late '60s Burstall returned from a trip to New York inspired by that city's off-Broadway coffee house scene, which she introduced to Melbourne.

Williamson was one of a large cast of writers, actors and directors who found in La Mama an affordable cradle for robustly Australian contemporary theatre.

Jack Hibberd, Kerry Dwyer, John Romeril and Graeme Blundell all passed through the repurposed shirt factory. Their ideas for independent, experimental theatre formed the core of the Australian Performing Group.

Some years ago Burstall told ABC Television: "I wanted it to be a showcase. I wanted them to be able to ? be seen just by being in a play, so that someone coming wanting to cast for a film or play would see these people in action."

Burstall's son Tom said his mother imposed a few key rules. She insisted the actors, directors and writers should split the door takings; and a show would go on only if there were more people in the audience than in the cast. 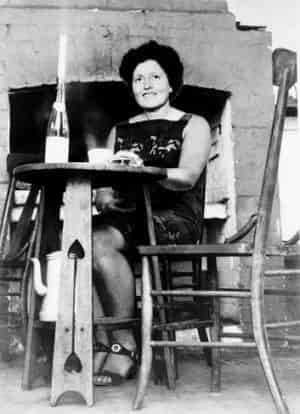 Burstall in the early days of La Mama

"I was not really into theatre but as a 16-year-old I often took the money at the door, so I got sucked into theatre by default," he said.

He recalls visits from the police vice squad to plays deemed to be offensive, and Friday night dinners organised by his mother "to create a salon, but also to pay the rent".

Current artistic director Liz Jones, who took over the theatre's reins in 1976, described Burstall as "a mentor and an inspiration".

Until 15 years ago Burstall had an active role as La Mama's chief script adviser. Jones says Burstall's original vision endures. "We are open to all comers and we read all scripts. There's no rent and they get the box office."