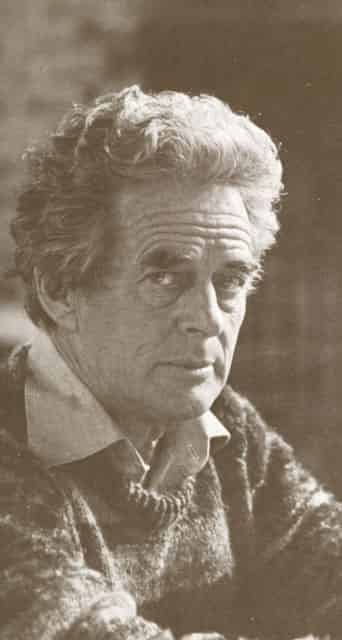 This chapter provides an introduction to the research topic and outlines the aim, objectives, rationale and methodology that were used to investigate Alistair Knox's integrated approach to landscape and architecture.

Alistair Knox (1912-1986) is renowned for the environmental building work he instigated, predominantly in the Eltham region of Victoria, situated approximately 20km northeast of Melbourne. Knox's work, carried out over almost 40 years of practice, was characterized by a consideration for people, place, and cultural values, and was often expressed through use of the natural materials of mudbrick and timber. The Oxford companion to Australian gardens listing for Knox, written by Anne Latreille, describes these 'innovative' buildings that appeared to 'grow from the earth and demanded gardens to suit'1. With his designs, Knox subscribed to a form of organic architecture that aimed to achieve a 'total relationship between the structure and the landscape'2

Knox played a pivotal role within a large community of artists, landscape designers, and alternative thinkers who sought refuge in Eltham from the mediocrity of post WW2 suburban Melbourne. Many of these people collaborated with Knox on projects, including Ellis Stones, Gordon Ford and Peter Glass. Knox was an early advocate for appreciation of the aesthetic value of the Australian environment and was actively involved in numerous environmental debates and protests.

As far as is known the built and written work of Knox have not been analysed to any great extent. His three books, which provide a rich source of primary data, are often quoted in relation to his work. They provide numerous insights into the complexities of Knox, citing influences from Walter Burley Griffin, Frank Lloyd Wright and Capability Brown.

A number of questions arise when considering Knox's work:

The first step in attempting to answer these questions appears to be a close investigation of Knox's writing. Such an analysis would assist in gaining a clearer understanding of Knox's design philosophy, its origins, and the impact his work has had on the development of an Australian design ethos encompassing landscape and architecture. The research aim and objectives were then formulated as a response to these questions.

The aim of this research is to examine the contribution of Alistair Knox (1912-1986) to the development of an integrated approach to built form in the Australian landscape via analysis of his published works.

The objective of this research is to gain a greater understanding of the design philosophy of Alistair Knox through an investigation of the influences and values that informed it. The data obtained will be used to assess the significance of Knox's contribution to the development of an integrated approach to landscape and architecture in an Australian setting.

The following research questions are posed:

WHAT WAS KNOX'S DESIGN PHILOSOPHY?

WHAT WERE THE VALUES THAT UNDERPINNED IT?

Alistair Knox was working in a time and place where there existed a vibrant creative community searching for alternative ways to live and engage with their environment Apart from his many built projects, Knox was an energetic contributor to daily newspapers and popular publications. Only a very small selection of plans and photographs of his work have been published, although the State Library of Victoria does hold an archival collection of Knox material.

Knox's own writings are a complex interweaving of reveries reflecting his historical, environmental, artistic, technical, and democratic values and interests, and they are frequently quoted when reference is made to his work. In them he acknowledges the collaborative nature of many of his projects and praises the contributions of his colleagues and friends. He also states his respect for the work of other designers, such as Frank Lloyd Wright and Walter Burley Griffin. As far as is known, these publications have not previously been analysed to any great extent.

Although recognised in both the fields of Landscape Architecture, as a founding (affiliate) member of the AILA, and Architecture, with the award of an Honorary Doctor of Architecture degree from the University of Melbourne in 1984, material written about Knox predominantly discusses his work from an architectural perspective, focusing on his earth building.3 It is important to reposition Knox as a designer who made considerable impact on the profession of landscape architecture.

This research method has involved an analysis of the content of the three books written by Alistair Knox, as indicated below: 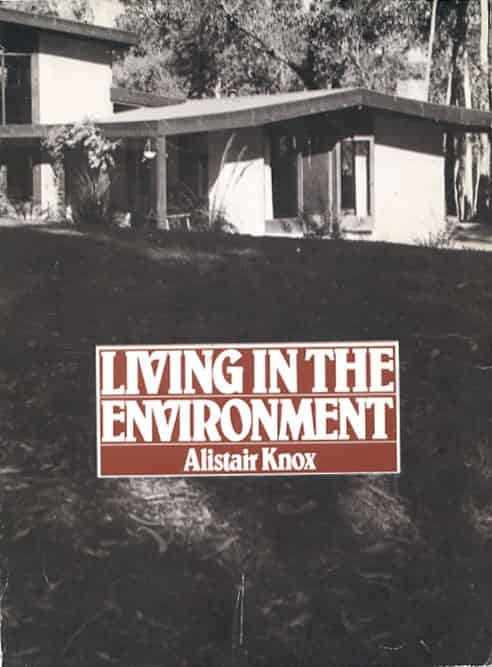 Knox outlined the history of environmental building in the Eltham area, described the projects he worked on, the people he came into contact with and his building and life philosophies. In this book Knox claimed that he drew his inspiration from "the two greatest architects Australia has known - Frances Greenway and Walter Burley Grittin." 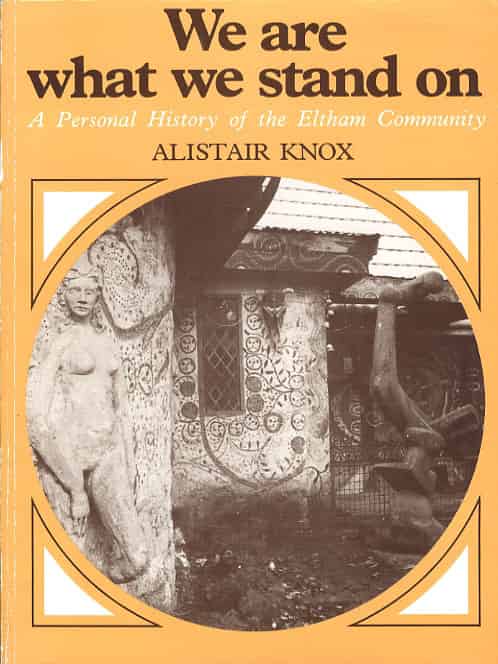 KNOX, Alistair. We are what we stand on: a personal history of the Eltham community. Eltham: Adobe Press, 1980.

An insight into the people who lived in Eltham during Knox's time and the communal spirit in which they lived. this book focuses on the period 1945-1960 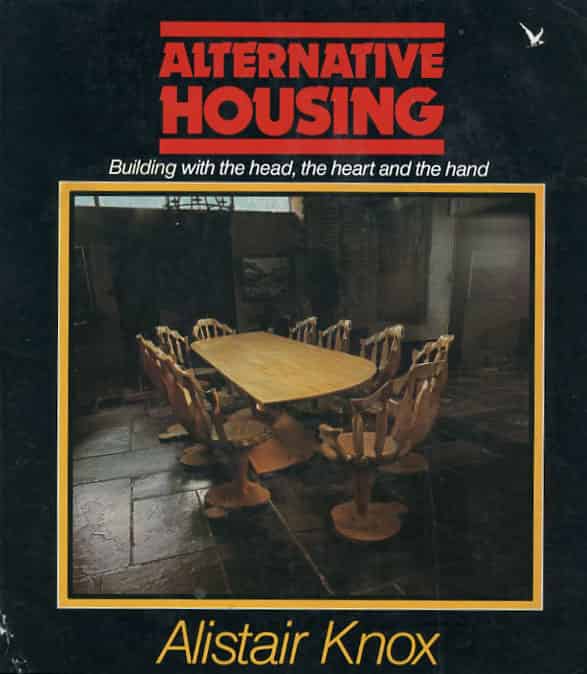 KNOX. Alistair. Alternative Housing: building with the head, the heart and the hand. Sutherland: Albatross, 1980.

In this book Knox advocated a community approach to lifestyle and building. He covers similar territory to the previous book, but on a more personal reflective note and gives details of a selected number of projects, including those outside the Eltham area.

The labyrinthine quality of these books, rich with information of various aspects of his personal and professional life, including friends, colleagues and clients; inspirations; philosophies; landscape reveries; technical and project related facts and environmental rages. The blurred boundaries of Knox's life in Eltham are reflected in the free-flowing style of his writing, presenting a wandering through time where some events are specifically pinpointed, whilst others are left vague. This interconnected weaving of information is an intriguing reflection of the qualities inherent in Knox's work, where landscape and architectural boundaries merge. Did the strength of his achievements come from this interconnectedness?

In order to gain an understanding of the philosophical basis and influences that underpinned these many facets of Knox, the books were gradually unpacked and rearranged through an instinctive method of content analysis.

An initial reading of the books was carried out, from which a number of Knox personalities emerged: the modernist, rebel, mentor, designer, romantic, environmentalist, community leader, practitioner and activist.

Knox's books were then further unpacked and the contents rearranged via a series of spreadsheets designed to elicit 'patterns of meaning' and 'associations'4 within the text which would lead to an understanding of the following areas of interest:

It was anticipated that from the data gained, an assessment could be made as to the contribution of Alistair Knox to the development of an organic form of built expression in an Australian setting, which equally considered landscape and architecture, and the implications of this on the field of landscape architecture, of which Knox was an affiliated member. Samples of the spreadsheets are provided in chapter 3, with the complete spreadsheets included as Appendices 1 - 5.

The following Chapter provides background information in relation to understanding the influences, values and philosophy of Knox, with specific reference to

The concept of organic architecture in relation to Frank Lloyd Wright and Walter Burley Griffin was considered to elicit the key values and philosophies and how these were expressed in their built work, to enable a comparison with Knox.

The post World War 2 social climate in Melbourne, encompassing a growing appreciation of Australian landscape values and environmental awareness was investigated to provide an understanding of the cultural changes occurring during the time Knox was active in Eltham

The nature of Eltham's artist community and tradition of earth construction were considered as a precedent for alternative approaches to living in the Eltham region.

1 Latreille, Oxford companion to Australian gardens, p348.
2 Knox, Living in the environment, p60
3 The works of FORD and LATREILLE, however, are written from a landscape perspective.
4 Ray Green , Content Analysis . Class notes for Research Methods 1 A, Faculty of Architecture Building and Planning, University of Melbourne, 2005