One day I received a phone call on behalf of a lady who had lived all her married life in a farming settlement in the middle of Victoria. At that time, the architect Robin Boyd used to write for the daily papers articles on mud brick building from the material he received from me. It was this that stimulated the enquiry as to whether a new homestead could be built on her sixteen hundred acre farm at Murphys Creek, located halfway between Tarnagulla and Moliagul and a few miles east of Dunolly.

These towns were the basis of the greatest alluvial goldfields of Victoria. 'The Welcome Stranger Nugget' unearthed at Moliagul a few inches below the surface, is the largest piece of gold ever found in one piece. Even after it had had bits broken off before it got to the bank, it still weighed more than 2200 ounces of pure gold. The gold had long since gone and the district became one on which the 20th century never truly dawned.

The slightly undulating landscape gave unmistakable signs of its immense geological antiquity, and Mount Moliagul rose about a thousand feet above the surrounding plain in solitary grandeur. Its silhouette was like a sleeping lion carved in granite. 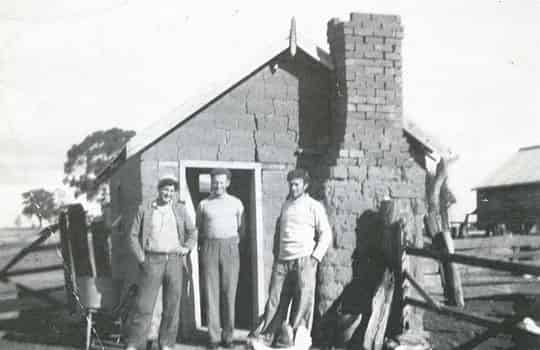 I laid the scheme before the mud brick making group. Three volunteers resulted and they set off for Tarnagulla and Murphys Creek armed with picks and shovels and the determination to make a lot of money quickly and to buck the system at the same time. Arrangements were made to dig the required soil by hand in a pond near the disused pig pens. This hole was about a foot deep and the soil was to be broken back into water that was placed in it at that level, similar to the way it had been done in Eltham in the time of the water shortages. I returned to Melbourne feeling that here was a start of a great adventure in post war building. It didn't quite turn out that way. I still worked in a bank in the city, waiting for the position to ease so that I could go into design and construction full time. Two of the men concerned have since become well known environmentalists - Neil Douglas, the artist, and Gordon Ford, the landscape architect.

The first attempt at making mud bricks at Murphys Creek was a calamity, but it was one of the links which later forged their characters and. approach to the total landscape. Two weeks after starting, a telegram arrived from them which stated, 'Bricks already made, now so badly cracked, have ceased work, await your arrival Saturday'. As I read the telegram, the farm scene with the scattered out-buildings and the pig pond etched itself on my mind with a melancholy foreboding.

When I stepped from the car with the owner's daughter, the next weekend, the sight of all those cracked and disintegrating bricks passing before my eyes was like a dark cloud moving across the sunny afternoon. Gordon Ford referred to it at a later time as the 'boulevarde of broken dreams'.

The brick makers would be paid some money. The owners became more determined than ever to proceed, and a certain Archer Hancock, who had actually built in mud bricks many years before, was to supervise the making of them. They had gone wrong in not sticking close to the surface as planned. They felt they were getting good sandy content arid clay soil as they went deep down into the ground, and formed a series of caves and brought the material up from the bowels of the earth. They gave names to each of these holes such as 'Tea Leaves' and 'Pigs' to keep themselves amused while they went through the prodigious efforts of wheeling barrow load after barrow load of material onto the natural ground level to form into bricks.

It turned out that the material was rotten granite and felspar that broke up on exposure to the air, no matter what you did. This was sad enough, but when I examined the pick that Cyril Jacka, the third member of the trio had used, I found he had ground some inches off its length by the sheer effort of driving it into the ground an almost infinite number of times during those two weeks.