Dome Constructions Pty Ltd Subdivided the Hillcrest Estate out of the lemon orchards that run between Park Road and Deep Creek in Mitcham, now Donvale. The estate ran the whole length of Lisbeth Avenue and took in parts of the side street.

Alistair Knox provided plans and built houses as required on the subdivision. He appears to have built 46 houses in all. Almost all still exist though many have been altered and added to, some in rather extreme ways.

Subdivision plan, houses on the lots coloured red were designed and built by Alistair Knox. Street numbers are in black

Work started in 1957 and continued though until the early 1960s. By today's standards these were modest houses but in the 1950s they were cutting edge for a mass market suburban redevelopment. The character of the Estate was created by Knox's early environmental ideas. See " target="_blank">this article by Harry Perrot which appears to quote Alistair verbatim, though without attribution.

Unique for it's time was the use of eucalypts and other native vegetation. This with the Knox designed houses that blend into the hillsides creates a touch of Eltham 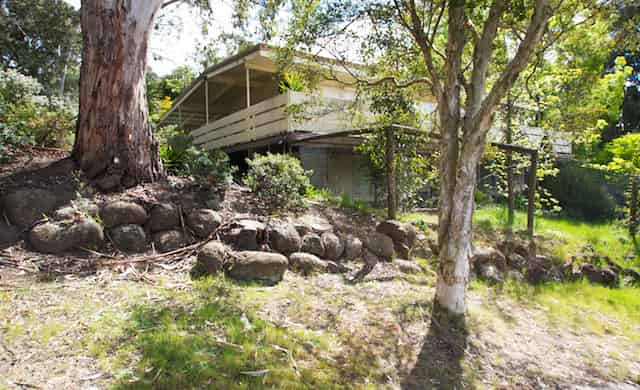 The blocks vary from flat to steep. Knox used a variety of solutions to solve these problems. Plans exist for three bedroom houses on all possible slopes. They sold for about three thousand pounds ($6000). The price included floor coverings, septic tank (the estate was not sewered), washing machine, stove and hot water system.

Suggested designs for the different slopes follow. The houses followed the design worked out in his house in York Street Eltham. Concrete slab, Stramit roof covered with malthoid and creek gravel, structural window sections and timber or brick infill and end wall. The roof was supported on a large central oregon exposed beam with 8 by 4 inch exposed oregon rafters. Internal wall were not load bearing.

The new owners like the non load-bearing walls which they could move at their pleasure but disliked the malthoid roofing which after about five years became increasingly porous. Hamish Knox says that 'Whenever it rained, the phone rang. It was terrible'. So nature gave way to steel and the roofs were replaced with clip-lock steel decking. Alistair's great heroes, Frank Llyod Wright and Burley Griffin also had problems with leaking roofs.

Some of the present owners have lived there for over 30 years and raised families in them. The roof problem now a distant memory, they seem extraordinarily happy with their homes. All mention that they are warm in winter and take a long time to heat up in the summer. Most of the houses have had internal wall removed and many have been extended as families grew.

According to Mrs Johnson, an original owner, when the 1962 bushfires brushed the end of Lisbeth Avenue none of the houses were burnt - the eves were singed but the concrete slab didn't allow draft under the house so, unlike their brick veneer neighbours, they resisted the flames.