Shortly after Margaret Lord's departure for London Alistair met Mernda Clayton, whom he was to marry in 1937. She was the daughter of 'Reggie' Clayton, one of the more interesting masters at Scotch College.

On alternate weekends I visited her in the country, where she worked as a domestic-science teacher. She had taken such courses because she felt she was the most undomesticated person she knew of, and she knew these studies were critical to handling marriage successfully. We would go on walking tours around Clunes and Creswick, where she was stationed, and rediscover our historic past. These journeys to forgotten places cost us the princely sum of 2/- per meal and 2/- for a bed, and there was always the romantic hope that we might pick up a gold nugget on the side. Mernda would travel to Melbourne on the other weekends, and I found myself in a changing social environment. Mernda belonged to a creative-dance group under Joan Henry, and their expressive style of dance bore little resemblance to the eurhythmic-oriented motion generally preferred by ephemeral females trying to appear graceful.

When Mernda's long Christmas holiday arrived, we thought about where we should live. There was the possibility of purchasing a foreclosed house, either in the Hartwell or Camberwell area, for a small deposit with repayments spread over thirty years; but the general mediocrity of the facades' designs and the repetition of the suburban street - where every nature strip was edge-trimmed to within an inch of its life - turned us away from thinking respectability. The indelible negative effect all this had on me prevented me from ever owning a house on a sealed road. 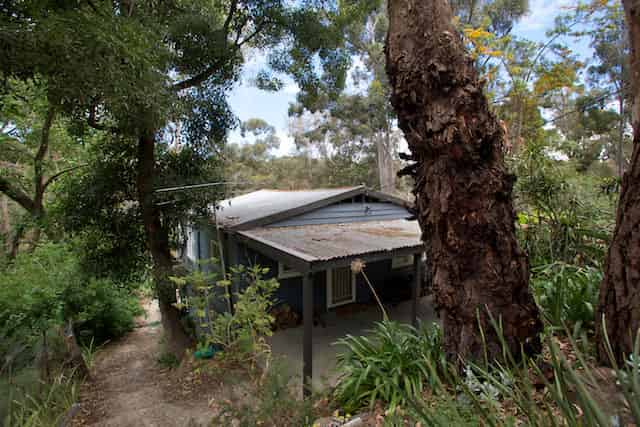 The Fairfield boathouse where they lived - altered but still standing
Photo: Tony Knox

Mernda and I then explored the Yarra River for a boatshed or some outbuilding which we could adapt, and finally we found the most idyllic solution for 15/- per week located in Fairfield.

Our building comprised one main room about six metres by seven metres with a fireplace on one side, and some cleverly placed cupboards behind a waist-high bench on the other, which formed a backing to the low modern divan I made to sleep in. During the day, it formed part of the house furniture. Such innovation was twenty years ahead of its time, and its simplicity - which so evidenced the importance of deleting the inessential in design - has never left me. ... The remainder of the building was a low verandah at ground level which gave entry to the main room. Another verandah wing formed the high, riverside facade of the cabin. It contained a tiny shower room on the west end, a kitchen flap-table in the centre, and a cooking section on the east. The continuous run of windows was set ten feet above ground level and looked both ways over the water and along the idyllic bushland from Rudder Grange down to Willow Dell. On the flat space immediately below, we could look down and observe a grey-thrush's nest hanging in the branches of a red flowering ironbark. He honoured our presence daily with his twice-repeated deep-throated song of the eternal bush. This idyll was located fewer than six kilometres from the centre of the city. 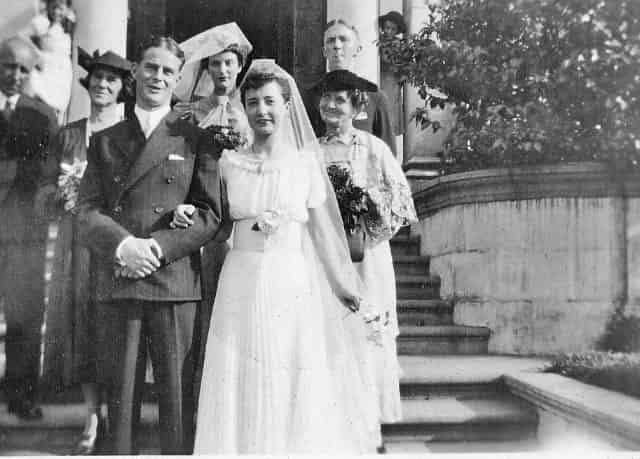 Soon after we were married in the Scotch College Chapel, Mernda became pregnant with our first child, whom we named Anthony in honour of Anthony Adverse, a widely read book of the period."

"I was twenty-five when Anthony ('Tony') was born on Saint Patrick's Day 1938, and our family enjoyed much of the year before the outbreak of World War II in the natural, serene environment, only vaguely conscious of what our unpredictable and foreboding future would bring. 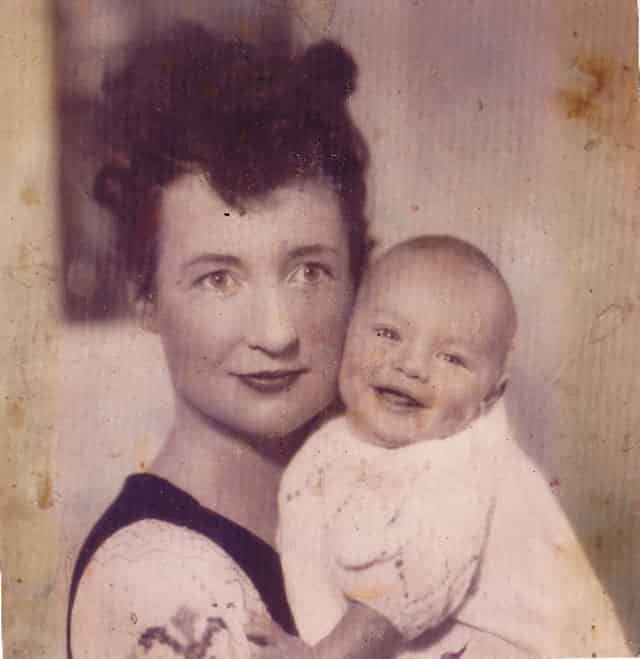 Mernda again became pregnant a few months later, and it was clear to us that our little cabin by the stream would be too small; we would have to find some new living accommodation.

Mernda and I were determined to purchase land by some means or other, and build. The fact that my take-home pay was about 7 pounds weekly, which barely kept us in the necessities of life, made no difference. We thought we would get some assistance for a deposit from her mother and pay her back as we lived in the building. Isabel 'Nina' Crutchfield was a wonderful mother to Mernda, and a sincere and unusual woman. 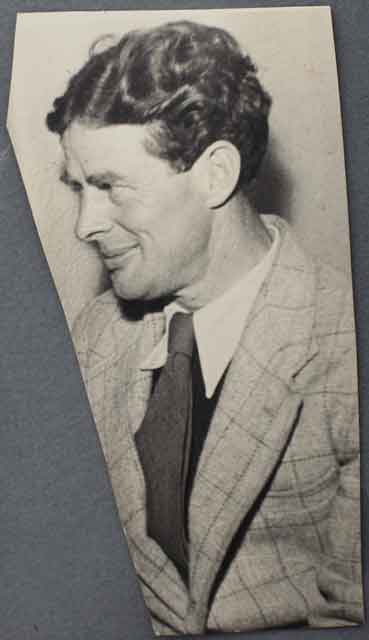 Alistair Knox at about this time. The missing person is probably Mernda.

The bank executives had never given their employees any concessions concerning housing ... However, in 1938 the employees managed a concession so narrow that I believe I was the only person ever able to take advantage of it. I had to find about 150 pounds only for house and land, provided the house contract did not exceed 810 pounds. In the end this amount was contributed personally by the bank manager across the road, with whom we dealt every day. I made arrangements to repay 15/- every fortnight. These figures sound quite unreal today, but at the latter end of the Depression they were commonplace. A single-pound note was worth approximately a day's work.

I eventually bought a block of land in one of Burley Griffin's remarkable subdivisions for 105 pounds. It was at the junction of Mossman and Glenard Drives. The bank accepted, with reservations, the fact that the unmade road was a mile from public transport and that the structure I had designed was small but quite appropriate and original. The house was sited beneath a primordial redgum, which we heavily chopped back because in those days placing a house near a tree was considered little less than suicidal.

Mernda and I eventually signed a contract for the exact amount we could possibly afford. The week we were to start building coincided with the outbreak of World War II. I remember the events clearly. It was a Friday, and Chamberlain's ultimatum was to expire at 9 p.m. Melbourne time. Savings Bank reopened for an hour and a half on the traditional payday to allow depositors to pay in but not to withdraw funds - in the best Savings Bank manner.

This all made no difference to the building of our house. Two men turned up each day, set out and dug the stump holes, and started erecting the frame. 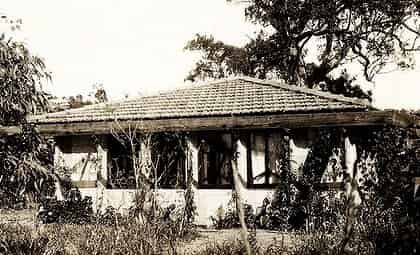 The most interesting aspect of our new house was that it was situated on the east side of a large triangular road reserve in Burley Griffin's brilliant, curving Glenard subdivision, one of three that had transformed the district into a landscape in its own right. He had developed the basically circular concept of Canberra into a freer, more flexible totality where it became apparent, if one studied it, that each allotment had been individually located so that no house would obscure a neighbour's view of the Yarra Valley, which lay below the escarpment on which they were situated. ... By a remarkable chain of events, Griffin had lived on the western side of the same triangle of road reserve which our land faced, so that we would have been neighbours had he remained in Heidelberg. His original lifestyle never appeared over-burdened with money problems. His fertile creativity was able to transcend all obstacles in one way or another. His Heidelberg house was only eight hundred square feet in plan. It was a simple square with two short wings protruding from each inside wall. These formed alcoves which only fully closed at the bathroom. The bedrooms were screened from the main living areas with leather curtains, which could be pushed aside at will so that the house could once again become a total space.

The family moved into the new house, a Californian bungalow with light blue shutters, in 1940. Alistair and Mernda's marriage collapsed after the war but they still lived in the house occupying opposite ends of it. In 1950 they moving to a rambling weatherboard house in Eltham.