Alistair left Scotch College at the end of 1927 and started working at the State Savings Bank of Victoria shortly afterwards - a few months before his 16th birthday.

The bank was unadventurous and secure and a home for the physically and mentally lazy. I was still under sixteen as I found myself knocking at the door to begin work. I was ushered in and made to feel at home immediately. ... The Savings Bank office was ancient and dusty and quite Dickensian. My duties were simple and uncomplicated. When Tommy Gatliff - an old digger who was the teller - opened the strong room, I would bring out the ledgers and the registers.

The bank staff was headed by our manager Alfred 'Z' Davis who, with his large-bodied and powerfully-voiced wife, and two adult children, lived in the attached residence. ... He was nicknamed 'Z' because he was always the last to pay for his drinks and other social obligations. In the end, he would pay his share, but one wondered whether Z secretly hoped that one of his drinking companions would slide under the table before his turn arrived. ... Z Davis suited Port Melbourne as much as it suited him. Each had seen more salubrious days. Z's nose was curved to the shape of his pipe, as though they had grown together because they always were together. They were inseparable. Z's face was grey and wrinkled and not always as clean-shaven as one would have expected a bank manager's to be. His grey hair was somewhat unkempt and too long for the short-back-and-sides fashion of the period, and his suit was a little shiny and bore vague streaks of tobacco ash and other odd stains; but he still maintained a gentlemanly appearance - provided one did not examine him too closely.

My introduction to work had been very convenient and easy, and in the warm early autumn afternoons I was able to get home by 4 p.m. to go swimming until dinner time. The feckless future awaiting me had not yet made its presence felt, and when it finally did I found I had no means of escape to a more dynamic and challenging lifestyle.

The Bank also insulated him from the worst of the hardships of the Great Depression though his father's death in 1932 at fifty-two, made life difficult for the family. 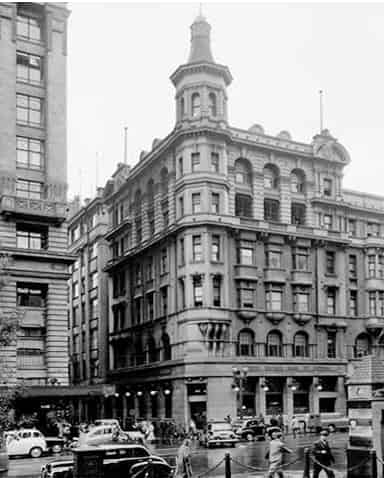 I was totally unsuited by nature and by desire to repetitive clerical work. There were no adding machines in the bank's branches, and the sight of those innumerable sheets of figures, forty to a sheet, which had to be added and balanced three times each year became the stuff of nightmares to me. My secret hero among my twelve hundred fellow employees was an odd man named Freddie Stocker, who was regarded by many as an eccentric; but he did have the ability to add up all the money columns at one time - instead of doing the pence column first, followed by the shillings, then units, tens, hundreds, and thousands of pounds. Freddie would fly up the sheet, adding pounds, shillings, and pence simultaneously, and he never made a mistake. By comparison, it sometimes took me nearly half an hour to balance a single sheet. To make it worse, even those I did do were not infrequently 'faked', which meant they still retained errors when they were added to the total result. This difficulty with simple arithmetic became a nemesis which haunted me in the bank until the day I left in 1948.

In 1930 he was transferred to the Swanston Street office in the city. He was eighteen and his life was beginning to change.