"I found myself living alone in the experimental house I had erected on the bottom of our three acres during the interim to enable us to let the largest building on the property. It was a doubly confusing situation, because I had been miraculously able to borrow money in the recession to finance this project; I took this to be a sign from above that I would come through my temporary difficulties. The building system embodied original concepts that could hardly help but succeed."

The 'experimental house' was a rectangle placed on a concrete slab, roofed with Stramit supported on exposed dressed oregon beams which ran from a large section oregon beam running the length of the building, to the exterior walls. The Stramit which dictated a four foot module was covered with a skin of malthoid and creek gravel (small white pebbles). The exterior wall were floor to ceiling window frames with timber or brick infills. The Stramit (compressed straw enclosed in cardboard) was the ceiling. The internal walls were prefabricated in the joinery, they were stud walls covered in leather patterned tempered Masonite, they were not load bearing. All detailing was kept to a minimum. The Masonite sheete were V jointed when they met. There were no architraves - the masonite finished with a bevel onto the door jamb. Entrance was through a four foot wide sliding door. Floor covering was cork sheeting 6mm thick and 910mm wide glued to the slab.

This was building stripped of all inessentials. It was efficient and fast - lined and locked up in about a fortnight - and it was cheap. These houses could be built today for $1000 a square metre, then the cost was substantially less. In 1958 houses on the Hillcrest Estate were priced at $6000. 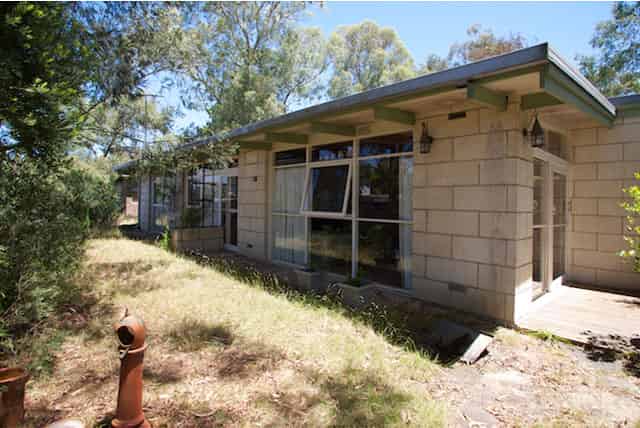 Side view of house in the Hillcrest Estate
Photo: Tony Knox

During this period building took precedence over design. Though modest by today's standards they stand up well.