Apart from the work of Ellis Stones and Edna Walling, there was practically no original landscaping in Australia before the late 1950s except for that of Burley Griffin and the pre-First World War Guilfoyle, who was responsible for the Royal Botanic Gardens. There was, however, a growing awareness of Australia's indigenous flora, but the practice itself was mostly limited to a formalised, European spirit. Gravelled drives and herbaceous borders winding between neatly cut English grass lawns with deciduous trees here and there were as far as our colonial traditions permitted us to go. Gordon Ford, Ellis Stones' pupil, was the one exception - he outdid his master in the mossy-boulder department. 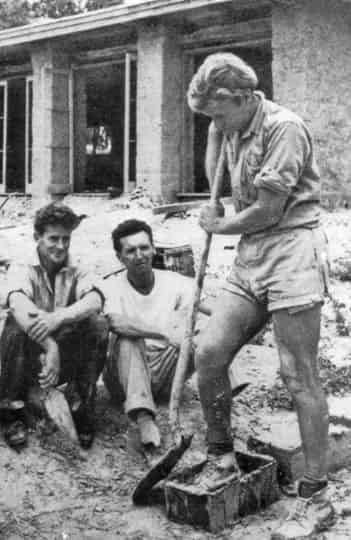 The enigma of Australian conservatism coupled with a natural originality has always plagued our progress towards mature nationhood. I took part in the first part-time landscape course the RMIT ran, and it was immediately apparent that there was a real drive for discovering our natural heritage. In many ways, the indigenous landscape sprang from a folk movement rather than from the usual specialised informed minority. We formed a casual association, with a view toward eventually establishing our own professional landscape institute. We met at Mervyn Davis's house in Black Rock. Mervyn was the recognised leader of a small group of females who had studied at Durham in England. They felt that they were the aristocracy of this group, while men like Ellis Stones and I were regarded merely as also-rans. I didn't mind their relegating me to a hewer-of-wood, drawer-of-water position, but their belittling of the shy, sensitive, poetic, and able Ellis 'Rocky' Stones was quite another matter. In 1961 we all sallied forth to Canberra to take part in an Australian Planning Institute conference. They had graciously allowed our uneven, somewhat ragged group to be an adjunct to their earth-shaking activities. I found that the conservatism still persisted in the Rex Hotel, the locale of the conference - from the major domo who presided over the dining room, to the plush-carpetted hallways and silent elevators where one met one's companions, who appeared a trifle browbeaten by all the expensive officialdom. At this conference, I renewed my acquaintance with George Clarke, who asked me to handle the landscaping aspects of a neighbourhood unit called Mawson, which he had been asked to design by the National Canberra Development Commission. The idea of trying to locate five thousand people in the high-country landscape was an attractive challenge. I took George out to the subject land - where sheep were still pastured - at midnight to allow the animals to indicate to us from their own habits the most congenial situations for human habitation. I had seen enough from the conference to realise how little understanding there was of seeing the environment as God's handiwork, and how much tidiness and convenience dominated the concepts put forward. The new ideas were finally departing from exotic plantings, but the native trees were still being planted in straight lines like orchards. In designing the Mawson neighbourhood unit, we tried to counter not only the usual suburban tradition of placing convenience before creativity, but also the aversion people felt to allowing even the faintest breath of a mixed-use to rear its ugly head, or to permitting any eccentricity at all of life to be revealed. I saw the Mawson landscape as typical Australian Alps high country, and I believed that the plan should clearly express this quality. There were natural stone outcrops, which could so easily be incorporated into the plan. I proposed that the permitted use of battle-axe blocks be used to in order to develop a different way of living: if every second allotment had its entrance located at the rear, it could then face onto a common accessible only by foot. But the reception these proposals received at the hands of the decision makers was partly derision, and partly unbelief.

The 'professional' members of our landscape vanguard felt it would be a decade before Australia would be eligible to form its own institute, but hard-working and experienced practitioners like Ellis Stones thought it should happen without delay. One watershed was the botanic example versus the causes of it; another, the survival landscape versus the leisure landscape. I viewed the landscape as very fragile underneath its wide exterior, which embraced three factors: Sun domination, Water hunger, and Survival consciousness. When these three were present, the unique desert character of our great Pacific island emerged. Where they were missing, we were left with syrupy, Northern-Hemisphere prettiness.

Year by year there were further discussions about the proposed institute until an attempt was put forth to make it official, in 1966 at the Sydney Planning Conference. The 'professionals' brought down a proposed initial corporate membership which would consist of themselves and a branch of sanctifying professors, but would delete the practical practitioner. We - the unwashed - had a different view. There was to be one meeting: to bring the institute into being and to canonise the corporate members simultaneously. During the afternoon prior to the meeting, we circulated those in Sydney who were suffering the same fate we were. I was astounded to hear Bruce McKenzie, who had produced more practical landscapes than anyone else, saying that he couldn't be a member because he was a contractor. We disabused Bruce and others of this misapprehension, and at the meeting we moved that the institute be launched and that those who thought they had a case for admission submit evidence of their capacities within three months. It was rather sad to hear Ellis Stones plaintively advocating that works produced should supersede courses attended. We won the vote by a narrow margin - to the confusion of the opposition - but in the end, it prevented the institute from being delivered stillborn. The old-school-tie system of profession by privilege rather than profession by performance had been narrowly averted. It did not prevent a scramble on the part of the academics, however, to gain the authority to act as professionals regardless of their true ability. A series of official courses were started in each state, and I found myself on an education committee for Victoria with Professor Spooner - the president - and Beryl Mann formally deciding what the standards should be. It was a slightly amusing situation because my own level of education was Year 10 at Scotch College in 1927. This activity occurred six months after Ellis Stones, Peter Glass, Gordon Ford, and I and a few others gained admission to the original corporate membership in Victoria by submitting evidence of our practical ability; this had also became a prolonged affair. I submitted reasonable 'evidence', but the answer came back that more was required. Since at the time I was in the midst of building the new homestead at Cobungra - the biggest cattle station in Victoria, in the Mount Hotham area - I went to the trouble of preparing a study, in both story and photography, of the spirit of the whole high-country scene. Cobungra extended over an area up to twenty five miles by ten miles and included impenetrable mountain ranges and undiscovered valleys. The station ran about three thousand Hereford cattle and six thousand sheep. Much of the stock spent the whole of the summer free, ranging around the higher, unfenced areas; only when the winter snows set in did they return. Cobungra's owner - Don Richardson - and the Faithful and Treasure families appeared to own most of the acreage of the high plains, and each of them became a tradition in his own right. My environmental study impressed the examiners sufficiently, and I was admitted to the Institute. Peter Glass gained acceptance also, through his artistic contributions to my survey. Gordon Ford also received the letters AILA by submitting a last-minute photographic folio. We all felt right had been done in the end, especially as it was the famous Dame Sylvia Grow, the universally acknowledged landscaper, who urged the selection committee to take a middle course. Two years later, in 1968, many of us went to the Australian Planning Conference in Perth and could feel the landscape beginning to flex its tiny muscles. For four consecutive days, we were harangued on the subject of the Case Study of Perth. The West was in the grip of the first great mineral boom, with new paper millionaires being created every day. Every conference chart had a list in one corner to classify precisely what the population did. Every one commenced 'Workforce 64%'. This '64%' were the silent majority we never heard from, so I did a small survey on my own to ask them what they thought about it all. One consistent answer came back: the boom was ruining them! - soaring rents and land prices with no compensating advantages for the workforce. It was just another example of the rich getting richer quicker than usual and the poor getting poorer at an increasing rate. The natural landscape naturally came a bad third, except for some manicured pockets. Each of the long-suffering delegates was finally allowed one minute to ask a question and receive a four-minute reply or, alternatively, to make a five-minute statement. After some time I got stood up and said that I wanted to talk about people. I then had the satisfaction of cutting the conference to ribbons in just four and a half minutes. I couldn't believe the response - and the justification - of the conference's leading speaker, who shouted, 'Mr Knox is right! We've forgotten people!' I did more good for my reputation in those few minutes than I had ever done before.