Alistair Samuel Knox (8 April 1912 - 30 July 1986) designed around 1,000 houses and built many of them but he was not an architect. Largely self taught, he believed that you could do it yourself with the use of available resources by working in harmony with the environment. In large part, these ideals were formed by the strictures of the immediate post-war period, his circle of friends in the artistic community and an independent view of the world.

He was an Eltham shire councillor from 1972-1975 and its President in 1975. He was a founding member of the Australian Institute of Landscape Architects, becoming a fellow in 1983. In 1982, four years before he died, the University of Melbourne awarded him an honorary Doctorate of Architecture.

Born into a deeply religious family on Easter Monday 8 April 1912 his youth was spent in the inner Melbourne seaside suburb of Middle Park. He attended Scotch College which he left at 15 to start work in the State Savings Bank of Victoria.

In his 20s he developed an interest in the arts and spent time with painter Sam Atyeo, sculptor Matcham Skipper, painters John Perceval, David and Arthur Boyd and the many others who moved in bohemian circles. 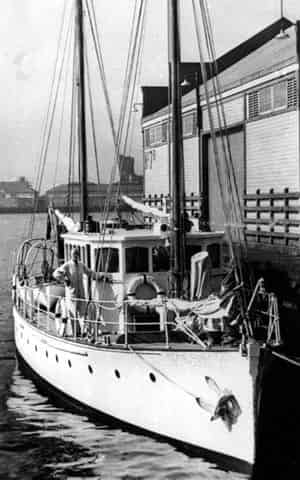 In 1944 he joined the Royal Australian Naval Volunteer Reserve and was drafted onto HMAS Martindale a 60 foot yacht which patrolled the waters of Papua New Guinea until the end of the war.

On discharge in September 1945 he returned to his duties at the Bank and in 1946 started a Rehabilitation Course in building construction at the Melbourne Technical College. Halfway through this course he started building his first two houses near the family house in Eaglemont just managing to keep his studies ahead of construction requirements.

After the 2nd World War the extreme shortage of building materials forced Knox to consider using mud brick. The banks conservative lending policies made financing difficult unless one was eligible for a war service loan. In 1947 he built a house from mud brick in Montmorency. Work had begun before the Eltham Shire Council issued a building permit. Disaster was averted when he provided the Councillors with copies of G.F. Middleton's recently published paper on mud brick for the Commonwealth Experimental Building Station. A permit was granted and a career was born. 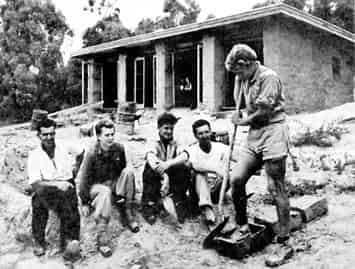 In 1947-48 he visited the houses under construction before and after toiling at his day job in the bank. Long-service leave in 1948 allowed him to resign and, after considerable soul-searching, take on designing and building full-time.

His building was revolutionary for its time and incorporated some untried techniques which have since become standard practise. These included the first domestic use of concrete slabs, and the excavations, often into hillsides, on which they rested. This allowed the buildings to connect directly to their environment.

The workers in the early days tended to be out of work friends from the artistic community like forelady, Sonja Skipper from Montsalvat and many others such as film-maker Tim Burstall, artist Clifton Pugh and landscape architect Gordon Ford, as well as local Eltham identities like Horry Judd. Many of his clients were also part of that group.

Over the next few years actual tradesmen were employed and in the early 1950s a joinery was built at the rear of Pine Trees, the family home. This marked a distinct change in style as the houses became less individual and began to conform to a modular design pattern.

The joinery produced the window frames that made up 60 per cent of the external walls. There were numerous houses produced in this period all based on the prototype he built for himself on the corner of the Pine Trees property. These houses were rectangular with a large central beam that supported a gently pitched Stramit roof finished with a skin of Malthoid, bitumen and creek gravel. The walls were primarily glazed with timber or brick infills.

The credit squeeze of 1961 had a deleterious effect on the Knox building enterprise. Shortly after he managed to obtain land in Mt Pleasant Rd, Eltham from an orchardist friend, Eddie Anderson. On this he began work on a large mudbrick house for his expanding family. 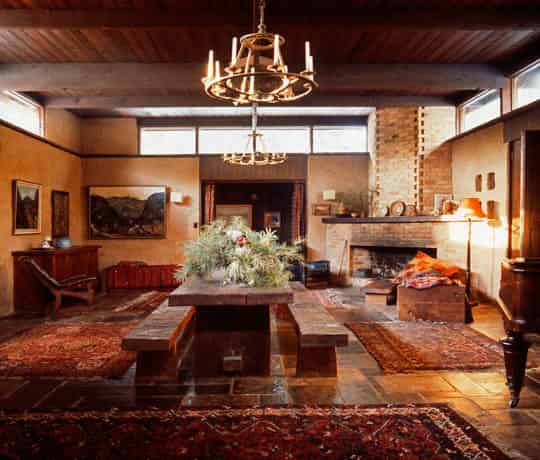 The Knox house returned in spirit, to his earlier simplicity, though on a much grander scale. It marked a renaissance in Knox's design career and sparked a renewed interest in his design and environmental concerns. It was a period of rebirth which brought together his ideas on living in harmony with the environment in houses that were often made from the mud on which they stood. Matching the increasing affluence of the times these buildings were larger and more luxurious than those of the 1940s and 50s. 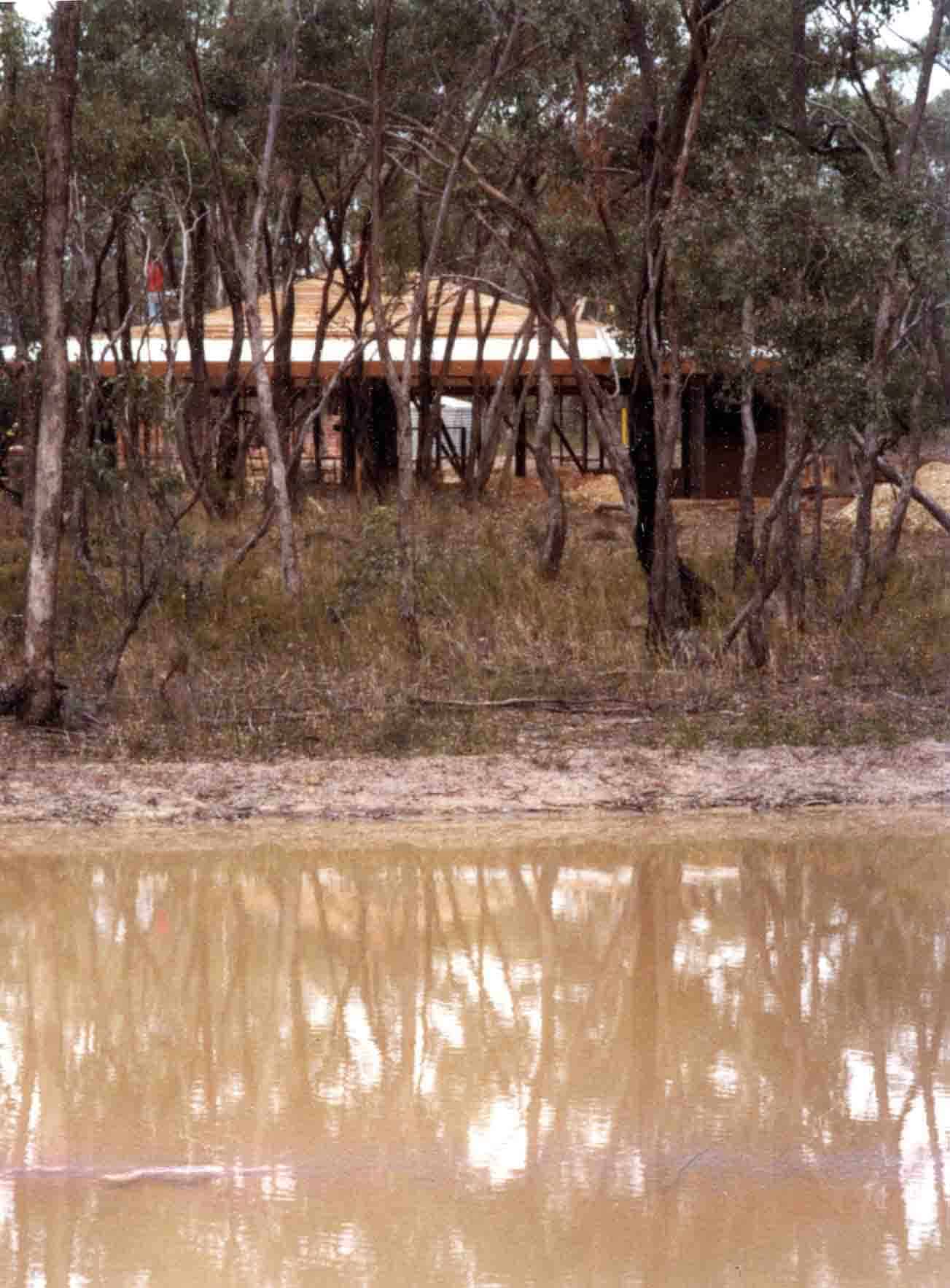 The Laversha house from the man-made lake
Peter Hellemons, the foreman of the building enterprise entered into a partnership with Alistair in which Hellemons took control of building, freeing Alistair to concentrate on design. This was a very fruitful period and one in which Alistair's ideas and designs were finally recognised.

During this period landscape architecture became an important part of Knox's output with work in Canberra and an environmental design for Cobungra Station in Gippsland amongst others.

After the partnership with Hellemons dissolved Alistair continued to designing houses until his death visiting clients on 30 July 1986 at Sunnycliffs near Mildura, Victoria.

In 1948 he said 'I began to comprehend that environmental planning consisted of bringing the building and the natural environment together into one indivisible whole. Each was the counterpart of the other which sought to reconcile the whole scene rather than to act as a disjointed and competitive element within it.'

It was an essential part of the Knox philosophy a view that was well before its time. His belief was that people, their houses and the environment should be a harmonious whole. He loved the Australian bush and built from it's mud and used it's timber in his houses. For him damage to the environment meant damage to society.

A thousand houses moulded into the landscape are tangible evidence of Knox's vision. Perhaps more importantly was the inspiration he provided to the people he touched. Those who came seeking advice, his clients and the community in which he worked. Always ready to assist any who aspired to create their own world in the Australian landscape. He dispensed a lifetimes experience in practical building.

There is also an appreciable body of written work - three books, numerous magazine articles and a wealth of unpublished material, much of which appears on this site.