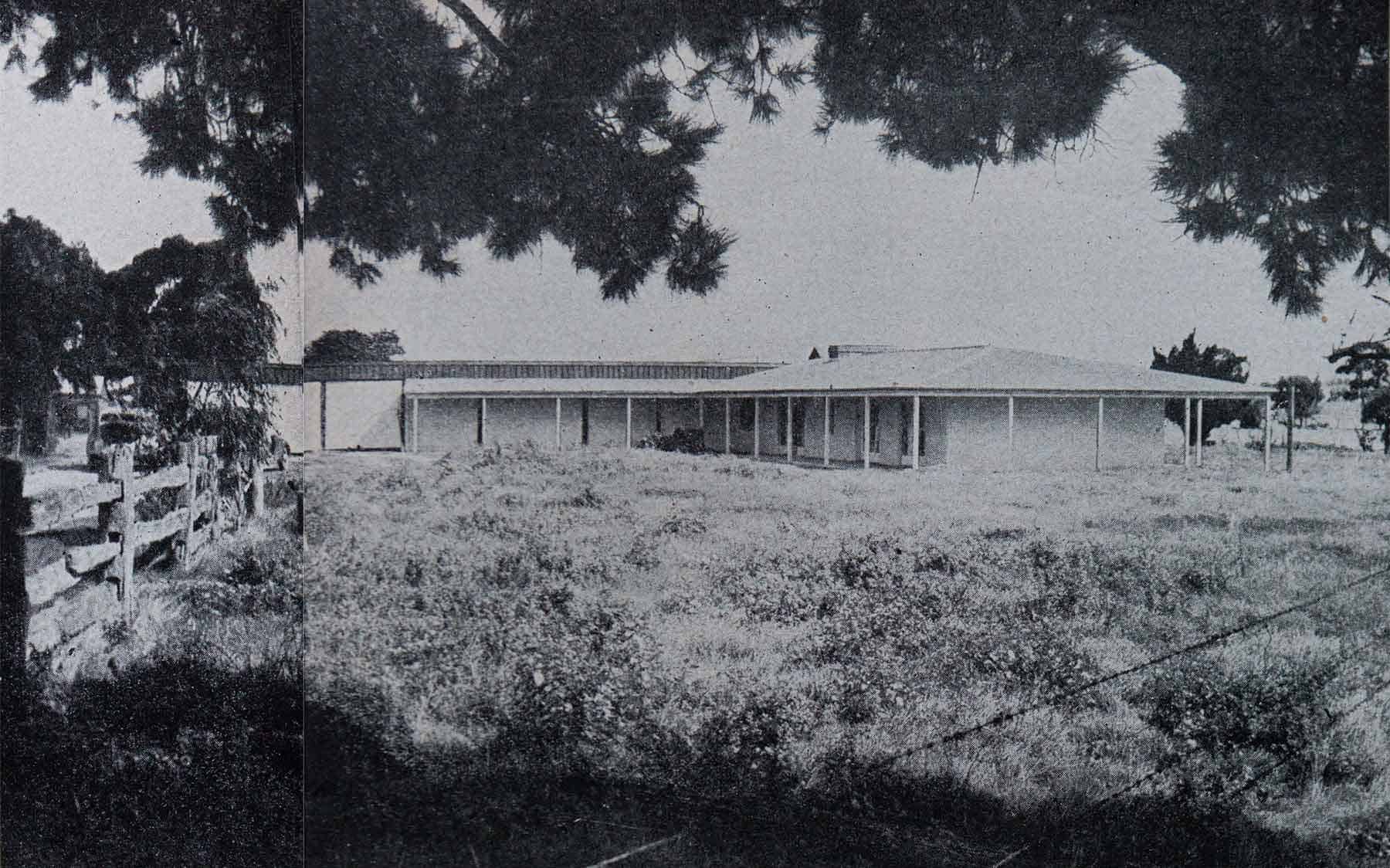 Sweeping lines of this farmhouse seem fitting for the surroundings-so much better than if a suburban style house were transplanted into broad acres. Wing to left houses farm equipment. Garage is at end of verandah.

When "Sunningdale" homestead at Murphy's Creek, Victoria, was rebuilt recently all building materials were scarce and expensive. And Murphy's Creek was as difficult a place to get supplies to as one could imagine.

It is on the road connecting Tarnagulla and Moliagul, famous names in the gold rush days. Now they are backwaters remote from main roads, living on memories. Only Mount Moliagul remains unchanged, dominating the wide, slightly undulating plain. Its form reminds one of a reclining lion, brooding over the excitement of the oId times, of pioneers and miners and the most fabulous of all gold nuggets, The Welcome Stranger, which was found at its very feet.

Old "Sunningdale" homestead was a collection of buildings that leaned against each other at odd angles and in varying degrees of decay. Some, more than 80 years old, were riddled with white ants and in danger of collapsing. 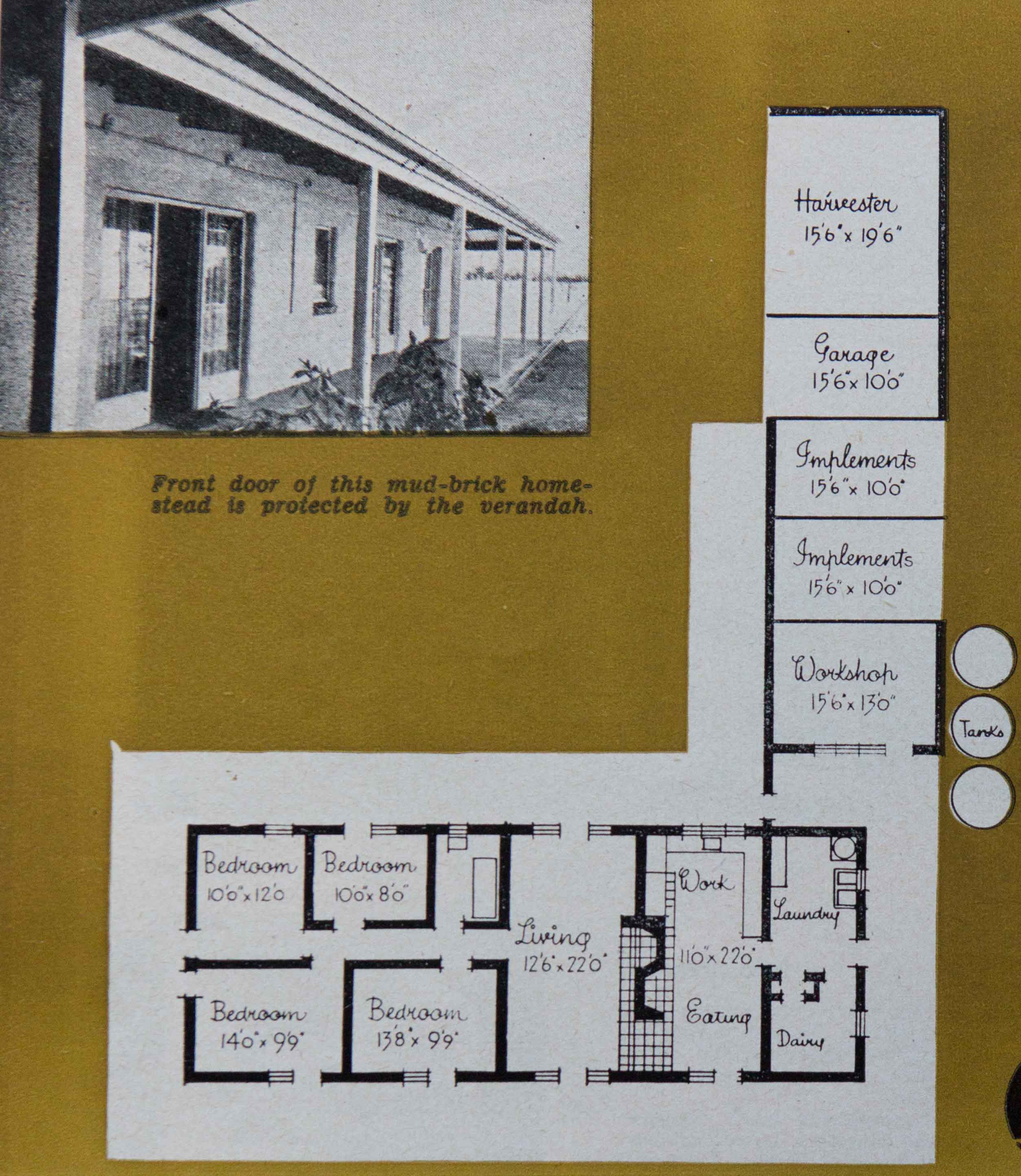 The cost of rebuilding had to be proportional to the value of the 1600 acre farm, so it was essential to use all possible material from the existing buildings in the new structure. About 4000 square feet of building was needed adequately to cover the farmer's requirements. A survey disclosed that there would be sufficient galvanized iron for the roof, lining boards for the ceilings, bricks for the chimneys, tanks, and a reclaimable well.

The main problem was then to find a suitable material for the walls. Mud bricks were chosen.

Earth, in the form of mud bricks has these points easily obtainable, economical, white-ant proof, cool during the hot summer, warm in winter, and last indefinitely. 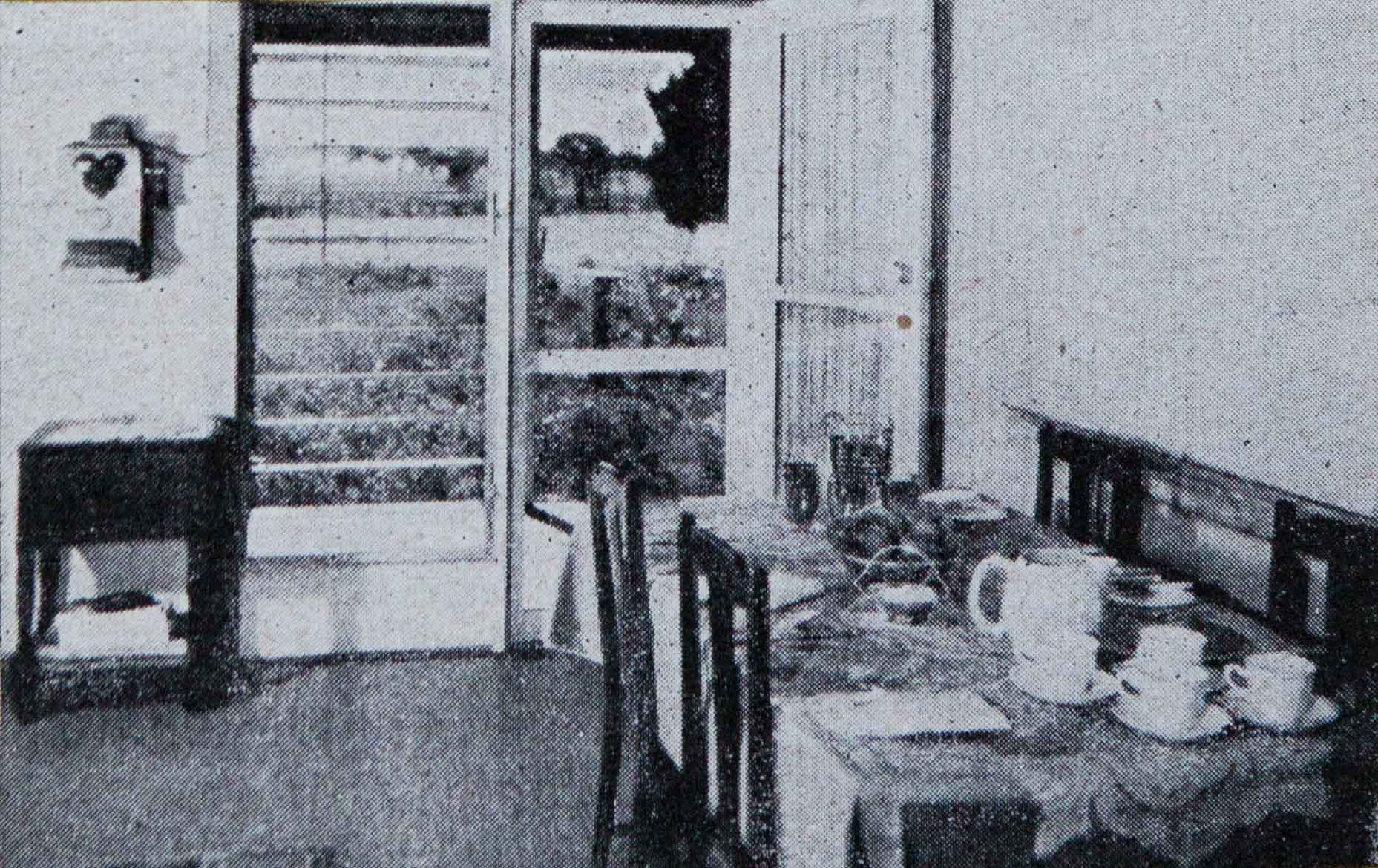 In addition earth is a traditional building material in the district. A considerable number of adobe houses have been built there by the early settlers, and these are still in good repair. Mr Arch Hancock, who lives in one built by his pioneer father, advised the builders to plough about an acre of paddock, scoop the topsoil into heaps, wet it down and make it into what are known as pise bricks.

Though this is contrary to the usual practice which prefers a higher proportion of clay, the bricks made at Murphys Creek proved excellent.

Being a farm and set in an elemental environment, the house and to be clean-lined, simple and completely utilitarian. The plan shows how it was 'zoned' to provide cool summer side, a sunny winter side, and a utility side. Zoning was further developed into a bedroom wing on the east, a living section in the middle. and a utility wing (including an implement shed some 50 ft. long on the west.

AU rooms of the house were given access to the spacious verandahs by means of window-door units of full-length glass which gave controlled ventilation, light and passage-way. It has proved a highly successful feature and is applicable to all types of country homes.

It was necessary to organise the building work so that the farmer could remain in occupation while the builders were preparing to take the roof from over his head.

First the bricks were made, dried and carted to the site: and stacked. Next, some of the implement sheds which had a lot of galvanised iron on them were wrecked, and re-erected in their new position by forming a skeleton of bush timbers and spreading the roof over them. Later these skeletons were filled in with mud bricks to form a composite mud and timber construction of pleasing appearance and great stability. The timbers were obtained from the far paddock of the property. They were yellow box and ironbark and were set in concrete. They will last a lifetime. 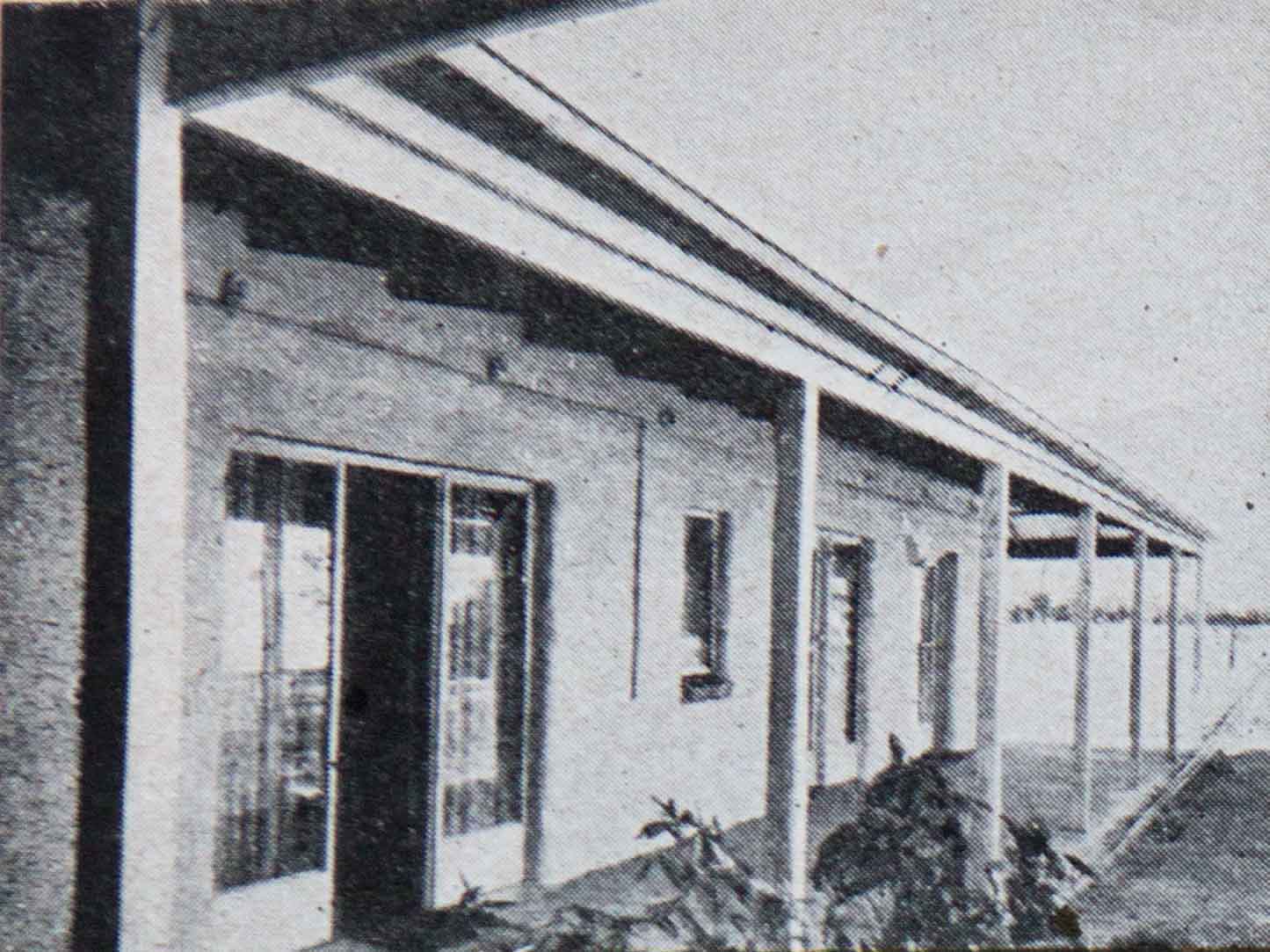 The verandah is constantly used. It is on the same level as the main part ot the house. 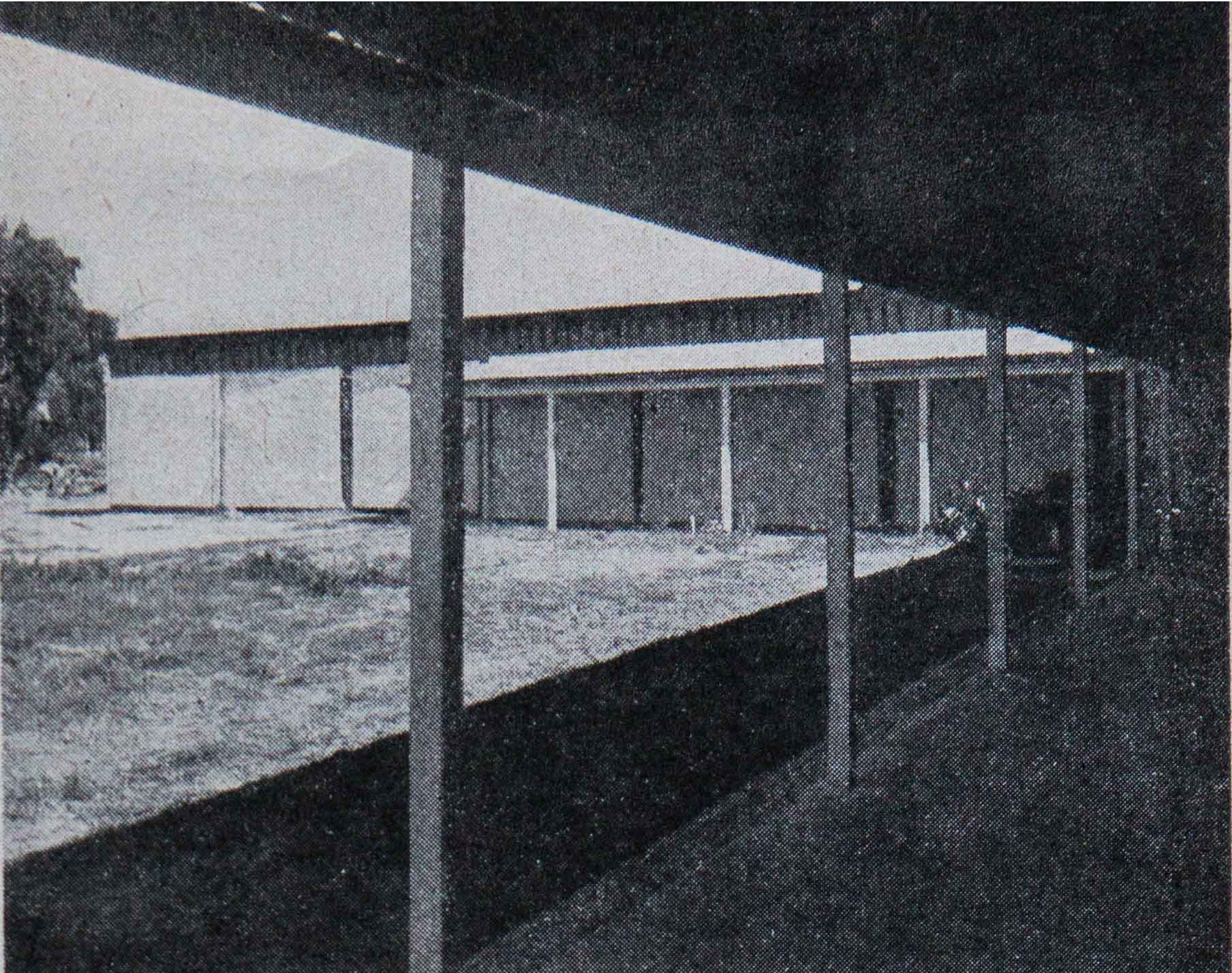 .Implement sheds and garage are connected with workshop which opens off west end of verandah.

The main building was then set out, trenches dug, and a slab of concrete of about 3000 sq. ft. poured. for the foundations, verandah, and slab floors. It gives complete protection against white ants. More utility sheds were wrecked and the walls of the house proper were built and the living section roofed and completed. Then the inhabitants were moved into this section so that the remainder of the old house could be pulled down and the sleeping quarters completed.

From the entrance gate, Mount Moliagul, surmounting the ridge line of the new roof, seems like an old lion looking down at the young cub.

The front door, near the garage, opens directly from the verandah to the living room. A glass door is set between two areas of glass formed from adjustable louvres. This lighting is repeated on the north side wall and by this means the eye is carried through the room to the paddocks beyond.

The roof has been designed to catch every drop of rain water, and a system of tanks, wells and an automatic pump give a gravity fed supply of water to all the normal points of the house and to the urn which always sits on the stove.

The dining end of the kitchen opens out on to the northern verandah and commands a view of the Tarnagulla-Moliagul Road so that passing cars and other objects of interest can be watched in accordance with the normal country method of keeping in touch with the doings of the district. 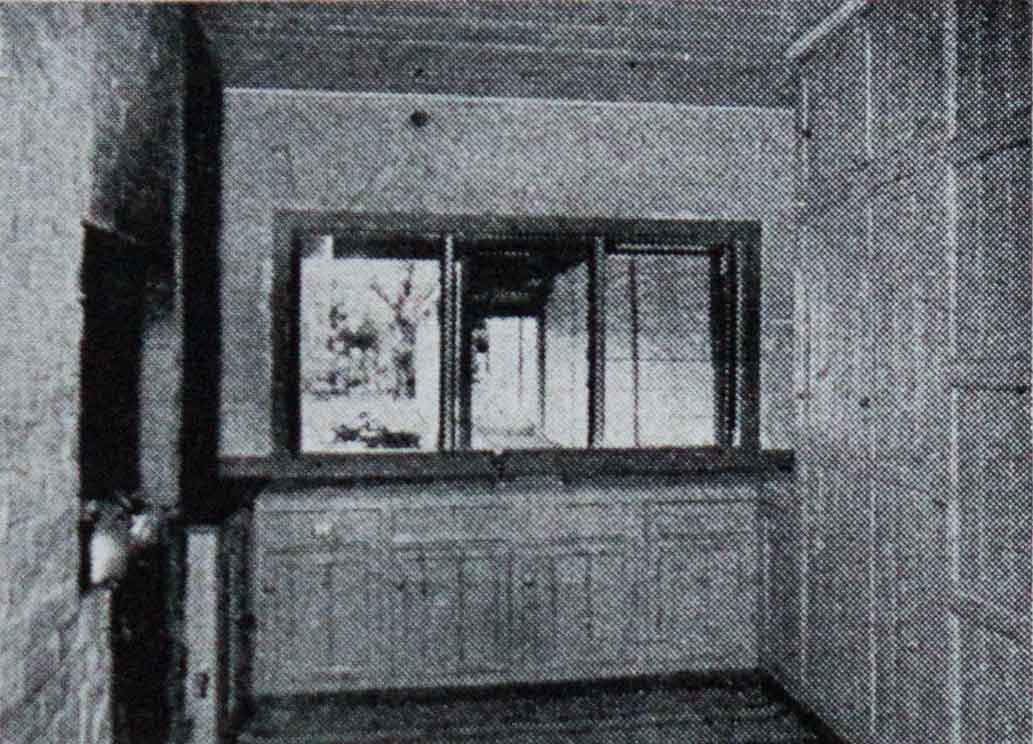 The internal floors, basically concrete, had a liberal layer of Terolas screeded on to them both to waterproof and provide a cushioning to the feet. Felts and linos are the subsequent finish and the floors are 'comfortable to use.

Internally, the walls have been screeded to a tradesmanlike finish in pure earth without any binding agency added as the particular soil has the quality, of adhering to the bricks. Walls have been painted with varying tints of oil bound water paints so that they merge inconspicuously with the timbered ceilings.

The farmer's activities, other than actually working the land, may be reached without leaving shelter.

Externally the walls were bagged down and painted with matt paint and finished in a soft putty colour. The woodwork around the windows is white, and the rafters of the verandah are stained a middle brown.

The wide spanning roof was treated with a bitumastic-aluminium paint and finished a dull aluminium tone while the fascias and verandah posts were painted gumleaf green. The bush timber was oiled to bring them in harmony with the rafters. The massive doors of the garage and the implement sheds facing east were painted a bright gravel color to tie up with the entry yard.