Building techniques started to change shortly after the war. Earth moving came of age. Hand tools were suddenly mechanically operated. The American armed forces brought a new vision of scientific building methods to the Australian scene. Prior to the war, the depression simply meant that human labour was cheap. There was no need or money available for expensive tools. Returning servicemen who had become accustomed to the new way of doing things were not willing to return to the stupidity of heavy physical labour if it was unnecessary.

These innovations were to an extent stillborn while the supply of basic building material was practically nonexistent. With the stepping-up of material supplies, there was also a stepping-up of the use of the new tools available. It was during the Templestowe project that I purchased a substantial all-purpose saw bench and buzzer. It reflects great credit on the designer and manufacturer of this piece of equipment that it is still going perfectly fourteen years later. It had caused absolutely no trouble. It had done everything that a general-purpose saw could be asked to do. Its ingenious and solid design was the brainchild of Bienvenu Products, of South Melbourne. Since that time we have purchased two others similar in design, with a few minor developments. None, to my mind, had just that quality of the first. It had a heart and a soul. 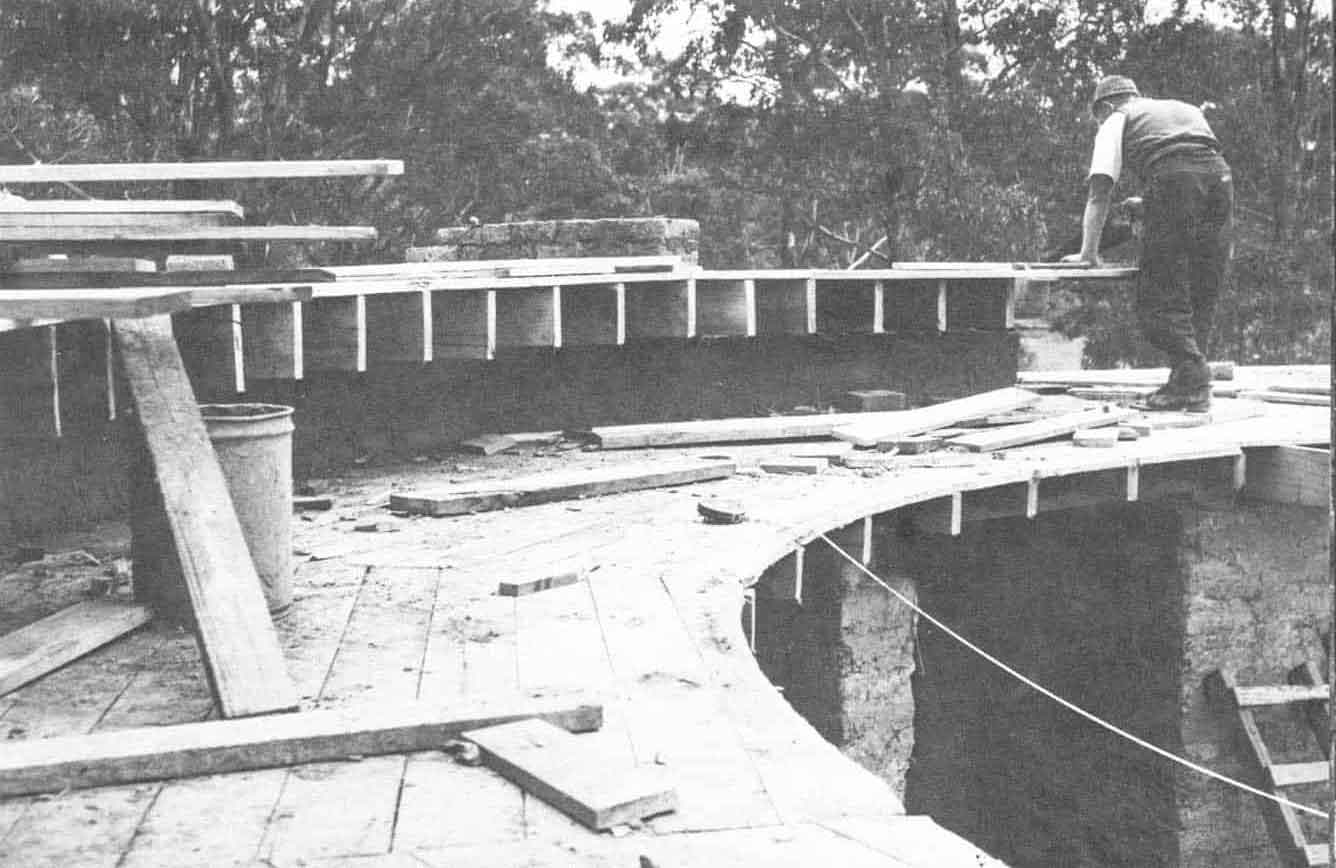 Horrie Judd working on the Periwinkle

As I saw what it could do, I pondered over the Australian building scene in general. It is a scene - or it was in those days - of small groups of men working independently and in competition with one another. Nearly everything was done on-site. Adobe building had taught me the severe lesson of the unpredictable costs of on-site labour. In those joyous days, an exciting test-match could reduce the effective labour result for a day to as little as twenty-five percent of normal. There was always the weather problem. The organisation of materials to the site. The problem of pilfering and the impossibility of anticipating and planning were formidable. Manpower had become very expensive. The honest pick-and-shovel worker did not exist. Those who made the pretence of being labourers commanded undreamed-of salaries, when compared with past conditions. They were, for a time, the new elite.

In domestic architectural circles, the cliché was known as the 'thin line'. The 'thin line' was a method of window construction developed by one or two firms. They were called 'window walls'. They were invariably based on a three-foot module because the roof structural members were placed three feet apart. The modern building had broken away from the cloying weight of Marsellex tiles which had limited the pitch of roofs and paralysed freedom of planning because of their dead weight and the inability to keep the water out if they were sloped at less than a little over twenty degrees. Fibrolite roofing became popular. It had a wider corrugation than the despised corrugated iron that had been the structural pioneer of the land. It was also three feet wide. So was canite, a fibre board with insulating properties. These items were also in better supply than other materials. The window-wall manufacturers did a service to postwar building. It was only a fraction of what they could have done if they had developed their products in a more thoughtful manner. The vertical structural members of the thin-line look were made from six-by-two members that were machined to within an inch of their life. When finished to give the wispy look that seemed to that age so desirable, they contained no more timber than a four-by-two. One third of the material was turned into shavings. Why they were called 'window walls' - when they persisted in finishing five and three-quarter inches thick and the stud walls they were inserted into the remaining four inches - remains a mystery to this day. 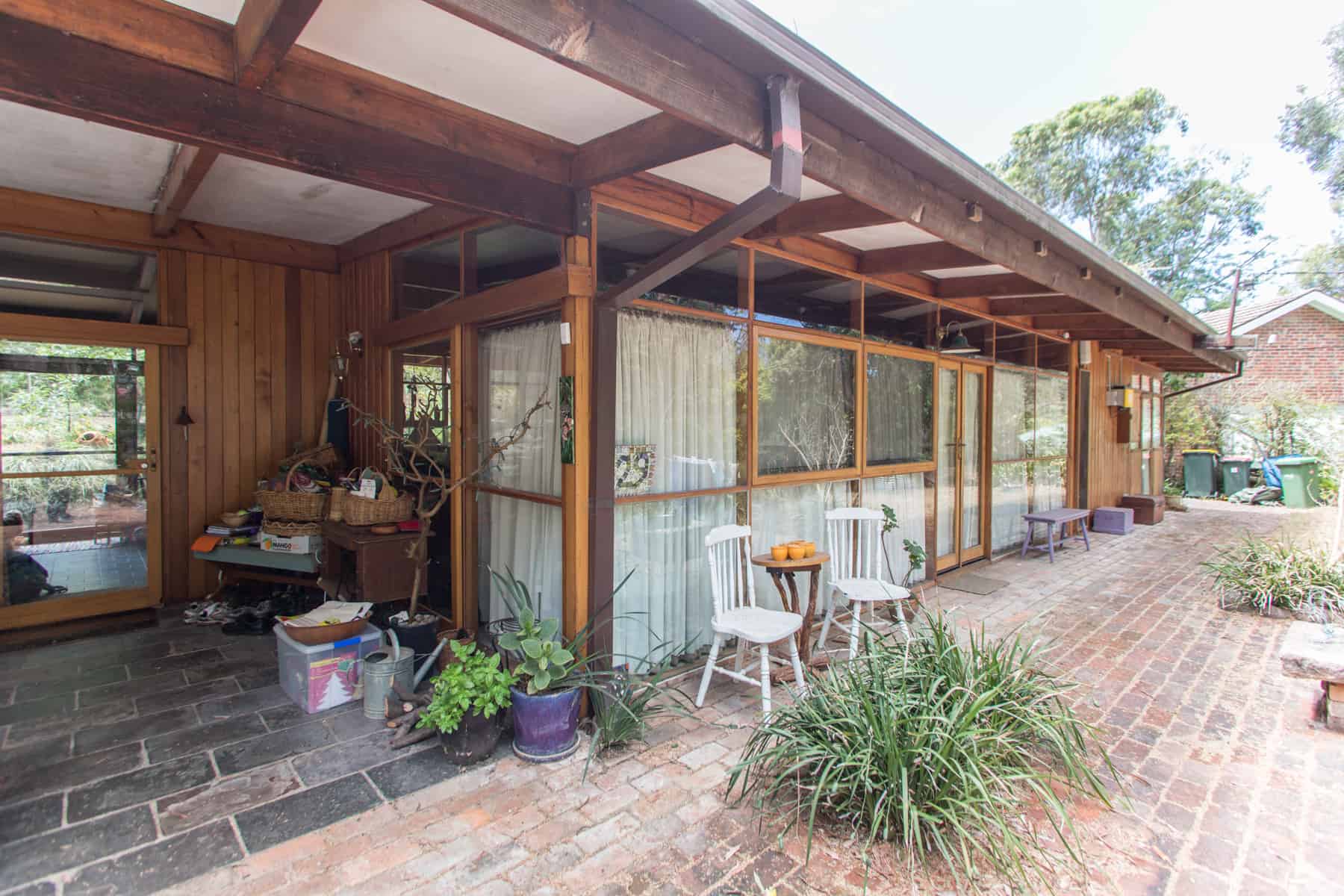 The first Knox house, the prototype for his modular designs

It became increasingly clear to me that any worthwhile contribution to the Australian domestic-building scene had to be applicable to a two- or three-man team because the great preponderance of building was done by such groups. The Bienvenu 'Welcome' saw bench became a basis on which I planned the first truly modular buildings in Melbourne and, as far as I can ascertain, in Australia. Nearly fifteen years later, these methods have only been copied by certain groups. Generally these have been men who worked for me, and who had seen the method in action.

The building plan was to get a roof on a house as quickly as possible. It should still be the same aim. Certain packaged houses use this method today. They still represent a small proportion of buildings constructed. With intelligent organisation we did this regularly in four days from the time we started the carpentry. The excavating and slab work had been done in the meantime. With planning that would easily be provided, it was possible to start the slab and wall construction simultaneously, and complete them at the same time. The walls were made up in our joinery and delivered and fixed immediately with special nails onto the concrete slab. The roof members were all heavy-dressed oregon which were delivered straight from the merchant fully prepared for use.