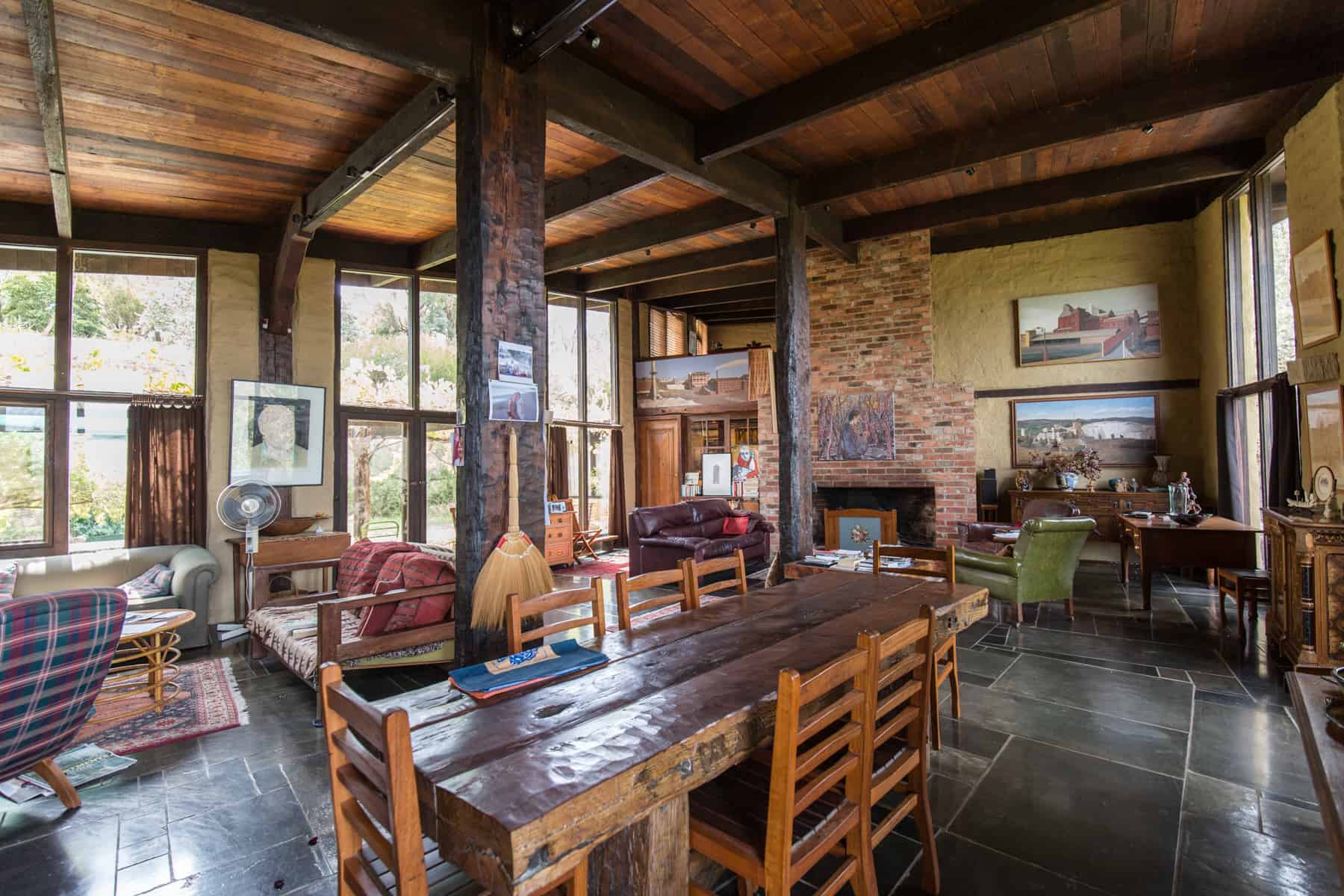 Maurice Wilson was a well-built man with a dark beard and a friendly face. As soon as we started, I gave him work that required skill and understanding which would have caused almost any tradesman to make mistakes. It was a quite complicated task to add on this wing, without disturbing what was already there. Maurice subsequently told me, 'I didn't know what you were doing for the first four days', but as he cottoned on to our local building vernacular, he turned into a natural. He had a most unusual capacity to visualize construction and anticipate where the complications could occur. I feel he must have spent several hours in bed each night going over the next day's work. He could sustain long periods of concentration and never seem to grow weary of it. His measurements were exact and he had the makings of a great natural builder.

I thought he was so good that I should send him on to Macgregor who was in charge of a large earth and post building at Main Ridge, Westernport. He seemed to be just right to bring that job to a conclusion, so I reluctantly arranged to let him go after three weeks. Our own job wasn't completed and I was wondering what to do next, when Tony Ryan called in the day before Maurice was due to leave and asked simply if he could work for me. When he told me that he had been a chair maker, I at once said, 'I'll give you $20 a day and show you what to do'. He agreed to take Maurice's place. It was a case of the cloak of Elijah falling on Elisha. The work proceeded as smoothly as before. I raised his salary to $25 a day, which was what I considered a grown-up apprentice should get. In another three weeks all was completed and Tony went on his way to join Maurice at Main Ridge. They both instinctively understood the special character of the work and appreciated Macgregor's sculptural capacities which he was always able to infuse into his structures.

Tony and Maurice proceeded from strength to strength. When their first small house after Main Ridge was finished, they went to work for Professor Jim Pittard.

The Pittard house was one of two houses being erected at the same time within a mile of each other. Both were employing the post and mud infill method, but the type of posts varied widely.

Jim Pittard was an old client of ours. He had added to his existing property in a variety of interesting ways. When Barbara, his wife, took me to see some land that was coming up for auction, I told her to buy it because they could no longer usefully develop their existing house. The proposed land was about eight acres with a superb view to the south, but it sloped so steeply in that direction that it was hard to conceive of a suitable building for it. The Melbourne climate in general, and this micro-climate in particular, demands a good northern aspect. It was probably this fact that caused the land in question to have been bought and sold several times in recent years. Each attempt to site a building came to nothing. It was obvious that a new concept was required to do the house and landscape justice.

After I sketched an abortive idea or two, I decided to sit on the land and listen to it and see what it was saying. When I got there the temperature was 40° Celsius, the hottest day of the summer and the hottest time of the day. On such occasions one is always apprehensive of bush fires, particularly around this spot. On several occasions, fire has started up in this area and in nearby Laughing Waters, one of the most notorious fire hazard areas in one of the most fire-prone places in the world. The shape of the slopes and the tunnel-like banks of the river can produce amazing spectacles of spontaneous combustion. Flames race down from the mountains on the northern boundaries of Eltham, driven by a strong north wind. Burning bark and leaves born on the gale are liable to alight miles away and start up new conflagrations. The tinder. dry bush and the volatile eucalyptus oil make a ferocious combination. When you sniff the first distant hint of their burning, it is impossible to remain unaffected. The eye scans the hills for signs of white and grey smoke and you can experience the district stirring into action. Through the valley the Country Fire Authority alarms in Eltham, Research and Kangaroo Ground wail in unison and can be heard for several miles. They create a sense of eerie apprehension across the dry, deserted landscape. The expanding smoke columns disperse in the middle atmosphere because of the strong wind and cast a shadow across the sunlight to turn it into a heightened, sickly yellow. Within a few minutes the roaring of the volunteer fire brigades can be heard and glimpsed racing through the bush to the scene of action. Their brilliant red-topped cabins, with a dozen madly flashing lights and electric bells clanging hysterically, form the most effective community-generating experience the district knows. They are followed by cars making their Way, half-hidden by dust, to join in the drama. The crews of the firetrucks are local tradesmen, barbers and fuel merchants dressed like cavaliers in a wide variety of deshabille, clinging on precariously as they hurtle along the winding earth roads, ducking under overhanging branches.

When I was assessing the natural genius of the Pittard land, it was just such a day. Within a minute or two it was clear to me that it was a desperate site that needed a desperate remedy. Nothing was to be gained by temporizing with it. I immediately resolved to spend about $4,000 cutting a large plateau out of the solid stone base that lay under the innocent-looking grass slope, and design a building that curved outwards to the southern aspect to form a concave arc to the north. In combination with the vertical stone excavation, it would make a generous oval-shaped courtyard for winter living. When the excavation was complete, the stone wall gave promise of providing a natural waterfall sixteen feet high, with a native bush gully garden below at the house level, in the best 'indivisible house and landscape' tradition.

Jim Pittard was a Professor of Microbiology at Melbourne University and, by felicitous circumstance, some ancient ten by eighteen inch posts of King Billy pine became available as we looked for columns to build with. They had been underground for many years as a drain and were impregnated with dark, penetrating preservative that made them smell like tall, dark, mysterious beings from some remote quarter of Africa. King Billy pine is one of those special Tasmanian timbers, similar in spirit to Huon pine, that lives to thousands of years. That timber has almost disappeared and, when another stand is discovered in some wild hidden gorge of the Gorden River, the timber wolves swoop down and rip it out. King Billy pine, which likewise has become rare, is a soft wood of durable quality and character. It is a strange phenomenon in the Australian environment, especially in Tasmania, an island that stands in the path of the Roaring Forties. Over the lifetime of the world these winds have carved its lonely western shoreline into a prehistoric wilderness of great power and mystery. Could it be that King Billy pine was originally a South American Amazonian timber that made its way to Tasmania in the dateless past, by its seeds being carried by the Roaring Forties half-way around the world, then germinating in a secluded valley? I could imagine how Jim would feel about it. He fell in love with its strange character as soon as he started to adze it. Several of these posts now stand in the middle line of the house and it is possible to walk all around them. By the time he had finished adzing, he saw them as living elements. I am sure that as he lay back in bed after a long day's work, the three words that occupied his mind were 'King Billy pine'.