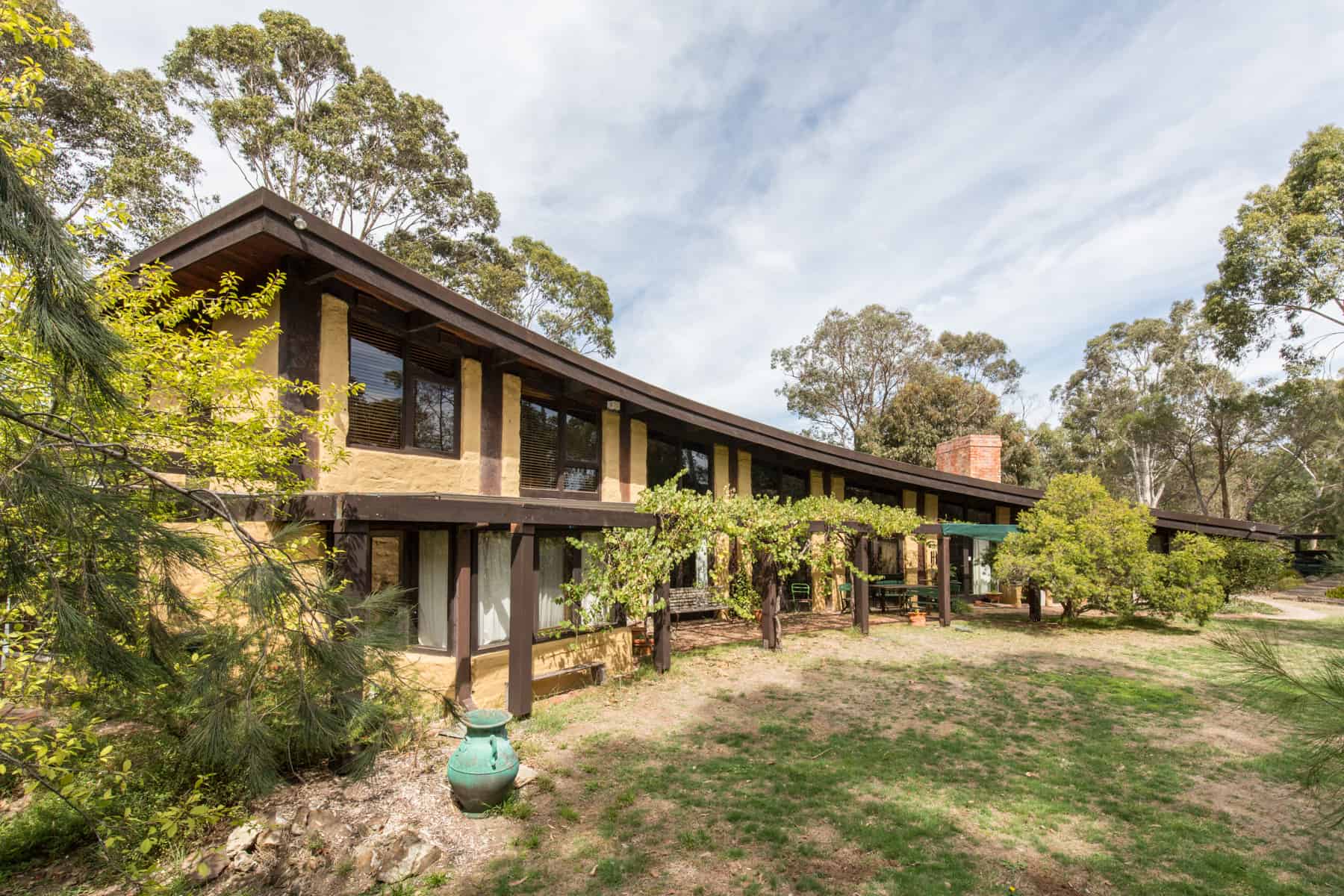 Returning to more personal things, we are sitting in this magnificent mud brick house at Eltham. This is the house that you and Barbie built. I believe that you had mud brick extensions in your first house at Montmorency and now you?ve built this terrific, wonderful house. Do you want to tell us about this?

We had a little wooden bungalow in Montmorency on a block with two big white gums on it, it was lovely. When we came back from the States, we adopted two little girls a year apart. So then in the family there were the three kids and the house became a bit small. Barbie, who knew about these sorts of things much more than I did, got Alistair Knox to design a room on the end of that Montmorency house, and it was lovely. It was typical Knox: slate floor, exposed timbers, big windows and a great big fireplace at the end, and we loved it. We got so turned on by that that we started digging out under the house, making mud bricks. We made a room under the house for Christopher. Christopher made a cubby, down at the corner of the block, out of mud bricks. Interestingly, we went back there the other day, 30 years later. The current occupiers of the house had converted that cubby into an office. So we were all fired up by mud bricks. We even put mud cladding on the timber. We put up chicken wire and mud, so you had fake mud walls.

In 1977, I was in Adelaide attending a course on recombinant DNA technology given by Ken Murray and Noreen Murray. Barbie rang up and said, ?I have found the block of land that we?re looking for,? and I said, ?That?s very interesting.? She said, ?There?s only one problem.? I said, ?What?s that?? She said, ?It?s being auctioned on Saturday? ? and I was getting back on Friday. So I said, ?Okay. I?ll ring up and have a chat with the bank manager.? Prior to this, every chat I had had with the bank manager had been remarkably negative. So I was quite surprised when I rang him up and said, ?We want to buy a block of land, what about borrowing money?? and he said, ?Yes, sure, no problems. You can go right ahead.? The bank agreed to lend us 40 grand. I came back Friday night. We rushed out here and walked around the block and thought, ?This is really good.? We came to the auction the next day and I think we were the only bidders, except for someone that the real estate agent had paid to push the price up. Anyway, we bought the block for $42,000 and then we went about selling Montmorency. We sold it for about $50,000, which was a steal.

We got Alistair Knox to design us a house. In the first design the house was up by the fence somewhere. Barbie looked at it and she didn?t like it much. We went and saw Alistair. We were sitting there and Barbie said, ?I don?t like this, Alistair ? dull and boring.? Alistair looked at it and he said, ?I don?t either,? and he ripped it up and put it in the bin. Then he came out, sat on the block and looked at the way the hills went. He decided the only thing to do with this block really was to make a big excavation, cut out this large amount, push it over and build half the house on fill. Then we had a design that we wanted.

Next I got a builder. But, after a week, the builder discovered how little money we had. I said to him, ?This is the situation. We?ve got 40 grand and I want you to build until that?s all used up and then stop. We?ll finish after that.? He said to me, ?No, I can?t do things this way. I?m off.? Then Alistair arrived with two young blokes and introduced them. He said, ?This is Tony Ryan and Maurice Wilson.? Tony was a carpenter and Maurice had been doing medicine. He had got to the part of his medical course where he was involved with patients and had decided that he didn?t want to be a doctor. He took himself to Alistair?s house, knocked on the door and said, ?I want you to make me into a builder.? Alistair said, ?Come and work for me. I?m extending and you can do this sort of stuff.? Tony Ryan and Maurice Wilson did most of the building, but Alistair persuaded me that I could be the owner builder. I could subcontract and do all sorts of things, including things I wouldn?t normally have thought of doing. We were away.

Is it true that PhD students had to make a certain quota of mud bricks before they graduated?

A very interesting observation, Michael. We only had people helping us on one or two occasions and, although those occasions were much more enjoyable socially, we never got any more bricks made. The best day for making bricks was when Barbie and I were just slogging away. The other thing we did was to rush around buying timbers. All the timbers in this place are second-hand. All of these lovely Oregon rafters came out of a picture theatre in Sydney Road that had been burnt down in a fire. They supported all the dress circle. So we got all that. The great big king billy pine posts were bridge timbers. They were covered with bitumen and had nails in them and we had to fix all that up. All the red gums came out of the wharves down at dock 19 where they were pulling them out. During the winter, when we couldn?t make mud bricks, I bought a couple of adzes and we adzed all the big posts. It would take me one weekend to adze each post. We adzed them and we oiled them. We got all the ceiling boards from an old house in Toorak. We took the nails out, turned them over and oiled them. We were incredibly optimistic, Michael. I?m glad that, when we did it, I didn?t really understand what we were doing, because it was a massive task.

What is the grand design thing where they are always going over budget? Yes, we would have been right in there. We didn?t have enough money, in the end, to get the kitchen finished. I bartered what tools I had bought to Maurice. I gave him half the tools I had to finish the kitchen.

We had some pretty funny experiences. We had rented a place in Bonds Road while our house was being built, but of course it wasn?t finished before the rental was up. So we got out of the place we were renting and put a couple of caravans on site. We were living in the caravans. Somebody complained and then the council moved us on. So we moved into the house. We shouldn?t have been in the house because we didn?t have occupancy, but we moved into it. We didn?t have water. We didn?t have electricity. We used to have a fire and boil up a big pot of water to wash the children. One occasion, very Monsier Houlot-like, we were in the tiny little caravan and I was on some government committee and they sent a big limousine with the chauffer to pick me up and take me to the airport. I can still recall when this limousine nosed its way into the building site and I stepped out of the caravan in my suit and tie with my little briefcase heading off to Canberra. But it has been a fantastic experience. It is a wonderful house. It is 30 years old now and it doesn?t look a day old.