My twelve years of intensive Christian youth work also terminated during that year when our church appointed a new young minister who, it was hoped, would be able to give our unorthodox methods a more professional character. Youth fellowships in churches go through phases - and ours was moving towards its end - but I am glad that I bore no responsibility for its demise a few short months later. There was a decline in my church activities in general, although I was still an accredited lay preacher who took services in various places in both suburban and country areas. I was still discovering how Christian beliefs had affected my attitudes in daily life, and that there was a sense of direction as to where I should be. It is beyond question that whether we believe in a Creator or not, we all receive ideas and opportunities from outside ourselves that affect our lives. It is where these directions lead us that determines their ultimate worth or worthlessness. Our consciousness is the iceberg tip of the subterranean spirit life that dwells below the surface.

Gough Whitlam with wife Margaret at his 1972 election victory party

Australia had declined in its national status over the previous twenty years. Its ambitions had become self-centred and introverted. Introspection had slowly declined into self-congratulation as our reawakened colonial climate prevented us from having to make the hard decisions. The Vietnam War had finally awakened many to the jeopardy we were in, and when the great day of the general elections arrived in December 1972 there was a new spirit abroad. As I went down to the Eltham village to vote at 9 a.m., there was a sense of anticipation in the air. It seemed to come out of the bush and the still, quiet streets as much as it appeared in the faces of my friends. We all sat glued to the television when polling closed, to await the result. As soon as it became apparent that Gough Whitlam had won, our little election party sat back in ecstatic unbelief. The Conservative supporters were numb with incredulous disbelief. The impossible had happened! Events later proved that Eltham had voted an unheard-of seventy percent for Labour and that the 'litmus' Diamond Valley seat had gone pink. The overall result was decisive, but not overwhelming. I had been over-confident because I lived in the centre of an area of change. It had been the outer fringes of Sydney and Melbourne - the most advanced sections of the country - which had swung. Elsewhere, the results were polite rather than positive.

The election was only for the lower house, and the Opposition still controlled the Senate; but Whitlam and Lance Barnard, his deputy, quickly formed a two-man cabinet and passed through a series of resolutions which began with the immediate withdrawal from Vietnam and an amnesty for all Australians who had gone into hiding and who were being hunted like criminals when they refused to join the conscript army. Over ten consecutive sitting days, a contentious issue was passed each day without a word of dissent from the Opposition or the Senate. It was the quickest, cleanest legislation possible. In the New Year, however, a different situation arose. The Conservatives reacted as though they had just awakened from a nightmare, and they set up unconscionable scenes in the house. Labour had a considerable number of good men, but they were woefully short of experience, of which the Conservatives had a superabundance. The upper house threw out a variety of bills and made it very difficult for the government to bring about the changes it desired, and for which it believed it had a mandate.

The environment, however, was one issue which did blossom under Labour administration. Tom Uren became the minister for Urban and Regional Development just when it was being predicted that Sydney and Melbourne would both grow to populations of five million by the turn of the century and that it would be necessary to create twelve new development areas the size of Canberra by that time to accommodate such an expansion. The possibility of this horrific eventuality was lessened by a cannon ball only one eighth of an inch in diameter: the contraceptive pill. The effect of the Pill was just beginning to make its presence felt. In a few years, we saw an almost zero-population-growth situation take place. During the same year came the realisation that there had to be a limit to growth because of the world's great oil shortage. At that moment, the known petroleum supplies would be gone within twenty years. Forests and timber resources and many other essentials of our current lifestyle appeared to be under just as great a strain. Men like Paul Ehrlich and Ralph Nader in the United States warned of the approaching twilight of the world. The great cities were becoming smog-choked, and the U.S. and the Soviet Union were threatening us all with a nuclear holocaust.

In Australia, however, the year 1973 saw the development of DURD - the Department of Urban and Regional Development. It sought to expand the City of Albury in the Victorian-New South Wales border and make it the first of the new-growth areas. At the same time, it extended financial aid to existing local governments, thereby enabling progressive councils to undertake a wider interest in their affairs. Traditional councillors at first tended to belittle these bounteous opportunities as a specious Labour ploy, but it was great news for councillors like me who saw environment-conservation and enhanced urban management as the right of every citizen.

DURD aimed not only to sewer all of the large unsewered areas of Greater Melbourne in seven years, but to produce a new standard of living and landscape amenity we would not have thought possible. The sewerage plan fell behind, but no fair-minded observer could doubt that the City developed an entirely different environmental spirit in twelve years. Forests of native trees and informal Australian landscape patterns appeared everywhere. Eltham had led the way twenty years earlier, and all street and park planting was of indigenous varieties. DURD would also give special grants to local authorities if they could produce schemes that would develop local character and spirit.

These opportunities occurred at the same time as the new plan for Greater Melbourne was unveiled for consideration. The venue was Monash University, on a Saturday morning in December 1972. When I arrived, the Great Hall seemed to be full, but as I proceeded towards the dais I found, as is so often the case in church, the very front row almost vacant. By arriving late, I had obtained the best seat in the house. 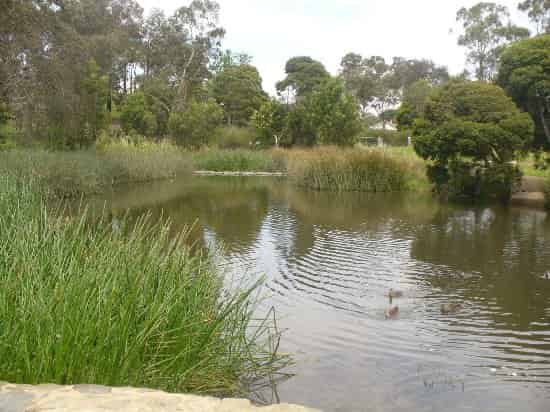 Alistair Hepburn and Simpton were the chief planner and deputy, respectively. I saw a lot of these gentlemen during the next three or four years. I was the right man in the right place as far as our local council was concerned, particularly as I had participated in the initial town-planning causes at Melbourne University under Neil Abercrombie more than twenty years earlier, before there were any town-planning proposals in existence. Gone was the roads-and-bridges syndrome as the end-all of local-government activities. My first major activity was to turn an unsightly tip site in the middle of our beautiful valley into an excellent park, complete with lakes, clump-planted native trees, and a botanic section modelled on a modest Capability Brown principle. At one stroke, it recreated the same beauty that had once made it the loveliest natural spot in the entire metropolis. I gained like-minded men to stand for Council; within two years we had a five-to-four majority in the Chamber, and environment and social welfare became the major issues of the day. In my four years as a councillor, we did not create a single new road in my Riding, except for those required by law in the case of new subdivisions. The old street trees were treated like venerable pioneers. Each one was preserved, and the old clay tracks that went around them remained as they had always been. Professor Seddon said it correctly when he remarked there should only be three types of local roads: bad, worse, and worst! The long-awaited change of Government initiated an entirely new attitude to our hopes and ambitions, particularly wherever natural landscape occurred.