When I received Christ into my life, I saw it as the capstone of the archway bridging between man and the Creator, and that the natural environment was made for Him rather than He for it. 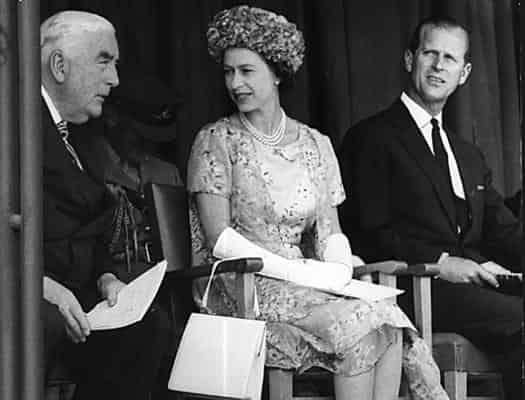 Robert Menzies with the Queen and Prince Phillip

When Mr Menzies took over as prime minister from Ben Chifley, he adopted a profile as aggressive as the latter's was unassuming. He took every opportunity to warn us that we only had a year or two to prepare for war with Russia. He then gained control of the senate and proposed that communism be outlawed. The Yes/No vote referendum that followed stirred the population in a way no other postwar issue had been able to. Initially it appeared that it would succeed by a large majority, but as week followed week the issue became closer. It was Dr Evatt's - the opposition leader's - finest hour. His courage seemed indomitable. Vote No signs began to appear on the roadways and in a thousand other places as a popular movement became apparent, informing the legislators what they could and could not do. The referendum was finally defeated, to the great relief of the more intelligent members of the society, who realised it represented the basis for a police state similar to that which we had so recently fought to protect ourselves from. It also heralded the return to postwar normality: every postwar restriction was removed, and the price was the loss of our financial independence. We have been in the grip of international exploitation ever since.

The optimism of the new society knew no bounds. Both jobs and money were still exceeding the commodities available, and the apparently unending supply of migrants took up the more humble positions, leaving Australians free to speak and to make choices in the job market. There was still work available, but it all seemed more gracious and gentle.

My planning turned towards using more-traditional materials in an environmental manner. I attended the second part-time course in town planning offered in 1950-51 at Melbourne University, mainly to help me understand what such an activity could offer, especially as the first Interim Development Order only became a fact in 1954. Despite its limitations, I found the part-time course stimulating. It was conducted by Neil - the son of Sir Patrick Abercrombie, who authored the Greater London Plan. The class employed an odd collection of lecturers; by far the most interesting feature was a series of talks on the history of cities, given by Professor of Architecture Brian Lewis, and another, on the three levels of government in Australia, by a 'Foo' Davies. My abysmal ignorance of these subjects was violently subjected to the mid-day brilliance of men who made their subjects come alive. I also discovered that all the other participants, who were mature men, had a much wider formal education than I did. I enjoyed the challenge of having to use my native intelligence objectively to overcome their traditional attitudes by majoring on men like Frank Lloyd Wright, whom they still regarded as something of an outsider. They saw Corbusier and Gropius and the European tradition as the mainline direction of modern architecture, while my Christian experience caused me to change towards 'broad acre' land-hugging concepts and wider social connotations. In addition, I soon found out that my lack of qualification was an insurmountable barrier to obtaining architectural-design work in the normal manner. The profession was busily guarding its successful students from the interference of those whose contribution was only designing and building skills. The word architect could no longer be legally used by anyone who had not gone through their examinations and been apprenticed with registered offices. The academic-meal-ticket philosophy was steadily setting up its own standards. Certain restrictions were obviously advisable, but it was my early experience that the academic practitioners in Australia were generally at their weakest in actual structure and building procedures, which I though were, in the end, what the profession was really all about. Vitruvius, the ancient Greek, nominated Beauty, Stability, and Utility as the three essential elements - with which no one would disagree. What the non-academics maintained was that the greater the actual building skill, the greater the opportunity of producing beautiful structures. And they had Wright himself to justify their opinions, for he was never an architect per se but a brilliant engineer and an innovative and spectacular builder. It was felt that beauty was the essential element and that it could not be taught, as could both stability and utility. It was possible to have the highest academic qualifications, and at the same time remain a stranger to the practice of architecture.

Australia was the land with the do-it-yourself philosophy where every man felt he had the right to do as he wished, especially in relation to the family house - a situation directly opposed to the professional designer. This attitude was probably as bad as, or even worse than, too much academia. Robin Boyd, the prophetic designer of the 1950s, correctly stated that 'Australia was the small house' that has left the building and architectural professions in a broad controversy which has never been satisfactorily resolved.

European countries had known centuries of established design before Australia's first house, Elizabeth Cottage, was built less than two hundred years ago. Nor did our convict beginnings promote the most stable conditions for a distinguished tradition, despite Francis Greenway's brilliant but eccentric contributions. The lower-middle-class bourgeoisie world I had lived in in Middle Park as an infant was low-cost and unadventurous, but it was socially stable and free. There had been no upper class to dictate the terms, as there had been in pre-First World War European countries. We were ignorant of international events in our antipodean isolation; but in places like Middle Park we knew all our neighbours, and they all knew us and respected us as equals. 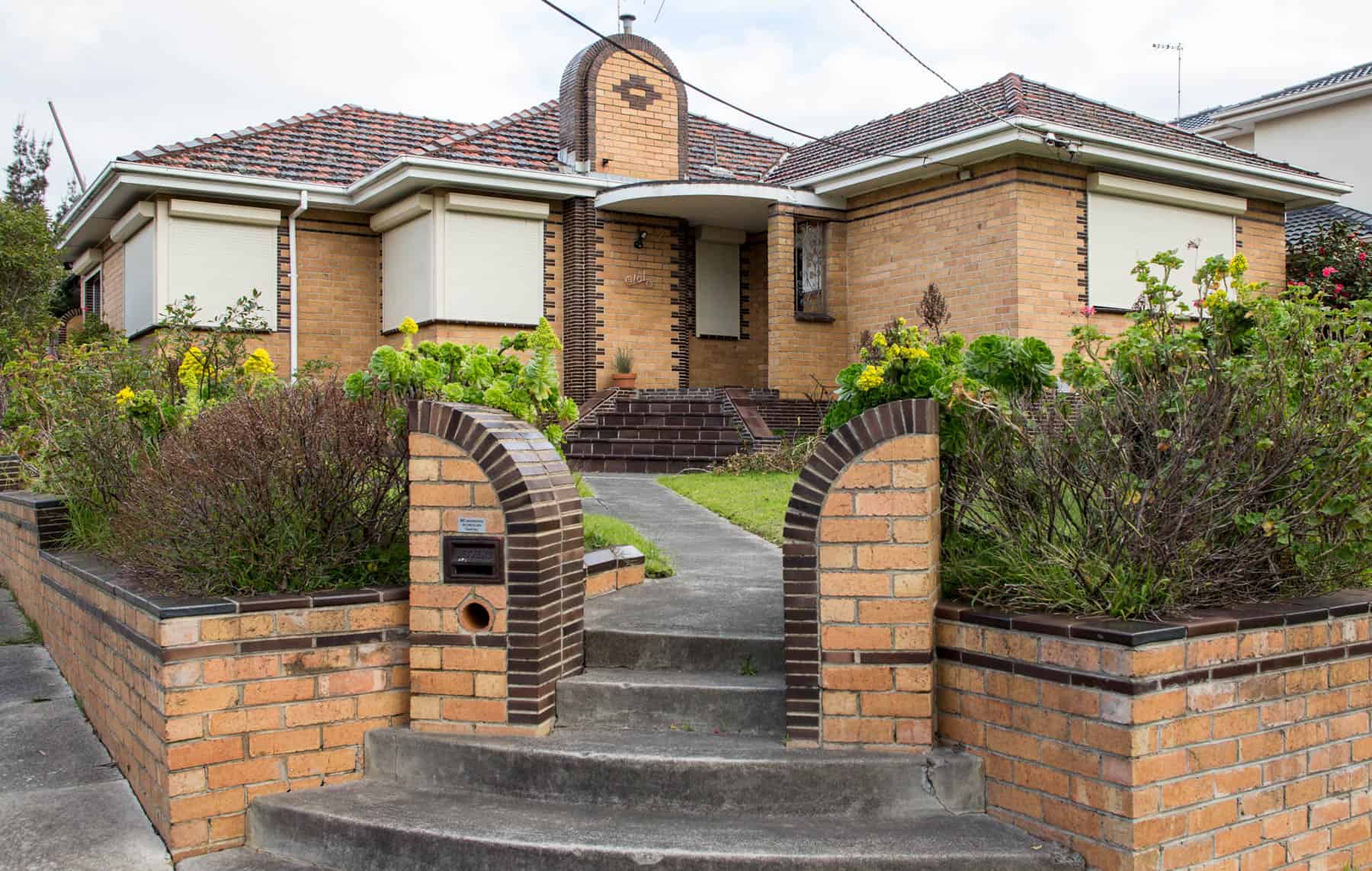 Although the new attitudes of the 1920s had produced pseudo-Spanish-mission houses and a variety of other innovations that were probably superficially innovative, our lives fundamentally remained very conservative. There was little doubt, however, that we were already becoming the 'small house', even though there was still scarcely a qualified architect in sight. We designed our own buildings, which had now become double-fronted with a passage down the centre the kitchen and bathroom to the rear, with washhouse and the lavatory in the backyard. Although fireplaces still constituted the primary means of heating, we enjoyed a liberty of space. Virtually every villa was surrounded by its own land. Flats were a rarity. It was the postwar euphoria of 1946 which raised our social-housing expectations. The rapidly increasing demand at first brought about new mannerisms but little architectural innovation. In districts like Moorabbin, it was quite possible to see up to forty consecutive houses, each set back twenty-five feet from the street and each with its similar terra-cotta-hipped roof. Planning was permissive, which allowed minimums to become the measure of design.

The use of environmental concepts offered a totally new approach. It became possible to consider design to be an extension of what the landscape was saying. The use of organic proportions, deletions of passages, and the effulgence clerestory light gave to the sloping ceilings a sense of light and colour indigenous to the timeless Australian land. Until that time, the verandah had been our major innovation, if one were to disregard the dictates of suburbanism and the postage-stamp subdivision pattern. We opted for the cult of cleanliness. It was much less controversial than being original or odd. We could all agree about showering at least once a day, provided Lifebuoy soap was used to let others know that we had done our social duty.

The golden years of the late 1940s gradually faded during the following decade. The Australian male, who had hitherto been basically lean and shy, began to grow brash and fat as he sought to keep control over the proliferating sea of migrants that surged around him. What he lacked in finesse was made up for in volume.

My conversion affected varying aspects of my life at different times. I may have believed in 1950 that I had changed comprehensively, but there were vast areas of my consciousness at that time that still had no idea what the new beliefs would require of me. Being completely separated from my first wife, I saw no reason why I should not live with Margot in a husband-wife relationship provided I remain faithful to her and accept the responsibilities the position required. I retained a proper concern for my and Mernda's three children; they were largely looked after by her mother, who lived with them in our large old house.