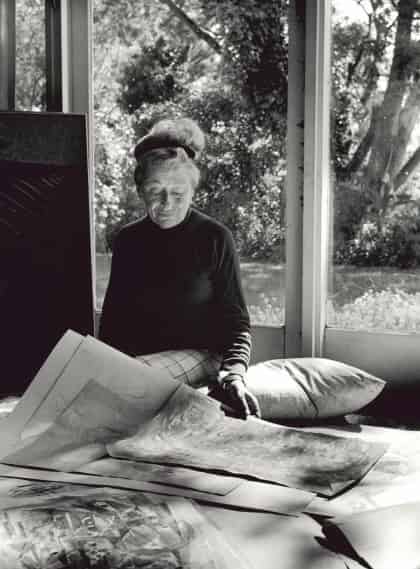 One day in 1948 I was approached by an executive of the Art Gallery of Victoria on behalf of four ladies who proposed to build three houses on a twenty-acre peach and apple orchard in Templestowe - a joint house for Polly and Guelda Pyke, and separate ones for Val and Yvonne Cohen. They were all unmarried at this stage, although Val was anticipating marriage in the near future and her mother proposed to live with Val's sister Yvonne in the second house. As the Pykes' was a joint building, the two women decided to occupy separate sections of the building, especially as Guelda required a private area for her work as a practising artist. They had independent means, and this gave me my first opportunity to produce three sizeable houses amid the pink and white plum blossoms that covered the northern slope and looked over the river towards Eltham. It was an idyllic scene, particularly as these would be almost the first houses that could be seen from that direction. This was before any orchards had been subdivided, and the unbroken pattern of fruit trees separated by lines of ancient pines had remained unaltered since the land was first settled by a largely German community a hundred years earlier.

I had opted for timber construction on concrete slabs because there was a slight improvement in the supply position and because I thought earth-building would prove too great a strain on my elegant artistic lady clients, no matter how they thought about it before it all began.