There were innumerable activities of a day-to-day nature that cannot be recorded, but John Serle, who was a painting student of Clifs for a considerable period, recalled some of the lighter community activities that mingled with and added sauce to the usual diet of painting and pottery.

Once Clif became fascinated with model trains and he and John worked for weeks onÂ· a most elaborate system of tracks and model landscapes and painting was never mentioned.

At another time Clif received a rare and unexpected cheque for £70, which was a large sum for him in those days. An 18 gallon barrel of beer was ordered on the strength of it. For some reason, it stubbornly resisted being consumed before the week-end by the assembled community. When John and Clif returned early the next week they continued on until it was all eventually drained and they had become much the worse for wear. 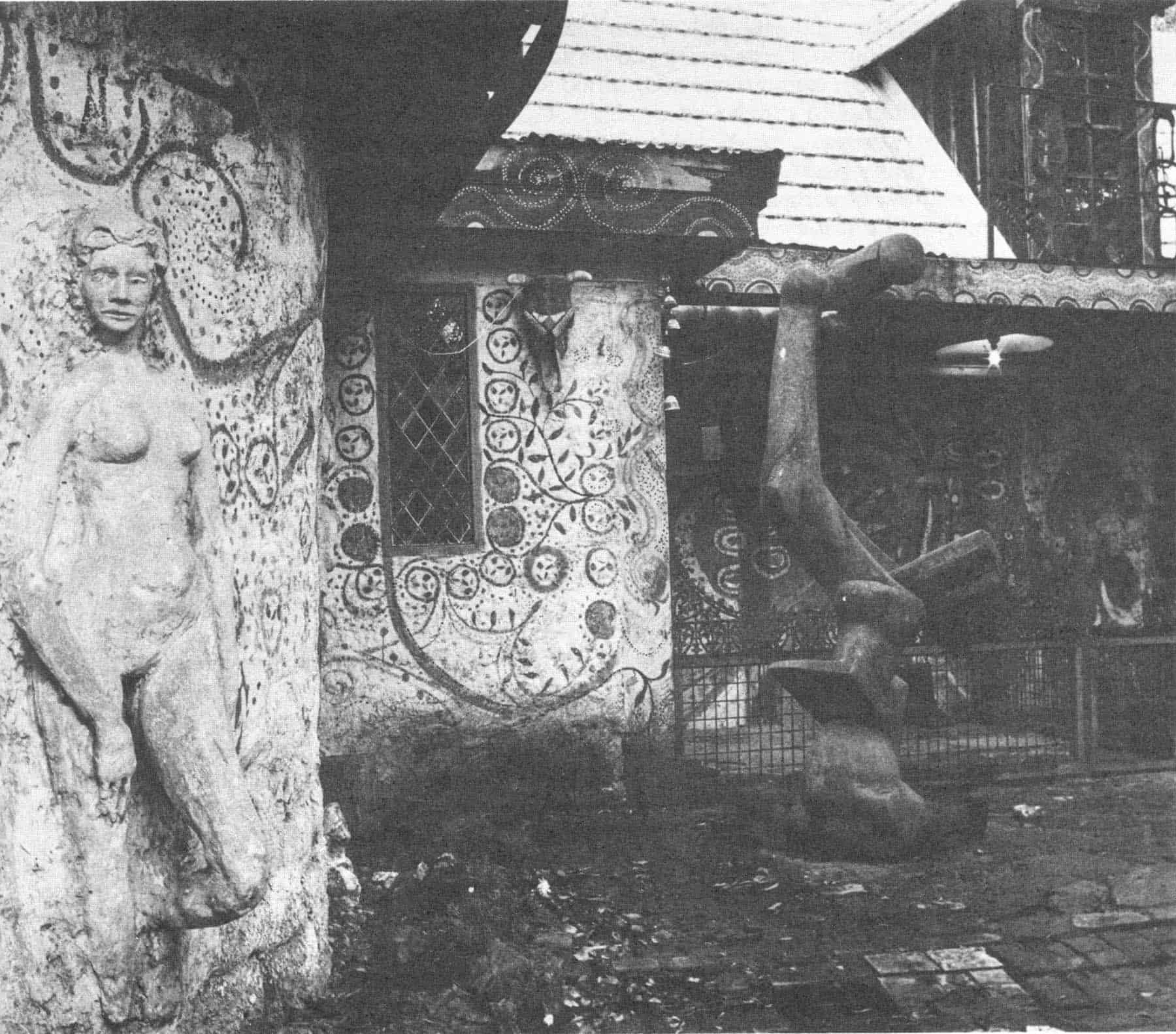 Cricket matches were also part of the lifestyle and at least once a year a challenge was thrown out by 'Royal Dunmoochin' as they called themselves, to attendants at the National Gallery, the Eltham painters and others. These teams were always heterogeneous groups drawn from all quarters to make up the numbers.

On one occasion, Larry Stevens had an Eltham team that challenged 'Royal Dunmoochin'. He took it very seriously and came attired in immaculate creams. It was John Serle's job to gather players from St. Andrews and district, because he knew everyone there, as he had always lived in the locality. There were two St. Andrews' teams. One consisted of casual social drinkers and the other were non-drinking people who took their sport seriously. John approached the casual drinkers on the Friday to find they were engaged elsewhere, so he had to call on the serious players who proved to be very professional indeed.

Clif arranged for Dunmoochin to put Eltham in to bat, so that they could ply the waiting batsmen with alcoholic refreshment to lower their batting efficiency, but they didn't have time. They were all out in two or three overs before an onslaught of well-directed bowling. Larry became indignant that his team was bundled out in this undignified manner. The situation reached a climax in the next innings when an opposing bowler who was naturally right-handed changed hands and still bowled out Captain Larry without scoring. He marched off in a huff muttering to himself that he would punch the bowler's nose in. The others all stayed and finally some thirty or forty batted against the opposition. John said he encountered Marlene running around the boundary shouting out, 'I don't know what the score is but it's F ... all', in that colourful language she could so capably employ.

John first came to know Dunmoochin through working with the Belots, from whom Clif purchased the land. He helped one of the younger Belots clear its regrowth for the third time. They lpaded their old Blitz buggy with thin stringy bark saplings that were used in 3'0" lengths for boiler wood. I remember hearing about it when I still lived in Heidelberg just after the War and buying some for our own open fireplace. It burnt quickly, but it made wonderful stacks about 10ft. long and 5ft. high. It used to excite John Perceval when he came to see us. Its generous size created a sense of wellbeing in him. It was like meeting an old friend when I saw it again up at Clifs.

They also drove up and down the tracks that have since become the bush roads which service the Dunmoochin settlement, chasing heifers. They caught glimpses of the early Dunmoochin buildings at times including a wall Clif had erected on which he had painted aboriginals and white women. One of a older generation of Belots had seen it at close range and pronounced it obscene. 'It showed everything the women had', he said, 'it was disgusting! It stimulated John to have a look for himself, especially as Mark Horton from the Hurstbridge Bakery had started to paint with Clif.

He first met Clif painting in a paddock and soon became involved in it all. He was amazed at the people he met there, especially Barry Humphries. I t must have been enlightening for a perceptive country boy. He felt it gave him an understanding of the key people in so many groups and activities of all kinds throughout Australia. They were the exciting times of the golden postwar decade. In John's nostalgic words, 'It seemed to come and go before we knew it was there'.

He recalled that it was a period when we had all decided to develop a Club Room to contain a complex for this group of individuals. Tim Burstall discovered a sub-floor area on the south side of Tasman House, a great old building opposite the Government Offices in Spring Street, Melbourne. it required the ultimate exercise of faith even among such an imaginative congregation to believe it could ever be made habitable. But we attacked it with earnest zeal on consecutive week-ends. The indescribable junk of about seventy years was transported to the tip by the truck-load in my truck.

Eventually, it began to look as though it would be suitable, so we decided to establish someone temporarily as caretaker until we could all quietly move in. It proved a fatal decision. We thought the girl we chose would be ideal for the purpose. She was artistic, but still worked in a sewing machine establishment in Melbourne and gave every evidence of being compliant and manipulable. It was only as the weeks rolled by that we discovered she had no intention of handing it over at all. She had manipulated us instead. She obtained a lease which she held until she left for Europe a year or so later to make a name for herself as a painter at her first exhibition which she held in Paris. By the time it became available, our enthusiasm had dissolved.

John Serle said that he and Clif were always arguing. Sometimes it was about Clifs jealousy because of John's friendship with the painter Bert Tucker, who lived a few miles away. At other times it was because he felt they could have done better building at Dunmoochin. John, who often worked with Clif in the earlier days, thought he was doing the worst building in Australia. Clif was always worried about trees he might have to cut down. In addition, he would never throwaway a piece of wood even if it had white ants in it. If John tried to get rid of it, Clif would dive on it and make sure it got into the structure. Matcham Skipper would then appear and flagellate Clif for building a wall out of Besser brickwork and further arguments would occur.

All that has radically changed over the years. Clifs house is now a series of enormous rooms and towering ceilings. I actually designed and built a wing composed of big posts and heavy timbers, which is now Clif and Judith's bedroom and private area. It was Judith, John said, who introduced modern plumbing, good kitchens and a swimming pool to the Pugh menage, but he continued doggedly, 'It could all have been so much better'.

Whatever may have been the real position, no-one can deny that Clif has become quite a gentle personality as the years have passed. He carries his success generously and I now find his judgements frank, unbiased and reasonable.

To bring his story up to date, it is necessary to make some reference to the Kerr- Whitlam controversy that has again erupted in the press during 1978 with the publication of their respective books. Clif recalled that he was painting a portrait of Governor General Kerr around the time of the Whitlam dismissal. As he always seeks to discover the character of his subject as he works, he could see the way things were going in the Governor General's mind. In vain, he contacted Tom Uren and other Ministers in Canberra to warn them of what was in the wind. They couldn't believe such a thing possible. Clif felt so certain of what he would do that it was a great relief to him to find his opinion vindicated when the bombshell actually exploded. He wasn't at all happy with the occurrence, but he was relieved to know that his judgement was correct in warning them. When I called to see him the day after New Year's Day in 1979, I found him in his Studio. Around him were partly-finished portraits of Mr. Hamer, the Premier of Victoria, Sit Gustav Nossal, Mr. Justice Samuels and other notables. He corrected me on one of their titles and I replied, 'I can hardly wait for the coronet to fall off your own head. Remember you haven't got a dirt floor any longer and it might break'.

Clifton Pugh is one of the best-known Eltham personalities who has come here since the War. He is still a great ambassador for the dry bush and the little ~ouncing hills, the wombats and the emus when he is in England painting the Duke of Edinburgh at Windsor Castle or other great figures from high places in Britain. He never moves away from his old loyalties and his perpetual input into the artistic dimensions of his own district ensure him of an enduring place in the hearts of all who know him.

Alan Marshall's claim that people didn't make Eltham, but Eltham made people, is still true, but there are few who have given back more to Eltham in return than Clifton Pugh.